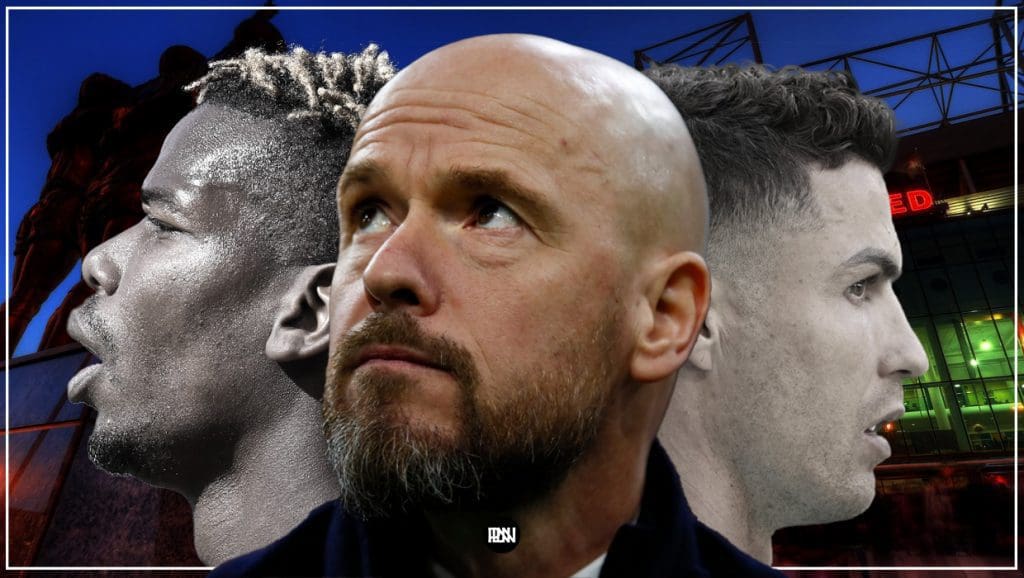 Manchester United are a club in crisis, an institution that has been steeped in mediocrity for the best part of the last nine years and change is strongly required at Old Trafford.

Knocked out of the Champions League, and all domestic cups stretching the club’s trophy drought to a frustrating five years for the Old Trafford faithful. To make matters worse, the way things are shaping up in the Premier League table as of right now, a respectable fourth-place finish to qualify for next season’s UEFA Champions League is looking even more difficult with each passing match week.

The current squad is simply not good enough, filled with household names who are performing exceedingly below expectations. With the reported imminent arrival of Ajax boss Erik ten Hag, the club will be embarking on a massive squad overhaul, with a whole mass of players leaving through the Old Trafford exit door this summer.

So who could they be?

Paul Pogba (contract expires 2022, midfielder): The Frenchman is bright and delightful in moments but never returns a single season of consistent, game-wresting brilliance like Kevin De Bruyne at Manchester City. It is evidently time to say a polite au revoir to the World Cup winner.

Eric Bailly (2024, defender): The 27-year-old should really be enjoying his peak years yet through no obvious fault of his own he is too injury-prone to carry on his United career. With the club aiming to recruit young, fresh and hungry players this summer, the Ivorian may well be part of the long list of players thrown out.

Edinson Cavani (2022, forward): Ole Gunnar Solskjær proceeded to extend the striker’s stay on renewed terms last summer but rather controversially proceeded to sign Ronaldo and the Uruguayan international was relegated to become a back-up. His commitment to the cause has often been left questioned throughout his short stint at Old Trafford, often deemed not fit enough by his own standards.

Phil Jones (2023, defender): Now 30-years of age, Jones is another player who has sadly failed to deliver on his huge promise at the start of his career. Recurring injuries year after year has not helped but its time the club cuts short his long stay. If Man United want to be ruthless with their recruitment and club business, they must finally let him loose rather than ludicrously offering him fresh terms.

Jesse Lingard (2022, forward): Was persuaded to stay last summer, yet he hasn’t been given the opportunities his obvious talents have warranted and relations with his boyhood club have obviously become strained. Lingard arguably out of all the supposed outcasts in the squad, is certainly in the most need of a fresh path in life, look what happened when he joined West Ham in January 2021. He must be afforded that same belief.

Anthony Martial (2024, forward): He was supposed to be the future of the club upon his arrival in 2015 and especially after his tremendous goalscoring record in during the Covid-plagued 2019/2020 campaign, but since then has found his opportunities limited, and will be looking for a new challenge at the end of the season unless Ten Hag deems him good enough to be apart of his plans.

Juan Mata (2022, midfielder): Has become Manchester United’s eternal substitute in the last couple of seasons – the Spaniard was once the club record signing but will be turning 34 next month and is reportedly on the lookout for a new challenge back in his native country.

Nemanja Matic (2023, midfielder): The 33-year-old is a two-time Premier League champion with Chelsea but age and fitness has reduced him to a plodding presence whose lack of dynamism sums up one of the many fault lines in the United midfield. The Serbian international has got to go.

Aaron Wan-Bissaka (2024, defender): Is pacy, agile and loves to tackle but too often anonymous in attack and in possession, something Ten Hag loves which means he may well be part of the exodus at Old Trafford, but who would take him on if the Ajax boss deems him not capable? Priorities in other positions mean he likely stays as a back-up option.

Cristiano Ronaldo (2023, forward): At 37 he should not be United’s focal point in the coming future. The club should and will be looking to rebuild up front, and Ronaldo may not be Ten Hag’s favoured solution. But which other club would take on his astronomical £490,000-a-week wage package? Offloading Ronaldo would be a headline statement but unless the player wishes to leave Old Trafford it seems unlikely he will.

Marcus Rashford (2023, forward): In his seventh career season he has become lost and lacklustre which is arguably as a result of his political efforts off the field. But given United’s forward options and his undoubted potential, he may remain for next term – unless he pushes for the move he is reportedly contemplating.

David de Gea (2023, goalkeeper): “I love the club,” he said after their exit to Atletico Madrid in the Champions League but the Spaniard is out of contract in June 2023 and through his inability to command the air, and his weakness with the ball at his feet, Ten Hag may deem him surplus to requirements in which the club may need to cash in.

Tottenham Hotspur vs Brighton: Match Preview | Premier League 2021/22
Lyon to ‘not trigger option to buy’ for Tanguy Ndombélé
To Top