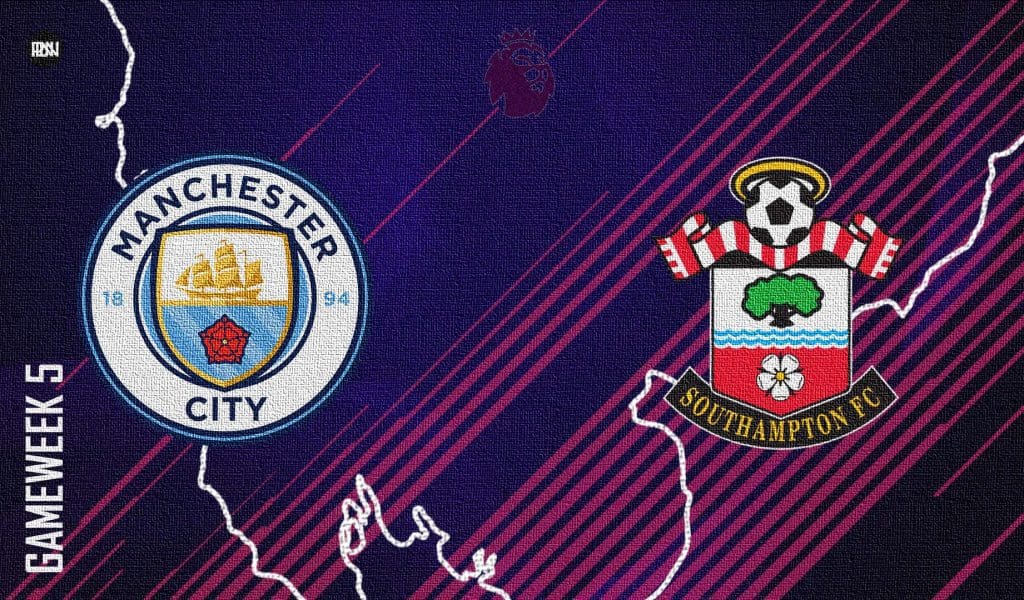 Manchester City hosts Southampton in the 5th gameweek of the season, as the Citizens look to register their 5th straight win in all competitions. After a slow start again this season and failing to pick up the Community Shield on the way to this season it looks like City have shaken off the cobwebs and cleared the rust from the cog. This Manchester City team is just dealing goals by the dozen, scoring at least 5 goals thrice already this season. Twice in the League and scoring 6 against RB Leipzig midweek in the Champions League. City are one of dominating favorites to win the league and with slashed odds, it’s a punter many are taking. Make sure to check out online betting sites if you’re looking to get in on the action.

This time they face a Southampton side that sits 14th in the Premier League table and who have started just the way they were expected to, but the Saints fans would have higher ambitions than their current league position. After a spectacular start to last season, it seems almost difficult to recognize this Southampton side. However, they have lost some really key personnel from their ranks.

Southampton haven’t won at the Etihad Stadium in their last 10 visits, losing on 9 of those 10 occasions, and also they haven’t managed a single clean sheet against City in 11 games. But the one statistic that does side with Southampton is the fact that they have scored in 15 of their 16 away games against Man City. If history is anything to go by then there is a fair chance that both teams will be finding the back of the net.

City will have to do without second choice keeper Zack Steffen this weekend, as the number two goalkeeper is still self-isolating following a positive coronavirus test. Aymeric Laporte and defensive partner John Stones both missed out on the Leipzig game through injury, but Stones is expected to make a full recovery for this game. For now, though his inclusion remains a doubt.

Kevin De Bruyne should again start in midfield, Ilkay Gundogan and Bernardo Silva could swap places in the starting lineup.

This game has all the makings of being a one-sided affair, some might say a Routine victory for Manchester City. Or that may be the case on paper at least, but football isn’t played on paper, all it takes is a moment to change the game. Southampton are the kind of team that loves being portrayed as the underdogs, Southampton have also had more time to prepare for this weekend’s fixture, with Manchester City being involved in Champions League action in midweek.

Whether that factor will influence the outcome of this game in any way is uncertain.

From Manchester City’s perspective, there is no need for them to change in any way, it could just be a case of finding the right pass at the right moment, Rodri and Bernardo Silva’s involvement in finding that killer pass will be an extremely important factor while the inclusion of Kevin De Bruyne would make things that much easier. And who better to unlock a defense with one single pass than the Belgian. The players look sharp and fresh and saying that Manchester City have a wealth of talent on their bench would be a massive understatement, so fatigue affecting the players is out of the picture.

The Saints must approach this game with a lot of caution, trying to stay organized when there is so much movement from the City players around them will be something that Hassanhutle would be working on throughout the week. Another factor for Southampton to consider is being careful not to throw too many bodies forward because City can hurt them even on the counter-attacks.

Southampton’s approach might be vital in the final result, this could be a potential Banana Peel Fixture for City, especially with this game being sandwiched between European fixtures.

The Belgian Magician that has a lock for every stubborn defence will be the Most Influential player for Manchester City, after being brought to full fitness, being rested properly through the start of the season, it might be finally time for De Bruyne to step onto the pitch in front of the ever adoring home fans. The PFA Player of the year will have to be on top of his game if he were to try and unlock the compact Saint’s defense.

Southampton have their own little magician, James Ward-Prowse and his right foot are all too familiar to Manchester City, who have fallen victim to his Set Piece shenanigans. He will be the Key this time around as well, finding the right pass on the counter-attacks and making the use of every single set piece that falls in the Manchester City half. Ward-Prowse will have to conjure something special if he has to beat Ederson however and it will be an interesting little narrative heading into this fixture.