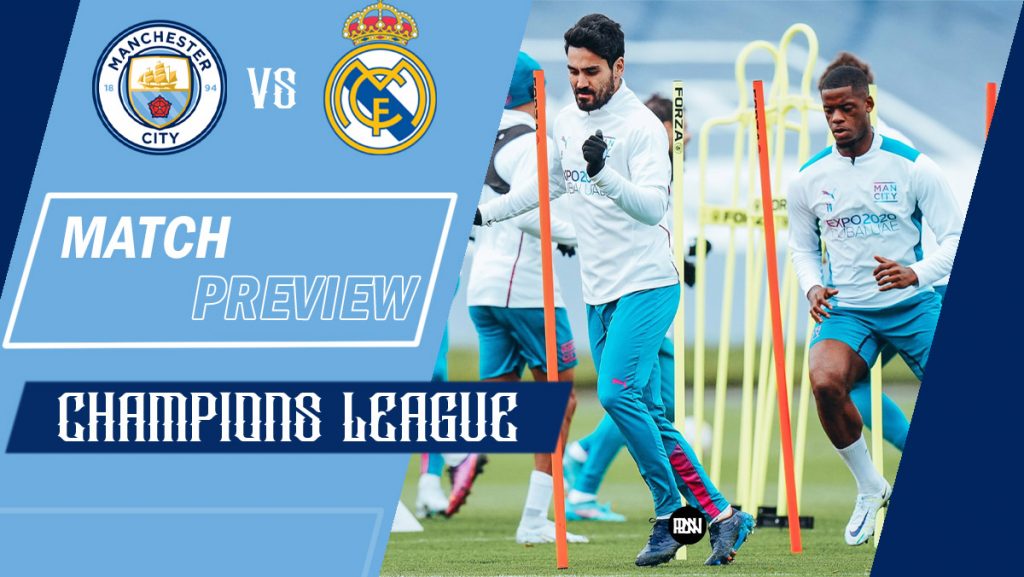 The UEFA Champions League is well known far and wide as one of the most coveted football competitions, and it is set to make a return this week, bringing us two blockbuster semi-final clashes. One of the fixtures sees one of the best and most consistent performers over the last few years in Man City taking on 13-time UCL winners and one of the biggest clubs in football, Real Madrid on Tuesday night at the Etihad Stadium.

Manchester City have increased in popularity over the last few years, especially since the arrival of manager Pep Guardiola. The Spanish manager has instilled a beautiful playing style and formed a squad full of talented players at the club, making it hugely popular around the world. They have had heaps of success in domestic football, with the Citizens falling short on the European stage time and again. That has been a source of constant criticism for the Spanish coach and the club, with their failure to win the big-eared trophy for a number of years now. However, they have become a force to reckon with, and are now the favourites to win the trophy. They moved one step closer to achieving that dream with their win against Atletico Madrid in the quarter-finals, overcoming the staunch and disciplined defence of the Rojiblancos.

Man City have been in imperious form of late, only losing twice in the last 5 months in all competitions. They are an incredibly hard team to beat, with the quality of players all over the pitch better than most teams in Europe. Pep Guardiola has been handed a tough draw in the semi-finals, but City are not one to shirk away from a challenge, and he will be confident of beating the veterans of the competition.

Real Madrid needs no introduction to the Champions League and the Spanish club have for long made this tournament their own. A record 13 title wins has seen them steer clear of other competition like Liverpool, AC Milan and Bayern Munich by some distance. The Los Blancos had a tough route to the semi-final stage, having to battle past the likes of Inter Milan in the group stage, and then Paris St. Germain and Chelsea in the knockout stages of the competition. The league title has been almost wrapped up for them, and Carlo Ancelotti and his men can now fully focus on the Champions League title. The Italian coach will be hoping that Pep Guardiola’s superb record against Real Madrid will not deter his squad from winning the tie, especially away from home at the Etihad where City have been almost unbeatable this season. The Los Blancos are coming off a superb 3-1 win against Osasuna in the midweek, and have had a few days of rest more than their opponents on Tuesday night.

WHO WILL COME OUT ON TOP BETWEEN THE NEWBIES AND THE VETERANS?

Manchester City versus Real Madrid is a clash of titans, with the fixture coming up at the best possible time for both clubs. Both clubs are leading their respective leagues, City just a point ahead of Liverpool, while Real Madrid sit very comfortably at the top, having opened up a rather unassailable 15-point lead over Barcelona in second. Both clubs have been playing some of the best football, with beautiful playing philosophy and a dominating playing style.

It is a clash that brings with it a lot of excitement. City and Real, both have a lot of star power, and fans are eager to see the respective duels. It also brings two of the most experienced and tactically brilliant managers face-to-face on this stage for the first time since Real Madrid played Bayern Munich in the semi-finals in the 2013/14 season, with Carlo Ancelotti leading Real and Pep Guardiola managing the German juggernaut. That particular tie ended in a brilliant 5-0 win for Real on aggregate, and Pep will be hungry for revenge on the Italian coach.

This fixture also brings to mind the last time these two sides met, in the last 16 of the 2019/20 UCL season. City were the decisive winners throughout the tie, winning both legs 2-1 as they progressed to the quarter-finals of the competition.

The recent history between the two sides makes this clash even more spicy, and there is a lot at stake for both teams. Man City are chasing their first-ever title, while Real Madrid are looking to break their own record with a 14th title win. There is a general feeling among football enthusiasts that this game will be decided by more than just tactical brilliance. Both clubs are hungry for success, and both will not stop at anything to get there.

Tactically, Pep Guardiola has always set his team up to dominate possession and let the other team have very little time on the ball. He insists on his defence playing a high line and is always urging his fullbacks into more advanced positions on the pitch. Players like Gabriel Jesus and Raheem Sterling often play on the shoulder of opposition defenders and make runs into the box which are more often than not picked out superbly by Kevin de Bruyne, Bernardo Silva or Ilkay Gundogan.

Interestingly, Real Madrid have played a similar style under Ancelotti this season, with the ever-present midfield trio of Toni Kroos, Casemiro and Luka Modric able to pick out the runs of Karim Benzema and Vinicius Junior. They will look to exploit the high-line that Manchester City defence play, and will have the runners on alert for any tiny shred of space and opportunity. Ancelotti has made a few changes to the team and the philosophy that he took over from Zinedine Zidane. One of the major upgrades was making Los Blancos one of the most dangerous transitional teams in European football. With their lethality on the break, Real Madrid are able to adapt and play against any defensive setup the opposition throws at them. They are able to break down deep blocks with ease and are also able to expose high defensive lines when needed.

Talking about formations, Man City have played with a 4-3-3 for most of the season, with Pep using a 4-2-3-1 against Liverpool in their FA Cup defeat to counteract their aggressive pressing, and on the weekend against Watford, where he started with Fernandinho and Rodri as the two holding midfielders. However, he will be expected to go with the 4-3-3 again on Tuesday night against Real who plays with the same formation. Real Madrid rely on their superb midfield to bail them out in tough situations, but also have options like Eduardo Camavinga off the bench to shore up the defence when needed.

It will be a game of chess, with both sides in their best form and filled with talented and world-class players to the brim. It will be an end-to-end game, and if past fixtures are anything to go by, this could turn into one of the games of the season.

Injuries and player unavailability could play a huge part in the showdown at the Etihad, with Manchester City fullback Joao Cancelo ruled out after picking up his third booking of the competition. Kyle Walker is also a doubt for the game but could be fit for selection if he passes a fitness test.

Real Madrid have a few injury concerns of their own, with midfielder Casemiro and defender David Alaba huge doubts ahead of Tuesday night. There are also concerns over the availability of Ferland Mendy for the first leg.