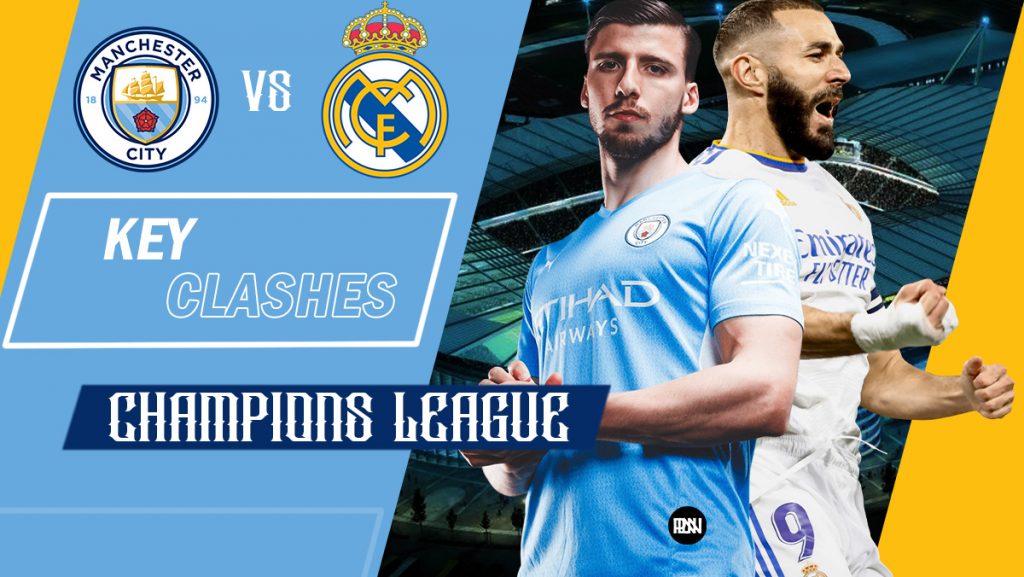 Mouth-watering clashes await as Europe’s most prestigious club sporting competition moves into its latter stages. After a brisk period of group-stage fixtures followed by a string of swashbuckling results in the knockout stages, only four teams remain as the race for the Champions League title grows increasingly intriguing.

Amongst the four clubs left in the competition, two powerhouses of European football face each other in what is expected to deliver and compelling battle later this evening. Arguably, amongst the best teams in world football and fresh from a tenacious victory against Atletico Madrid in the quarter-final stage of the competition, Premier League title-holders Manchester City host 13-time European Champions Real Madrid in what is likely to emerge as the most compelling fixture of the semi-final stage.

With both clubs amongst the favourites to win the competition, lip-smacking battles await viewers as two of the world’s most eminent managers in Pep Guardiola and Carlo Ancelotti face each other at a crucial juncture in the competition. However, besides the battle of tactical nuance, the fixture is also expected to provide for some intriguing clashes across the pitch.

With players from both sides having shown palpable desire and fortitude in their quest for the European title hitherto both managers will be looking to extract the best out of their respective squads later this evening. Expected to provide a thrilling watch, in this article, we take a look at key battles across the pitch most likely to emerge as the determining factors in the final result across the two legs of the tie.

Having consistently delivered on the big stages, Kevin De Bruyne is, yet again, expected to play a pivotal role if City are to qualify for the finals of the competition. Heading on the back of bagging two assists in the team’s 5-1 win against Watford in the Premier League last weekend, the Belgian’s precision and mentality is likely to prove vital if Guardiola’s side are to secure favourable results over the two-legged tie against Madrid.

On the other hand, with Casemiro’s availability to be determined by a late fitness test, youngster Eduardo Camavinga remains most likely to hold the midfield alongside the comparably experienced Toni Kross at the Etihad. Having delivered impactful cameos over the two legs against Chelsea during the quarter-final stage of the competition, the Frenchman faces a relatively superior midfield later this evening. Nevertheless, given his composure and overall technical ability, Camavinga is expected to remain a significant cog in Ancelotti’s tactical set-up later this evening.

Likely to be at the heart of the midfield battle, both De Bruyne and Camavinga will be keen on nullifying the others’ impact on Tuesday. The former’s intelligence in movement and attacking spaces combined with his technical ability could emerge as the determining factor in securing a result at the Etihad whilst the latter’s promising displays alongside his versatility has the potential to disrupt the home side’s transitions. With both players having been vital to their team’s progress in the competition, a tenacious challenge for midfield dominance awaits viewers later this evening.

A vital part of City’s adopted philosophy on the pitch, Rodri’s contributions are likely to prove vital if the club are to secure a result over Madrid later this evening. Having been a consistent figure in the midfield under Guardiola, the Spaniard’s ability to dictate play alongside his tendency to contribute in attack could potentially overwhelm the opposition’s defensive duties at the Etihad. However, coming up against an enigmatic playmaker in Luka Modric, Rodri too could potentially be overshadowed by the Croatian’s impact on Tuesday.

Having played a vital role in Madrid’s progress throughout the former stages of the competition, Modric’s experience and impact will remain vital to the visitors’ prospects of securing a favourable result at the Etihad. Granted a rest in the team’s latest outing last weekend, the midfielder is expected to slot back into the starting line-up; deployed as a playmaker in a midfield three, expected to swiftly utilise possession alongside anchoring the team’s attacking transitions on Tuesday.

With both players expected to play a key role in determining the result over the two-legged tie, the midfielders are likely to remain at the heart of the final score later this evening. Having delivered substantial contributions throughout the competitions, an intriguing battle awaits, with both Rodri and Modric likely to deliver key contributions for their respective sides at the Etihad.

Expected to remain a pivotal figure if the English Champions are to secure their place in the finals, Dias will be keen on delivering an impact performance at the Etihad. A commanding figure in the backline, the Portuguese international will be facing another figure of the same ilk when he comes up against Madrid’s most crucial player in Karim Benzema, later this evening.

Vital goal contributions by Benzema seen him majorly contribute to Madrid’s win over Chelsea in the quarter-finals. Having been amongst the most impactful players across Europe’s top leagues this season, the Frenchman is likely to play an ineffable part if Los Blancos are to secure a place in the finals of the competition. Moreover, having shown indefatigable application on the pitch throughout the season, Benzema emerges as Madrid’s most potent threat in the attacking front later this evening.

With both sides expected to create goal-scoring opportunities, the tie at the Etihad is likely to provide a compelling match-up on Tuesday. Given the desire to secure European glory palpable across both clubs, the semi-final clash between two of Europe’s most elite institutions has the potential to serve up the start of a memorable match-up across both legs, starting this evening at the Etihad.