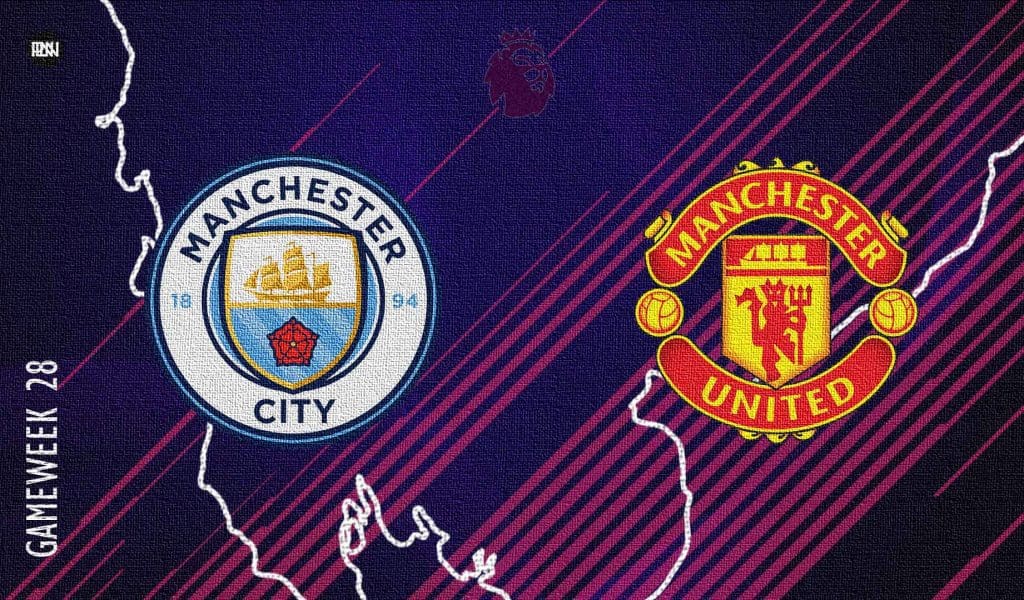 The Manchester Derby is one of the most awaited fixture in the Premier League calendar. Manchester City are six points ahead of Liverpool. Man United are fighting for a spot in the top 4, with the likes of West Ham, Arsenal and Tottenham Hotspur right in their tails.

In recent history, this contest is in the favour of the away side. The Red Devils last tasted defeat at the Etihad Stadium back in 2018. However, the spoils are equally shared in the last 5 meetings, with both the teams winning twice and drawing once.

Phil Foden scored a late winner against Everton to take City 6 points clear of Liverpool. The Toffees battled hard and gave a fight, but the champions overcame it. Meanwhile, Manchester United only came away with a point against Watford. They had 22 shots and outplayed Watford throughout the game, but United’s frontline were not clinical.

Pep Guardiola confirmed centre-halves, Nathan Ake and Ruben Dias both suffered minor injuries against Peterborough United. They were taken off at halftime because of their respective injuries. He stated that Dias ‘was not feeling good in his leg’. John Stones and Aymeric Laporte came in as their replacements, and are in line to start the Derby.

Jack Grealish and Gabriel Jesus, who were out for a month with their respective injuries, started on Tuesday. The Englishman also scored a goal and will hope for a spot in the starting XI on Sunday.

Raheem Sterling, Rodri, Bernardo Silva and Kevin De Bruyne were rested for the FA Cup tie, and are most likely to start against Manchester United.

Meanwhile, Manchester United have a couple of injury concerns. Edinson Cavani has been out for a couple of weeks because of a groin injury. They also left Scott McTominay out of the squad against Watford due to illness. The Red Devils will hope the latter will return to face the Sky Blues.

Ralf Rangnick has lost just once in his Man United tenure, and a result against City will propel their chances of finishing in the top 4. He will look at Cristiano Ronaldo and Bruno Fernandes to take their chances.

Manchester City came away with 3 points against Everton, but they had to work hard to achieve the result. Their first-half performance was far from convincing, and they will look to start strong against United. Pep Guardiola once again started Bernardo Silva in the false 9 position. They struggled to win the ball back quickly, as Everton had a couple of good chances to go ahead. They improved in the second half and scored a goal via an Everton defender’s error.

Last time out in the derby, City outplayed United and won 2-0. The Red Devils only had one shot on target, as Pep Guardiola’s men restricted them at Old Trafford. They will look to repeat the performance in November, and collect 3 crucial points in what seems to be a tight race for the Premier League trophy.

Manchester United are scrapping out draws recently. Rangnick’s side have improved since their defeat to Wolves, as they are creating good goal scoring opportunities. The defence has also tightened, with Harry Maguire leading from the front. They have kept two clean sheets in their last three Premier League games.

Luke Shaw and Bruno Fernandes scored against Manchester City at the Etihad last season. They stopped City’s 21 game-winning run and will look to do the same this year. Ole Gunnar Solskjaer used the pace of Martial and Rashford on the counter, with a compact defensive structure. Ralf Rangnick will take inputs from that performance and will try to implement it on Sunday.

Raheem Sterling has been City’s talisman during their winning run. He has already scored 10 Premier League goals and remains the Citizens’ top scorer in the league. However, he has had a long goal drought against Manchester United and will hope the drought ends.

His ability to make runs in behind into the penalty area will be crucial for City. United will look to play a compact defensive block and Sterling’s movement will be an important factor, as City will look to break the block. With the likes of Kevin De Bruyne and Phil Foden supplying, the Englishman will look to cause an impact against the Red Devils.

Like Raheem Sterling, Bruno Fernandes has been United’s main man in the last two months. Everything has gone through the Portuguese and he has created a bundle of chances. He has scored 49 goals in the United colors in just over 100 matches.

Fernandes also scored a penalty in the first minute at the Etihad Stadium last time out. The goal was important as it made City uncomfortable. He was the chief architect and linked up play between Martial and Rashford on the break. However, in the recent games he has been poor in front of the goal, but will hope to score in the Derby.

Jesse Marsch takes over in March: Who is Leeds United new manager & can he help them survive the drop?
Burnley vs Chelsea: Match Preview | Premier League 2021/22
To Top