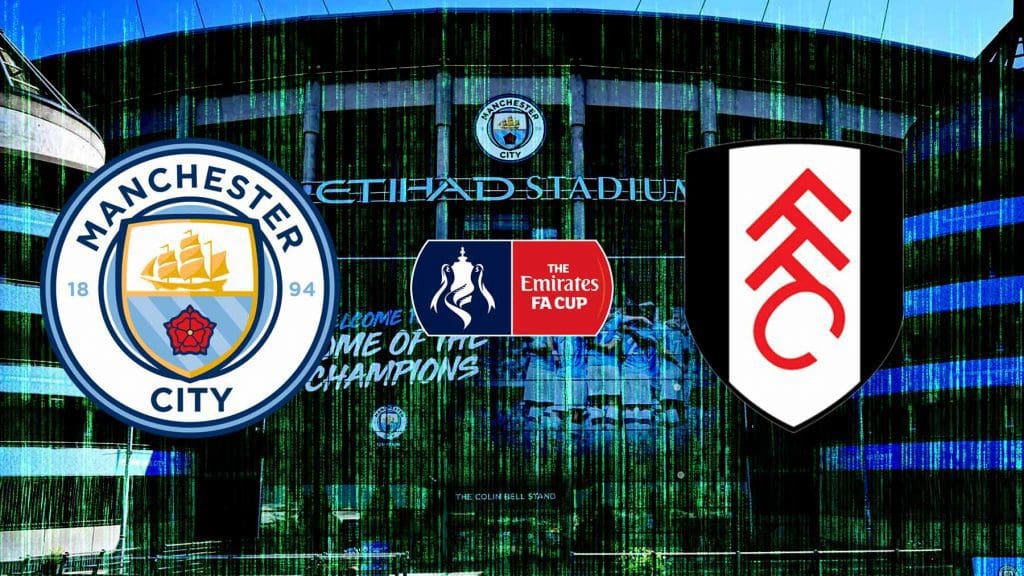 After a week of hiatus from football, Manchester City returns to action with their match against Fulham in England’s historical FA Cup. Pep Guardiola’s side saw their run of 12 consecutive wins end in a disappointing draw against Southampton. Despite the draw, City were able to score which kept their unbeaten run. Meanwhile, the leaders of Championship Fulham also share a similar story as their winning run ended with a draw last time out.

The FA Cup famous for giant-killing stories have brought us a perfect David vs Goliath fixture as the leaders of their respective divisions lock horns against each other.

Pep Guardiola has less worries about injuries as he has almost the whole squad fit for their outing against Fulham. Riyadh Mahrez has just arrived from AFCON duties and hence, has been granted a week off. This will mark him absent for tomorrow’s game. While Ederson and Jesus will also be provided with some rest due to their national duties. The Brazilian attacker might be a worrying absentee for City fans but the absence of Ederson’s absence will still be normal as this is Steffen’s time to shine.

Pep needs Cancelo for crucial games, so there’s a chance that Kyle Walker will play the full 90 minutes along with Zinchenko as fullbacks. We should also keep tabs on Cole Palmer (who missed the training session due to discomfort) and McAtee (who could earn a start) for this fixture.

Marco Silva has transformed Fulham this season and made them an attacking menace. Fulham lead the scoring chart in Championship this season. His crucial playmaking pillar Antonee Robinson could miss this match as he just returned from international duty and might not be ready to start. Except for Robinson, Silva has no other worries against Man City.

Both teams are possibly going to taste silverware in their respective divisions, but in Cup competition, the odds are stacked against Fulham. Pep Guardiola showed respect to Swindon Town in the last round and fielded a PL level lineup against them. We expect Guardiola to do the same thing against Fulham as well.

With the quality of players Guardiola has, Guardiola will expect his wide forwards to take the game into their own hands and make important runs behind the opposition’s defence. With Cancelo possibly sitting out, we could see Zinchenko make a lot of overlapping runs on the left flank.

Fulham’s attacking threat will be from their attacking mid Carvalho and striker Mitrovic; we could see Rodri having a busy day in attempts to handle Fulham’s duo.

Fulham have been successful in scoring in the majority of the games and Marco Silva will expect Mitrovic to find the back of the net at least once. Carvalho and Wilson if provided freedom by the opposition even for a short period of time could prove to be dangerous weapons for Fulham as the duo’s ability to control the play and make special looking passes are second to none in the championship. Fulham may look to win freekicks in important places as the towering presence of Adarabiyo and Mitrovic could come in handy.

Phil Foden’s rise in City ranks has been a splendid one since last season. Englishman has carried his consistency in this season too and he really justified all the hype surrounding around him. With Riyad Mahrez and Gabriel Jesus possibly out of this fixture and Cancelo probably rested; it will come down to Foden’s shoulders to provide the extra creativity to get his team to the next round. It is safe to assume that Guardiola will start him on the left of the front three but eventually he will jump his position from left to center. He has followed a specific pattern of play and it has gelled well with Sterling’s return to form. Fulham will play with a high line and Foden has the ability to make runs from the blindside and he can be a great option for midfielders for a through ball pass or quick one-twos with Zinchenko. With Manchester City possibly attacking more from the left side, it’ll be Foden and Grealish’s understanding of each other’s movements that’ll decide the outcome of the game.

Talking about highly-rated youngsters, Fulham’s Fabio Carvalho is one of the hottest prospects in the UK. With Liverpool waiting for him in the summer, Fabio Carvalho has been the heart of Fulham’s creativity. His maturity and positional awareness as a no. 10 has helped Mitrovic bang plenty of goals this season. His technique and passing abilities are some of the best (if not the best) in the Championship. He has a chance to impress his future destination by eliminating their title rivals out of the F.A. Cup. It will be his intelligence off the ball that will decide the positions he will be getting the opportunity to create chances. He will be heavily marked by Manchester City midfielders and will need to play against their press. This game will give him an idea of football at the highest level and possibly make him understand the quality of PL.

Will we see Stina Blackstenius and Vivianne Miedema start together at Arsenal?
Liverpool vs Cardiff City: Match Preview | FA Cup 2021/22
To Top