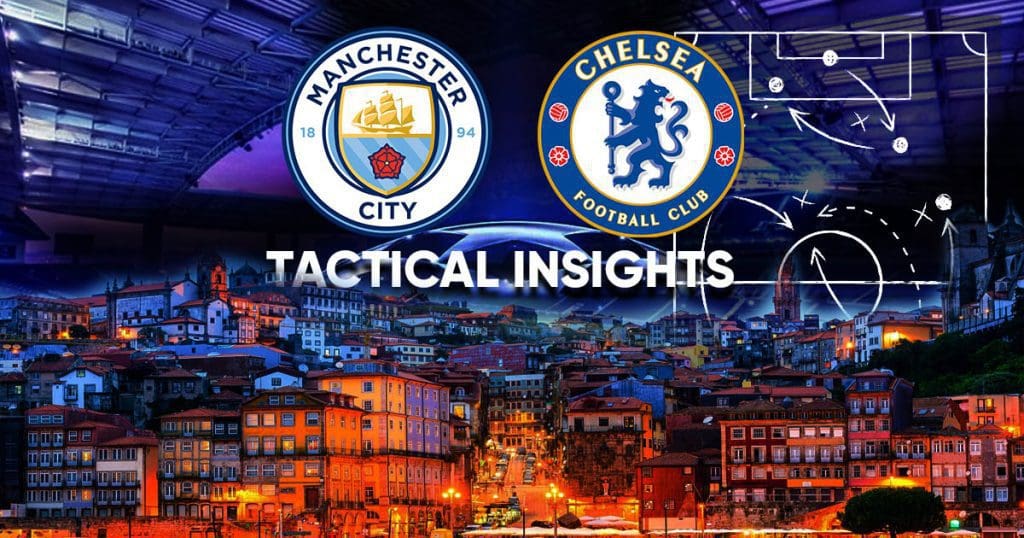 At the start of the 2020/21 season, nobody would have expected that Manchester City and Chelsea will face each other in the UEFA Champions League final, however, here we are.

Thomas Tuchel was appointed head coach at Chelsea only three months ago, and the players have taken to the German like they were always destined to play under him. Small footballs in training; having tennis balls while defending to avoid grappling opponents; extra touches with knees- Thomas Tuchel has employed unique training methods but they have provided with him rich dividends.

The only other manager who is known to have such unique training methods is Tuchel’s idol and counterpart on Saturday, Pep Guardiola. Guardiola’s understanding of the game took a while before it was completely consumed by City’s players, courtesy of which they have won every major trophy in England and will now play for the biggest prize European football has to offer.

However, with both managers being so tactically astute, many pundits have predicted the final to be a game of chess. So let us look at how both clubs can dissect their opposition in the final.

Before April, Thomas Tuchel had never defeated Pep Guardiola in a competitive fixture, but then went on to win twice in a matter of three weeks, once in the FA Cup and once in the Premier League. So what can Guardiola do to avoid giving Tuchel his third consecutive win?

Firstly what did Manchester City do wrong in both games?

It is important to understand that in both games, City set up as a 4-3-3 while Chelsea set up as a 3-4-3. The tactics may differ, but the formations never changed for either side.

Pressing is an important feature for Manchester City as it has brought them a lot of success over the years. Moreover, it is tactful pressing. While the frontmen press the defenders, the midfielders cover the passing lanes, and this lets the back four maintain a steady offside line. However, you need to alter your tactics based on the team you are facing. Pressing works only when you go man for man, otherwise, it is a futile attempt at winning the ball back.

City repeatedly pressed Chelsea’s back five with four players, which would leave one central defender with all the freedom in the world. The problem with this is Chelsea’s central midfielders also fall back and stay near the center-backs to form a triangle. For example – N’Golo Kante drops back and forms a triangle with Thiago Silva and Reece James. Similarly, Jorginho falls back to form a triangle with Thiago Silva and Antonio Rudiger. This always enabled Chelsea to outnumber Manchester City in the press.

Triangular passing is the blueprint of Tuchel’s ideology, as are layoffs and two-touch passing. The triangles do not end with the center-backs as Chelsea always tries to form a triangle on all areas of the pitch. Every single time, two City players would press the ball and lose out. Chelsea’s only goal in the FA Cup semi-final came because of a triangle between Jorginho, Ben Chilwell, and Mason Mount, who eventually played the through ball to Werner who then squared the ball to Hakim Ziyech to give Chelsea the lead and a place in the FA Cup final- all of which was played through quick two-touch passing.

So, what can Man City do to avoid this and break up Chelsea’s play?

Gaining possession and breaking up Chelsea’s play is not going to be easy, but the solution is not all that hard either. Assuming City’s back four keep Chelsea’s forwards in a touching distance, Chelsea’s way out is playing the ball out from the back. Thus, when City press, they should not press Thiago Silva, who is the central defender. Every bit of Chelsea’s attack is formed through passing triangles between their wing-backs and wingers or between the midfielders and the central striker, who lays off the ball to either winger.

Covering both Rudiger and Reece James, i.e., the other two center-backs, limits Thiago Silva’s options of passing the ball out from the back. Further, Man City can use the spare man to mark N’Golo Kante and use the attacking midfielder i.e., Kevin De Bruyne, to press Jorginho. This now leaves Chelsea’s wing-backs open, but if City’s full-backs are within a pressing distance from that makes it a risky pass for Thiago Silva. So Silva’s only alternative will be to play the ball long to Werner, an area Dias and John Stones can dominate against the German.

This way, City can force Chelsea into errors, manage the game and capitalize on their mistakes. Guardiola is a mastermind, and he will need to employ sensible tactics should he want to lift the Champions League trophy again.

Although Thomas Tuchel has trumped Manchester City twice in the last month or so, he has not faced City’s best XI yet, and it could prove to be a major issue for him.

So, where could Chelsea lose the game to Manchester City?

It is easy to assess this, given that Chelsea have lost three of their last four games in all competitions. While tiredness could have been a factor, there is the way how Manchester City could not just defeat but annihilate Chelsea.

Like Chelsea, Manchester are an attractive outfit when they have possession of the ball. However, unlike Chelsea, they do not rely on triangular passing as much as passing between the lines. Most of Chelsea’s insecurities stem from quick passes between the opposition midfielders or outnumbering Chelsea’s midfield. Ilkay Gundogan and Kevin De Bruyne, who will form two-thirds of City’s midfield trident on Saturday, are excellent in ball progression. Due to City’s intricate passing between the lines, it is hard to keep track of which player is moving which way.

Chelsea have been brilliant in understanding how a team play, but when a team like City interchange passes between themselves as fast as they do, it becomes a problem. Pressing De Bruyne and Gundogan will lead to City’s wingers being 1v1 against Chelsea’s defenders. Tuchel likes to maintain a close distance between his midfielders and his defence but, due to City’s innate quality in midfield, Chelsea are doomed either way. Something similar happened against Leicester City in the quarter-final when Chelsea let Tielemans run through the center of the pitch as they were hesitant to press him. Needless to say, Tielemans scored a screamer in the FA Cup final and went on to lift the trophy at Chelsea’s expense.

The alternate option would be to play a high line, but the thought of letting Mahrez and Foden latch on to through balls over the shoulder of Chelsea’s defenders is not all that attractive to Tuchel.

Thus, what can Thomas Tuchel do to outsmart Pep Guardiola?

Let us get one thing out of the way. There is nothing Chelsea can do to stop City’s quick interchange between the midfield and the frontline. Their quality is supreme, and they have developed an understanding between themselves over the last couple of years.

However, what Tuchel can do is cut the source. Man City, unlike Chelsea, likes to stretch the game vertically rather than horizontally. The midfielders and front-men are not all that close together, however, the midfield and defence are particularly close. Chelsea needs to press Manchester City’s defenders while they also need to cover up the passing lanes. For example- When City have possession of the ball, they revert to a back three as Walker tucks in alongside John Stones and Ruben Dias, which lets Joao Cancelo play like a wing-back on the left side. Chelsea will need to be within pressing distance of City’s back three while N’Golo Kante will need to cover the space between Rodri and Ilkay Gundogan, while Jorginho will need to cover up the space between Rodri and De Bruyne.

This restricts City from playing the ball out to any of the players in defence, leaving Ederson to find De Bruyne or Gundogan in empty spaces. However, if Ederson misplaces that ball, Chelsea could counter City through the center of the pitch. Chelsea did something in the second leg against Real Madrid and performed their roles brilliantly. This lets the wing-backs i.e Ben Chilwell and Reece James to cover the space between City’s winger and the attacking midfielder on their respective sides.

Compressing Man City into a bubble restricts them from receiving the ball in dangerous areas. However, this takes a lot of practice and focus. But given that Mason Mount, Jorginho, and Kante are excellent pressers of the ball, Chelsea are one of the very few teams in world football who can carry out this job efficiently.

This will allow Chelsea to play the way they normally do and could also help them secure an early goal. Apart from that, Chelsea have managed most games effectively this season, and it would not come as a surprise to anybody, let alone Blues fans if, Chelsea win the game 1-0.

A lot to play, a lot to think about for Thomas Tuchel and Pep Guardiola. The final is less than 48 hours away, and both managers need to put their thinking caps on. Fortune will favour the brave, and both clubs will be building up nerves of steel on Saturday as they try to outsmart the other and win Europe’s premier competition – the UEFA Champions League.

Mattie Pollock: The 19-year-old who recently signed for Watford in a dream move for the youngster
Gini Wijnaldum to Barcelona: Where will Koeman use him
To Top