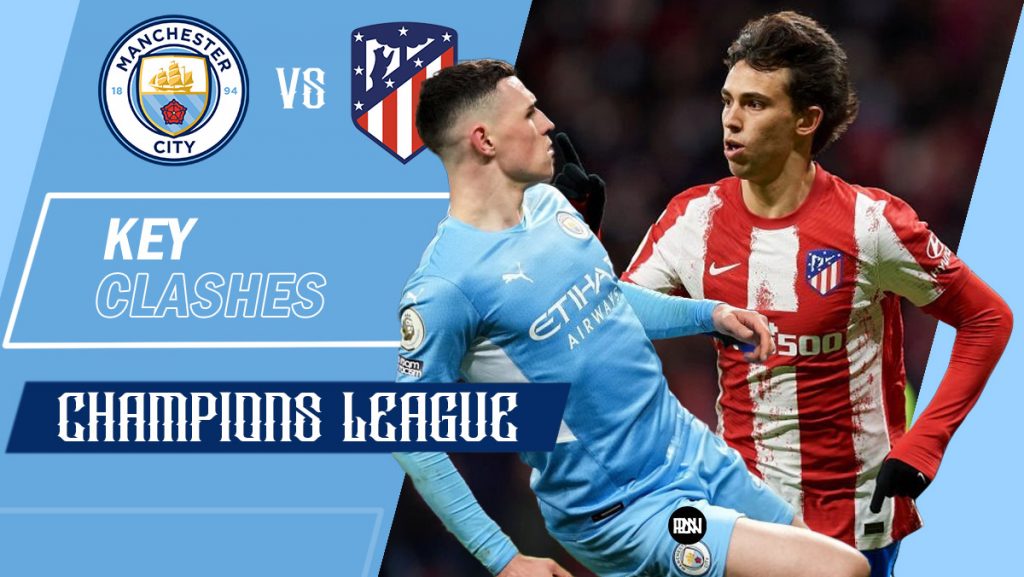 European football is back this week with some mouth watering duels this matchweek. Starting from April 6 (IST), football fans all across the world will keep their eyes on the clash of the Titans, as Pep’s Manchester City will face Simeone’s Atletico Madrid at the Etihad in the first leg of the quarter finals of the UEFA Champions League.

The “Noisy neighbors” are leading the Premier League points table currently with a point lead over Liverpool. With Man City facing Liverpool on April 10, a match which is being hailed as the title showdown, Cityzens will surely look forward to gain the confidence by putting up an impressive performance against last year’s La Liga champions. When Man City traveled to the Estadio Jose Alvalade for the first leg of their last-16 encounter with Sporting, supporters certainly got their money’s worth, as Bernardo Silva (2), Riyad Mahrez, Phil Foden, and Raheem Sterling were all on the scoresheet.

Pep Guardiola has taken City to the zenith of their football history by being a serial winner but European Glory is still something that is missing from Manchester City’s cabinet. Having won the Champions League with FC Barcelona, the Spanish headmaster will have a comfortable lead in the debate of the greatest manager of all time if he has his hands laid on the Champions League trophy this year. The restless Etihad faithful will be hoping that the last-eight curse does not strike again this time, but their team has gone seven games without losing in all competitions and had won nine games in a row at home in the Champions League before taking it easy against Sporting.

The Spanish outfit, last season’s La Liga winners are currently struggling as they are 12 points behind the table toppers. But Diego Simeone is a different breed when it comes to the Champions League. Atletico Madrid had their fans’ hearts broken twice in 2014 and 2016 when they only managed to stand second on the podium. Atletico Madrid brushed aside the other Manchester side in the pre quarters and will look to complete their Manchester haul. The less said about Atletico’s fruitless La Liga championship defence, the better, but the reigning Spanish champions have struck gold at the right time, with a 4-1 league victory over Alaves on Saturday night marking their sixth win in a row in all competitions. Man City are heavy favorites to advance from the quarterfinals to the semifinals of the UEFA Champions League.

Needless to say in a clash like this, it is inevitable to have a few individual duels on the pitch. Here are some of the key clashes of the tie:

The player of the tournament when England won the 2017 Indian World Cup in India, Phil Foden’s climb to the heady heights of the game has been expected for some time, and the Manchester City attacker enjoyed a fantastic season for club and country. Foden’s versatility has thus been a key factor in his improved form, with the England international posing a constant goal threat whether playing on the left or right wing, as an attacking midfielder, or even as a false nine. While his skills and vision have long positioned him as David Silva’s natural successor at the Etihad, Foden prefers to play in the penalty area and has developed a happy knack for scoring crucial goals.

Atletico had splurged 126 million euros in 2019 to acquire the services of Joao Félix from Benfica. Since then the Internet is divided into two, with some believing that Felix has not justified his price tag while the other half saying the opposite. Felix, 22, seemed to have turned a corner in recent weeks. And he took Atletico with him from a season that rapidly descended into dissatisfaction and difficulty after the euphoric highs of their title triumph. Felix’s performance against Manchester United in the Champions League in February was one of his best in an Atletico Madrid shirt. With 7 goals in his last 8 matches including a brace in his last, Felix is a potential threat to City’s defence.

Koke isn’t only a member of the squad; he’s also one of manager Diego Simeone’s most recognisable on-field figures. Simeone’s team needs tenacity and aggression, as well as technique and attacking vision, and Koke is the obvious emphasis when he’s on top of his game because he has such an impact on the team’s flow. In any midfield role he’s asked to play, he’s trusted fully by his manager, and he’s proven to be one of the team’s leaders through regular performances. This season, Koke has established himself as a key figure for Atlético in terms of achieving the required balance between defence and attack. He is frequently with the ball in the transitional stages between defence and offence, deciding which side to assault with a positional attack.

Any team that has KDB in it, is a threat itself. Often described as the complete footballer, the skipper orchestrates the midfield. An excellent passer of the ball, KDB has great vision that helps him to thoroughly scan the field setting to lay pinpoint long and diagonal passes to feed his teammates. The Belgian international has a better understanding of how to sway fate in his favor. Kevin De Bruyne has been on fire recently, scoring four goals in his previous four appearances, and with Atleti’s deep-lying defensive scheme, the Belgian should be able to take plenty of pot shots.

A defensive midfielder must be adept at both attacking and defending the ball. Rodri appears to be an expert in his field already. He understands when to take up attacking space, where to position himself to disturb the opponent’s rhythm, and so on. He even knows when to commit a tactical foul to stop opponents from counter-attacking, which Fernandinho did a lot during his time at City. The Spaniard’s influence is perhaps best demonstrated by a magical moment he created at Anfield earlier this season. In the final minutes of the game, with the tie deadlocked at 2-2, he delivered probably the season’s best block to deny Fabinho a clear-cut scoring chance. In the absence of Ruben Dias in City’s defense, Rodri’s splendid defensive positional awareness will be an integral part in keeping Atleti attackers at bay.

De Paul’s per-90 numbers, which include penalty area passes, goal-creating actions, and expected assist (xA), outperform 99 percent of midfielders in Europe’s top five leagues. Rodrigo De Paul is a person who possesses a distinct collection of skills. He isn’t particularly speedy, but he can keep the ball and pull players to him. De Paul’s ingenuity in right centre midfield could work well in a system that has always been defensively conservative. It’s worth mentioning, though, that he’d be better suited to a 4-4-2 than Simeone’s previous 3-5-2 formation. De Paul’s ability to be a deep-lying creative will be obvious to anybody who followed Argentina during their Copa America-winning campaign. With a long ball from deep in midfield, he set up Angel Di Maria’s winning goal. In the next days in the Spanish capital, he is likely to make similar passes.

Football is played on the field and not on paper. Pep is infamous for keeping a few of his first team players on the bench, it won’t raise a few eyebrows if he benches any of these players. Manchester City has a plethora of creative options in Bernardo Silva, the Portuguese who is perhaps having the best days of his career, an excellent carrier of the ball, Silva has been excellent as the number 8 for Pep this season. Gundagon’s presence has always gone under the radar. The German international is the key in transitioning the play from his City’s own box to the opposition’s. With attackers like Mahrez and Grealish and Sterling  City’s upfront will surely test Atleti’s gritty defense ably supported by Cancelo from the flanks.

Absence of Ruben Dias is surely a major boost to Cholo’s side that boasts Suarez, Griezmann, Felix and Angel Correa. Matheus Cunha had some game time against Alaves, a match where he also won a penalty. The wiry 22-year-old plays with a direct, disruptive style, which is ideal for charging at Man City’s back line and causing havoc in transition. Renan Lodi, Ateltico’s unexpected hero in the pre quarters, assisted Felix in the first tie followed by the tie winning goal in the 2nd leg. It’s gonna be exciting to witness the battle between Lodi and Cancelo, who is expected to start on the right side of the defense owing to Kyle Walker’s suspension.

According to FiveThirtyEight’s oddsmakers, with the English champions having an 82 percent chance of doing so. Diego Simeone, on the other hand, is completely unconcerned. He’s undoubtedly ecstatic to have an 11% probability of winning the first leg at Manchester City Stadium. And, with the Rojiblancos in their best form of the season — six straight wins in LaLiga and four clean sheets in the last eight — El Cholo will be preaching confidence and calmness to his players as they take a trip to England on Monday.