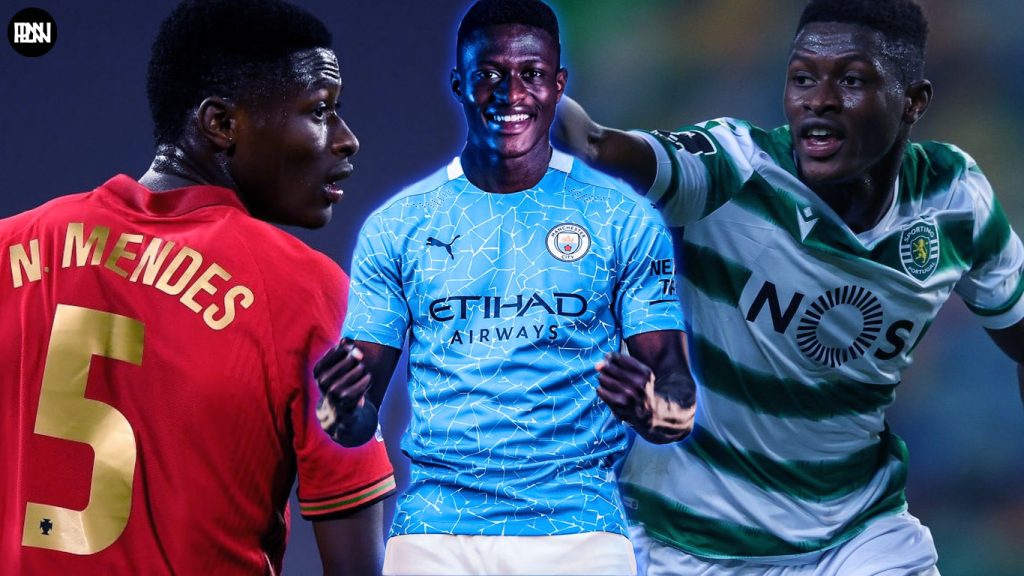 Since the dawn of this year, Manchester City are looking at alternatives in the market to end their pursuit of a long-term left-back. Manchester City manager Pep Guardiola signed Benjamin Mendy from AS Monaco in the summer of 2017. Due to Frenchman’s failure to stay fit for important games, Pep Guardiola has had to rely on makeshift left-backs like Fabian Delph, Oleksandr Zinchenko, and Joao Cancelo. Therefore, to put the left-back dilemma to an end, Pep Guardiola must find a solution as soon as possible.

Nuno Mendes from Sporting CP is a name that has made a mark on the wish list of City scouts. Mendes was recently seen in a Portugal jersey fulfilling his national duties at Euro 2020. His links with City have only grown since. Let us look at the factors that could make this deal unlikely from happening this summer.

Nuno Mendes for sure has a bright future ahead of him. Pacey skillful left-back in just nineteen and he has many years to shine ahead of him.

Sporting Lisbon is adamant that any club that wishes to have Mendes’ services must pay over at least €65 million, which could see him be a record sale in the history of Sporting CP. Manchester City haven’t spend huge on an unproven player ever. City have spent on players like Kevin De Bruyne and Ruben Dias because they were putting out numbers week in and week out. Nuno Mendes has been involved in just 2 goals in Liga Nos. This by any means doesn’t mean that young Portuguese is underperforming, he is a good player for the future but certainly not ready for top-level Premier League as of now, especially not for €65 million at the tender age of just 19.

Benjamin Mendy is the only specialist left-back at Manchester City currently. To bring in a player priced €65 million, City will need to sell one of the options at left that they currently have. Pep Guardiola clearly prefers Zinchenko over Mendy so it is obvious that the Frenchman should have to make way for a new signing.

Mendy has no suitors currently and offloading him is a big task for the City director. He has been very unlucky with the injuries. Benjamin was out for almost a couple of seasons due to two different knee injuries. Even after being available last season, Mendy seems to have lost the touch he once had at Monaco. Former Le Harve graduate appeared just 13 times this term in Premier League. Pep Guardiola can’t overload his squad by left-backs and thus he will need to get rid of Mendy to make room for a fresh player. It is a challenging task for City directors.

As per the reports from Football London, City have targeted Harry Kane, who could cost them around £150 million. Their other target for this window is Aston Villa captain Jack Grealish. Aston Villa are set to open new contract talks with Grealish which could see his price rise. The Athletic reported that Grealish has agreed personal terms with City and this move could see him join Etihad outfit for £88 million. If City are to get both, they will have to spend over £200 million in a single window. This would make it difficult to allocate funds for the transfer of Nuno Mendes for such a hefty fee.

Nuno Mendes is a great player with a bright future, but he should give himself at least a season more at the Liga Nos to make himself ready for the big move to a club like Manchester City.