Manchester City will welcome Real Madrid to the Etihad Stadium on Friday for the second leg of their UEFA Champions League last-16 tie.

The Citizens beat Los Blancos 2-1 at the Santiago Bernabeu back in February with Sergio Ramos ending up going off on a red carpet.

We take a look at how Pep Guardiola is likely to line his team up for the return league in England. (Formation 4-3-3)

The Brazil international is the club’s first-choice keeper and is expected to start in goal for the Premier League side on Friday, having kept two clean sheets in the competition.

Kyle Walker will be preferred over Joao Cancelo for his vast experience he has in such big games. The Englishman has enjoyed a good season and the game against Madrid will be a good fight once again for him.

Fernandinho and Aymeric Laporte will also be expected to start at the heart of defence for Guardiola’s men. The pair have played together for the most part of this season due to little options at the back for the manager, who has converted Fernandinho into a centre-back.

Benjamin Mendy has been able to maintain his fitness for majority of the 2019/20 campaign and is likely to be restored into the left-back position for the crucial game.

Kevin de Bruyne is the ideal starter for Guardiola with his incredible form this season. In the Champions League, the 29-year-old has scored one while also providing two assists in five games. He also ended the domestic season in spectacular form scoring two goals and laying on one assist against Norwich City.

The man to play next to the Belgian is likely to be Rodrigo. The Spanish international has not had the best of seasons but has provided the needed cover in the team at some point when called upon.

A departing David Silva will hope to add a bit of spark to City’s midfield on Friday as he tries in a bid to secure an European medal with the club. He has only managed two appearances in the competition this season.

A whole lot of options to choose for the right-wing position but Riyad Mahrez is expected to get the nod ahead of Bernardo Silva. The Algeria international has started six games in this season’s edition and has already contributed to five goals.

With Sergio Aguero unlikely to be fit for the game, Gabriel Jesus is the obvious choice for the No.9 role. The Brazil international scored at the Bernabeu as City won the first league and will be keen to add to his goals this season.

Raheem Sterling ended the Premier League season, scoring seven goals in his last five games as City finished second. Sterling also has five goals and two assists in his seven appearances in the Champions League. He came off the bench to win a penalty in the first-leg which was converted by De Bruyne to give City the win. 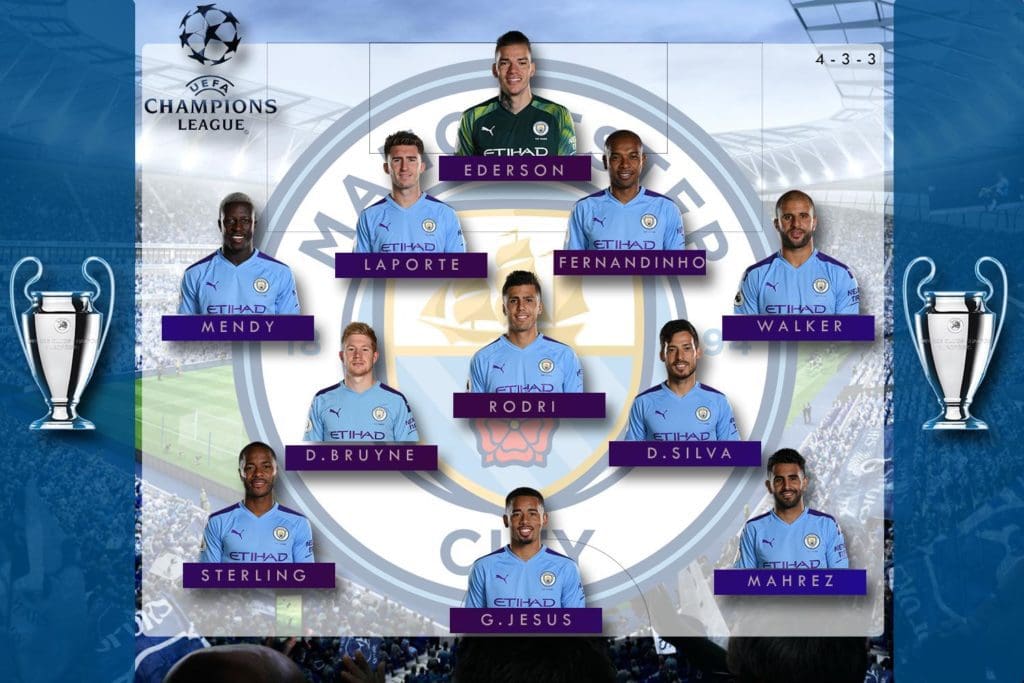