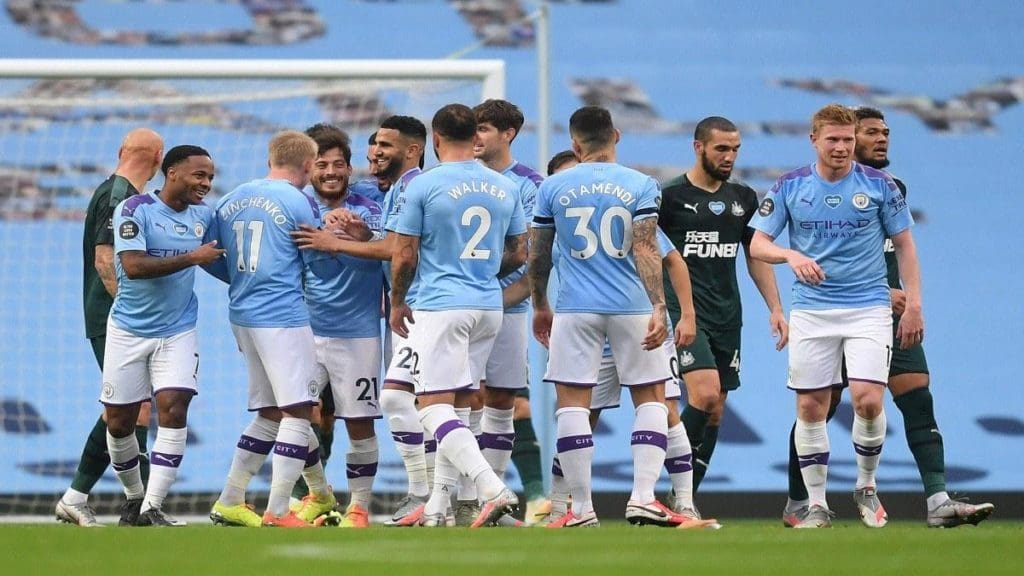 Manchester City became the first club in the history of the Premier League to have five different players score at least 10 goals in a single campaign on Wednesday.

Kevin de Bruyne’s assist for Riyad Mahrez to tap home to make it 2-0 at the Etihad Stadium saw the latter move to double figures for the 2019/20 season.

He joined the list of Sergio Aguero, Raheem Sterling, Gabriel Jesus and De Bruyne who have all scored at least 10 goals in the league this term.

The Argentina international leads the way with 16, followed by Sterling with 13, with Jesus and the Belgian both on 11 before Mahrez on 10.

In the English top-flight, Everton in 1984/85 season were the last to see five players hit the 10-goal mark, which has now been achieved by the Citizens.

Goals from the Morocco international and the Brazilian took City’s goal tally to 83 in the league this season, nine more than Premier League champions Liverpool prior to their game against Brighton & Hove Albion.

Man City are the first side in #PL history to have 5️⃣ players score 10+ goals in a season#MCINEW pic.twitter.com/kIAyyTjmDM

However, City find themselves 23 points behind Liverpool having lost 1-0 to Southampton over the weekend, despite their goalscoring feat.

An own goal, and a perfect David Silva free-kick before Sterling added an off the bench ensured Pep Guardiola’s side put five past the Magpies.

Silva’s assists for City’s No.7 and Jesus for their strikes saw the Spaniard enter double figures for the campaign, thus he has recorded at least 10 assists in each of his last 10 seasons with the Manchester club and 121 across all competitions.