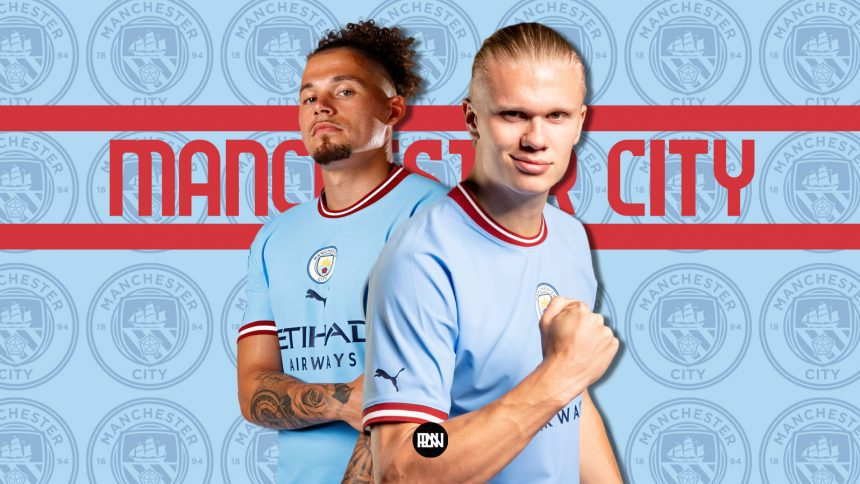 We have seen how Liverpool’s new signings could fit into the squad going into the new season. And now, let us look at the new summer signings of their rivals in Manchester City and the key players who can make a difference at the Etihad in the forthcoming season. We will be analysing each aspect of the game and how Man City players can really put in the value to each of the new sides they have signed for.

To begin with, the Skyblues’ have four new faces this summer – Julien Alvarez will link up with City after signing in January, Erling Haaland, Stefan Ortega, and Kalvin Phillips, and have been linked with at least another player in Marc Cucurella. They have also had outgoing players majorly in the form of Gabriel Jesus, Fernandinho, Raheem Sterling, and Oleksandr Zinchenko.

Here, in this article, we will be looking at Haaland and Kalvin Phillips. We will also discuss why we should keep an eye on these newbies as the new season is about to commence.

Erling Haaland, the Norwegian Machine, is the beast who has taken world football by storm in just about 3 years of being at the fore of things. It is not easy to even think of doing what he has done, in the modern era. Haaland and the French sensation, Kylian Mbappe, are considered to be the next-gen rivalry, following Ronaldo vs Messi. But, to be honest, it is still too much to ask for, from even players like Mbappe and Haaland to replicate what the GOATs of Football have done.

However, the rise of the Norwegian Viking was seen in 2019, when he moved to Austria to play for RB Salzburg. It was there that Haaland broke a major chunk of the records, and went on to build his own share of unachievable records. To list a few of them;

It is true that he is a striker, but at the same time, the littlest of things that he does on the pitch contributes to the fact that makes him a complete striker. And to be such a scary striker in the modern era of Football, is in itself a whole sense of achievement. Because the game is progressing, and modern-day wingers are getting more run-in than the actual centre-forwards.

But at the same time, a complete no.9 like Haaland has a high demand in the market just because of the goal-scoring threat he possesses. Strength, towering physique, pace, stamina, positional sense, and movement- the Norwegian is as good as it can get up front!

No matter who he plays for, it seems, one thing is for sure and that is goals galore… Haaland’s breakthrough came at Dortmund where he held the Bundesliga by its nerves, in the 2 seasons that he spent there before finally moving to England in Manchester. In the 88 games that he has played for Dortmund, the 22-year-old Norwegian striker has scored a galloping 85 goals and has provided another 22 assists. A G/A of more than 100 in just 88 games- it gets crazy the more we think about it!

Now if we talk about how Haaland can fit in the Manchester City system of play- well, it is looking a bit complicated. Just try and understand what I mean by that.

Comparing Haaland to someone like Lewandowski is fine because both are strikers and they both played in the Bundesliga. So, from the statistical point of view, they are rightly compared to each other. But from the analytical perspective, they cannot be compared. They are quite different!

Let me explain: In modern-day football, quite a few positional developments have occurred with a number of variations to go by. So, if we just look at the attackers (strikers in particular) there are quite a few as well – no.9, false 9, second to the CF (ss), and one or two more). Similarly, if we look at Haaland and Lewa, we will notice that each of them has their own way of going forward. And rightly so!

Lewa cannot share the same style as Haaland’s, because of the latter’s physical ability and pace prowess. So, the Polish forward has to find the pockets of space to catch the opposition napping- a similar kind of maneuver to what Aguero did. Another point to note is that Lewandowski was developed under Klopp- or under his guidance and in accordance with his style. The Polish International was in his developing phase back then, and hence even the little tips that were given to him at the time just stuck with him forever.

In short, Lewa is more of a floating striker, and Haaland is a driving striker. While both of them are complete no.9s, there is a lot to their game that makes them quite different from one another. And thus, this is the reason I think Haaland and Pep will find it difficult at the start to adjust. If you watched Aguero, the legendary striker of the PL and who has also worked under Pep, then you might remember that he possessed the same style as Lewandowski.

Floating strikers are conventional and novel at the same time. I might be right, or I might be wrong like completely wrong- but this is what I think based on the Analysis and the eye test, if Pep continues to play the 4-3-3 system with Haaland in the squad then City might not be able to use the Norwegian Viking’s abilities to the fullest. I know there is a perfectionist in KDB there at the Etihad, but it doesn’t work like that.

Haaland loves operating at the top, but all alone. He wants the freedom to go left, right and centre. So yeah, Guardiola will need to make the tactical changes, or else I think we might be seeing an average season from Haaland’s standards- around 20-25 goals- because I mean he still is a beast of a player and a good finisher.

But this is just a singular take, and in contrast to this, the Norwegian can also demolish the Premier League with the abilities he possesses. So the match on Saturday, against Liverpool in the Community Shield, might give us a good glimpse as to what type of Haaland season is on the way.

The 26-year-old English player is a tactically poised defensive midfielder who has experienced the know-hows of the English Premier League since getting promoted with Leeds United, back in the 2020/21 season. Phillips was one of the most precious picks for Marcelo Bielsa, in the starting XI. Mainly because of the English midfielder’s versatility and game sense to cover up for the voids in the midfield that was created by the forward runners.

Kalvin Phillips is kind of a player who is not directly involved too much with the goals but does bits in the midfield to create those final blows. For example, the Englishman has a knack for picking up key passes that can jumpstart a counter-attack, and at the same time, he has the awareness of reading the flow of the game- which in turn helps in defensive cover-ups and key interceptions.

A Fernandinho backup? I mean, it is fine to hope that he produces at the same level as the experienced Brazilian. But in all truth, it is too much to ask for from the 26-year-old. Although Phillips has the ability to operate as a driver, or even in a double pivot, the Fernandinho effect might take time to wear off and who knows what might happen then.

It is just an opinion, and they are subject to change in a way that Phillips can surely be the one who can form a partnership with Rodri if Pep decides to play a double pivot system from this season onwards. And this would help the whole team to bloom as well, given they would have Haaland as the target man up front- and looking at Phillips’ range of passing, he has got it in his locker to pick the Norwegian out even from his own half. Leaving the rest on Haaland’s long legs, and his abilities.

All-in-all, Kalvin Phillips could either prove to be a signing of great worth and promise, or it could turn out just as the same as how Grealish turned out to be. And in all fairness, a game like the upcoming Community Shield clash against Liverpool, could be a good run-in for the newbies. Given the managers can assess how to utilise the assets, and whom to work on more during the time that would remain after the game before the season really kicks off. 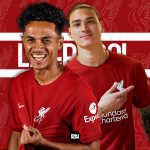 Bernd Leno to Fulham: What to expect
Leave a comment