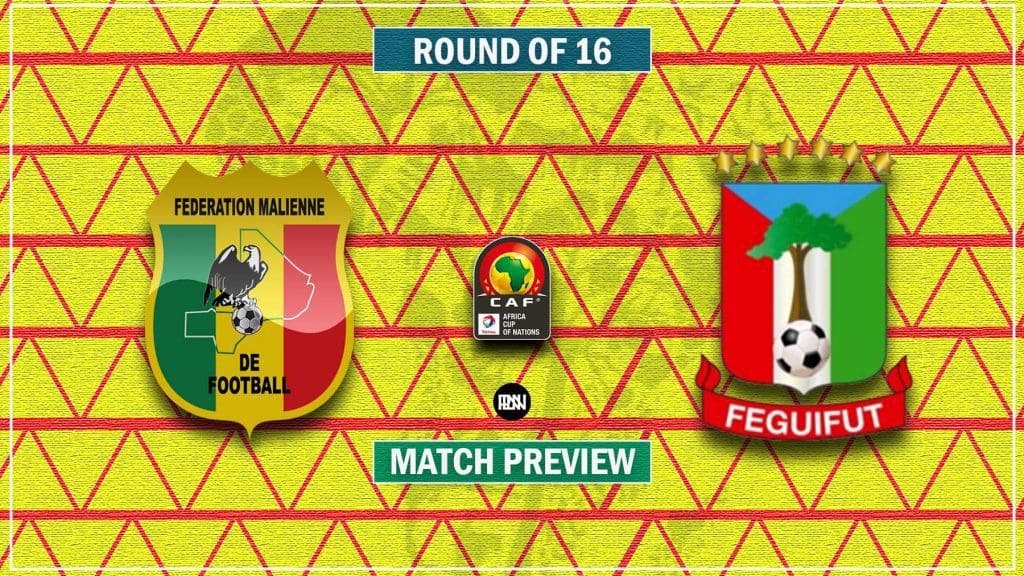 An entertaining knock out stage is what we have witnessed across the first few games that have been played with many heavyweights crushing out of this edition of the Africa Cup of Nations.

On Wednesday, Mali take on Equatorial Guinea. A battle for a spot in the last eight in the competition and the last round-of-16 fixtures of the 2021 Africa Cup of Nations.

Mali emerged as leaders of Group F and had very impressive performances after earning seven valuable points having come across Mauritania, Gambia and Tunisia.

Despite being drawn into Group E with African heavyweights Algeria and Ivory Coast, Equatorial Guinea managed to finished in second place in the group standings with two victories against Algeria and 10-men Sierra Leone.

There are no major injuries or suspensions for Mali. Consistent Kone will look to lead Mali to Victory in the attack.

Moussa Djenepo is back available for selection after missing the game against Mauritania through suspension for picking up a second consecutive yellow card in the game against the Gambia. He is expected to team up with Adama Traore and Brighton’s Yves Bissouma in midfield.

However, Equatorial Guinea’s 22-year-old Dorian Hanza is a doubt for this fixture after picking up an injury against Sierra Leone in the 75th minute in the last group game. Jesus Owono also maintains his spot in goal. The solid Malian backline is likely to remain unchanged.

A quarter-final spot against either Senegal or Cape Verde awaits the winner of this tie. Mali have managed more than 15 shots in every group game they played in the group stages and will look to continue to find the back of the net against Equatorial Guinea on Wednesday and threaten their goal as often as they can. The Malians will look to move one step closer in the quarter-final and conquer Africa for the first time in their history.

Mali have failed to win a knock out stage game since 2013 and will look to end this disappointing run of results in terms of knock out games. Relentless Ibrahim Kone scored in all group games for the Malians. He will look to extend his goal tally to four or more when Mali face Equatorial Guinea on Wednesday night. He is key alongside Moussa Djenepo and Adama Traore in the attack for Mali.

With Bissouma in midfield, Mali will look to find Djenepo and Adama Traore in the wide areas and the positioning of Ibrahim Kone will be absolutely vital to the triumph and involvement of Djenepo and Adama in the attack. Forcing the backline to keep a close eye on him and allowing wingers to run in behind the opposition’s defence. Mali have the quality to urge past Equatorial Guinea on Wednesday.

With seven points from three games and considering the fact that some heavyweights like Algeria and Nigeria have exited the competition, Mali do stand a chance and are a team to watch. They pursue a difficult yet achievable goal of becoming champions of the continent for the first time.

Equatorial Guinea look to cause a major upset and stun favourites Mali over this tie. They head into Wednesday’s game unbeaten in all but one of their last eight outings in all competitions, winning five and drawing twice. They will look to keep their fairytale run at the tournament alive and kicking.

The National Thunder are capable of causing a major upset. Pablo Ganet’s winner was enough to secure a place in the next round of the competition. Good progressors of the ball and their ability to create chances and spaces in attack will be taken highly into consideration by their opponents Mali.

They head into Wednesday’s game unbeaten in all but one of their last eight matches in all competitions, winning five and drawing twice and will look to keep their fairytale run at the tournament alive and kicking.

Brighton midfielder is one to keep a close eye on in this highly anticipated fixture. The Mali midfielder has been pursued by many elite English clubs including Arsenal and Liverpool over the past year and his presence in midfield will be absolutely vital for Mali when they face the Nzalang nacional on Wednesday.

Despite providing an assist only once in 14 appearances this season, Bissouma looks to revive his form in this year’s Africa Cup of Nations and his control in midfield has been obvious in the tournament.

The Southampton winger has not had the best beginning to the 2021/2022 premier league season after just 8 appearances and no goal involvement. Well known for his skill and pace Djenepo looks to make his mark in this tournament against The thunders on Wednesday night.

Julian Alvarez: Next Argentine to shine at Manchester City?
Mali vs Equatorial Guinea: 3 Key Clashes to look forward to | AFCON 2021
To Top