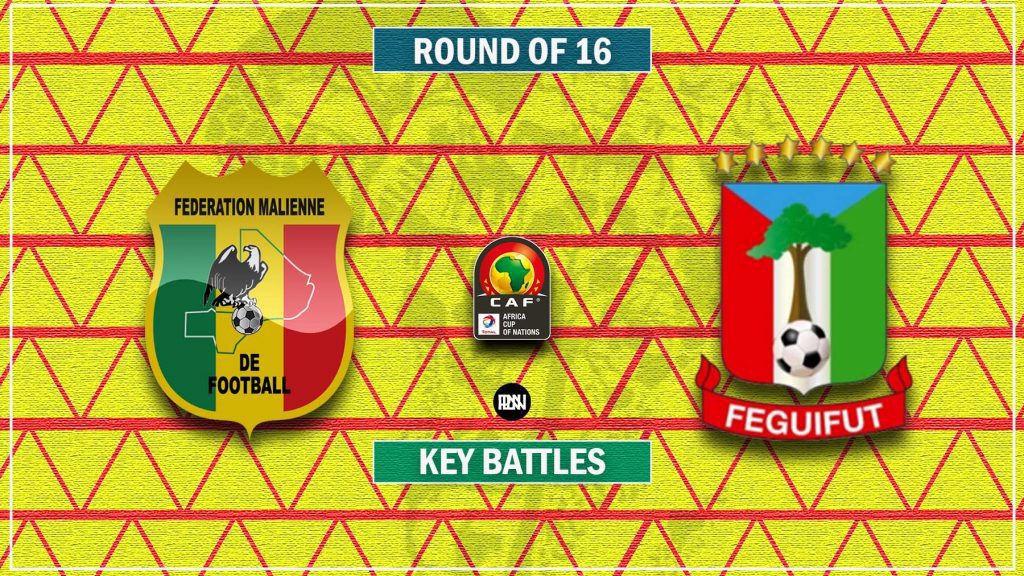 On Wednesday, Mali take on Equatorial Guinea. A battle for a spot in the last eight in the competition and the last round-of-16 fixtures of the 2021 Africa Cup of Nations.

Mali emerged as leaders of Group F and had very impressive performances after earning seven valuable points having come across Mauritania, Gambia and Tunisia.

Despite being drawn into group E with African heavyweights Algeria and Ivory Coast, Equatorial Guinea managed to finished in second place in the group standings with two victories against Algeria and 10 man Sierra Leone. Here are the key clashes to keep an eye on in this highly anticipated fixture.

Top scorer at this year’s Africa Cup of Nations for Mali, Ibrahima Kone looks to find the back of the net once again after his consistent run in the group stages.

After scoring five goals in five world cup qualifying games for Mali, Kone is cruising within the top scorer charts in this year’s Africa Cup of Nations and with a possible goal against Guinea Bissau, the Sarpsborg 08 forward will find himself within reach of the tournament top scorer Vincent Aboubakar. Pace, power, and efficiency in terms of positioning as a center forward. Coach Mohamed Magassouba seems to have full confidence in him and in this form he might grab a goal or two on Wednesday night.

However, Dorian Hanza is not on his best level in terms of finding the back of the net. although he leads the National Thunder attack, he has failed to find the back of the net in this tournament. To find himself constant as center forward means he has the trust of Coach Juan Micha and is considered reliable by the Equatorial Guinea camp. A goal against Mali could be the turnaround in this tournament for him on Wednesday night against Mali.

Malian midfielder Yves Bissouma is considered absolutely key by this Coach Mohamed Magassouba going into this fixture. A key man for Brighton in the premier league over the past few seasons and a promising midfielder, Bissouma is one to keep a close eye on in this fixture. He has the eye for that defensive splitting pass and reads the game magnificently. His strength is also a huge boost for Mali who would look to control the game from midfield on Wednesday when they take on Equatorial Guinea.

On the other hand, Pablo Ganet has been impressive for The thunders and has already found the back of the net in this tournament. His 38th-minute goal gave the thunders the much-needed points to guarantee qualification into the knock-out stages and to finish second in Group E. Strength and composure in midfield is the known trait that allows him to flourish. His presence is a boost for the west coast Africans as they face a huge task against Mali on Wednesday at the Limbe Stadium.

These two go head to head in this game as Crucial parts of their defenses respectively. Massadio Haidara’s goal against Mauritania was crucial in their 2-0 victory to earn the west Africans three vital points. Electrifying with pace when he dawns forward, Haidara’s presence on Wednesday can not be taken for granted. he will look to make overlapping runs on the left flank of the Malian attack and provide crosses into the box. A very hardworking left-back who features for Lens in the French Ligue 1.

Similarly, Esteban Fernandez Obono’s lone goal against Afcon champions Algeria gave Equatorial Guinea the victory and made an impressive surprise on the African giants who crushed out of the competition with just a point in Group E. A very solid center back on defense with immense aggression and ball retrieval efficiency. Equatorial Guinea will need him at his utmost best in the upcoming mouthwatering fixture.