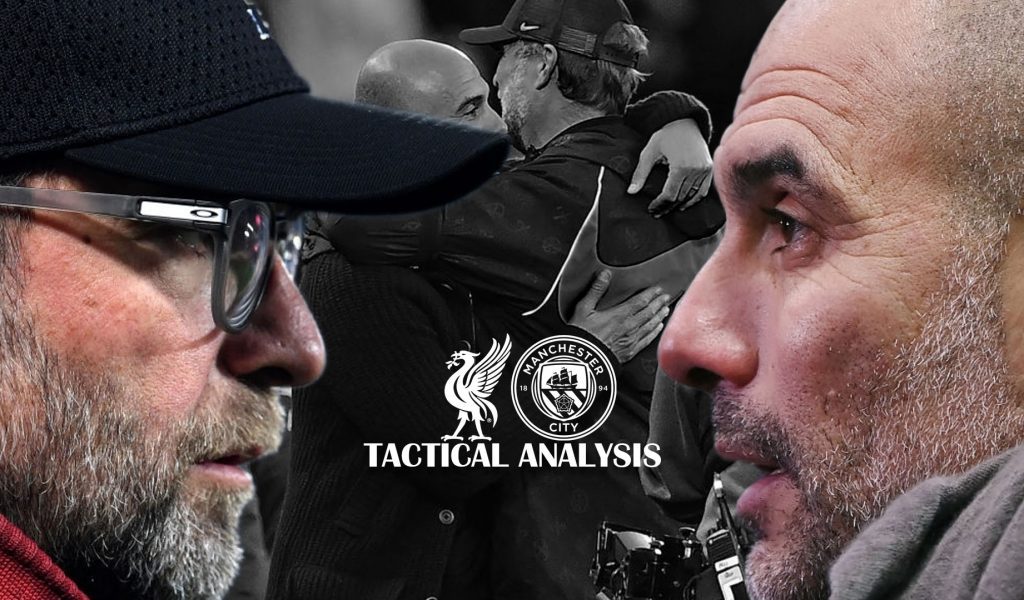 Breathtaking – the word to describe Sunday’s epic showdown at Anfield. Liverpool and Manchester City showed exactly why they have dominated English football in recent years. The game got more intense in the second half with four goals shared between the sides. Between Mohammad Salah’s solo stunner and Phil Foden’s pile-driving goals, a draw was a fair result. Let’s look at the tactical breakdown of both halves.

For Liverpool, James Milner replaced the injured Trent Alexander Arnold at right back. Pep Guardiola went with the same lineup he used against Chelsea, but Phil Foden started on the left wing with Grealish moving centrally as a false 9.

Liverpool started on the front foot in their usual 4-3-3 but their central midfielders (especially Henderson) were high up the pitch. Off the ball, they settled in the same shape but were much narrow to stop City progress through the middle. 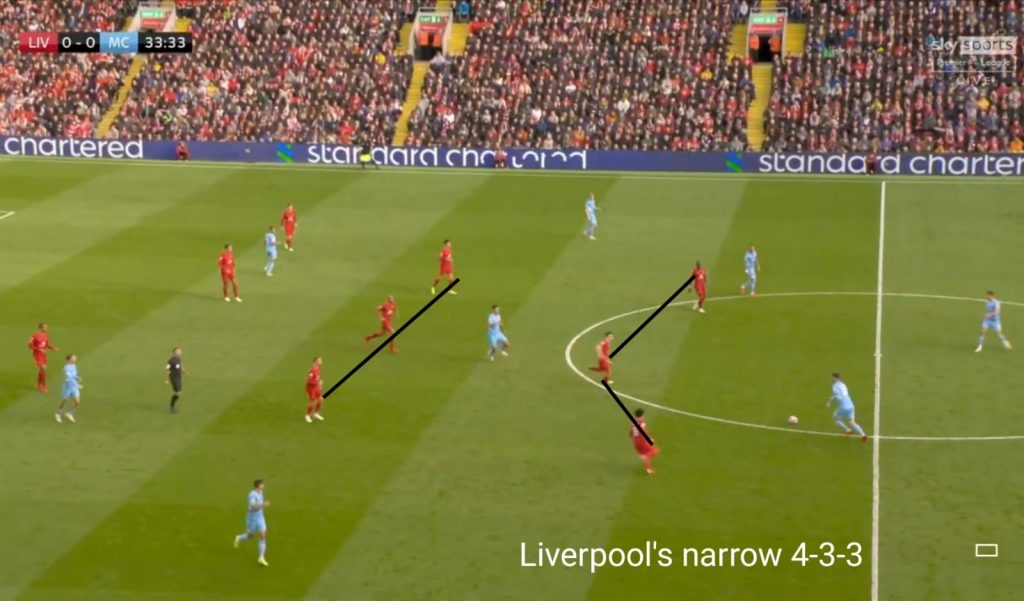 On the ball, Liverpool went direct and looked to pick out Sadio Mane on the left. He tried to bend his runs between Walker and Dias, but City were able to nullify him throughout the half. Liverpool’s central midfielders – especially Henderson were high up the pitch trying to create overloads in the wide areas. 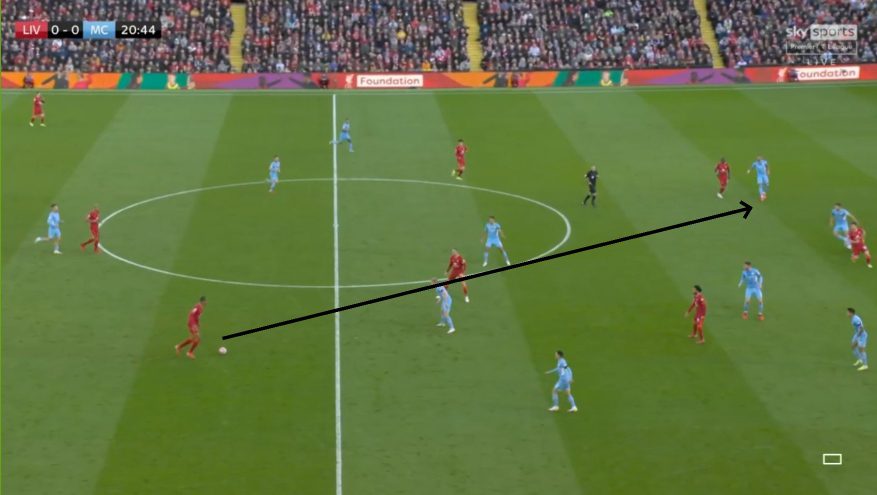 As for Manchester City, Kyle Walker was much more inverted forming a back 3 with Cancelo moving wide on the ball. They targeted James Milner throughout the match with Foden making runs in behind. This is shown by the fact that 44 per cent of Manchester City’s attacks were from their left side.

Bernardo Silva usually dropped deeper to provide an option for the centre backs. Henderson followed Silva whenever he dropped deeper. Liverpool’s narrow press meant that Cancelo was provided with a lot of space to pick out Foden or switch the play. 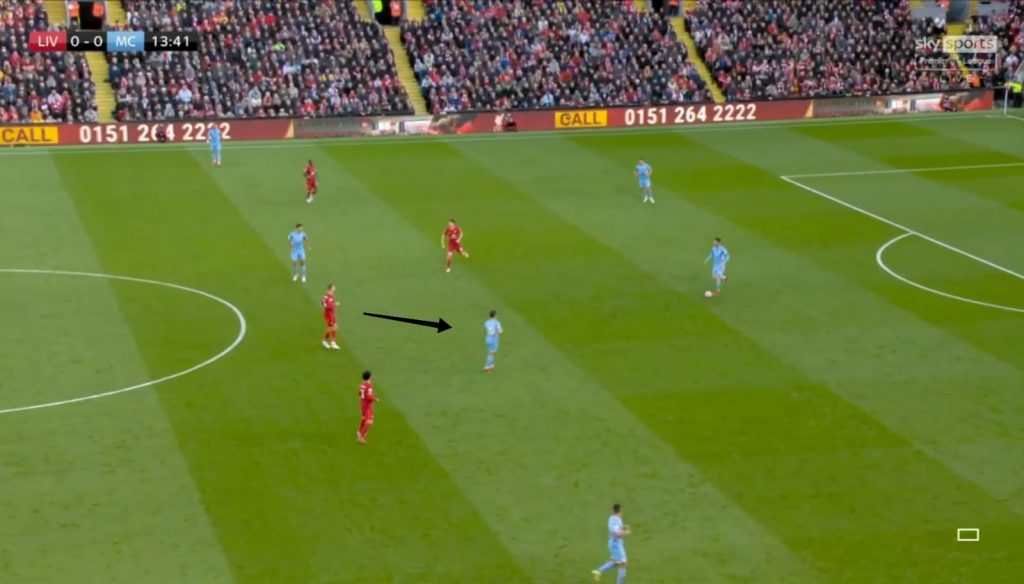 Off the ball, they settled in a 4-3-3 shape for the first 10-15 minutes. City looked to stop Fabinho from receiving the ball as Grealish marked him tightly. But this allowed Joel Matip from centre-back to carry the ball himself and attack the space. Liverpool started their attack via Matip multiple times. 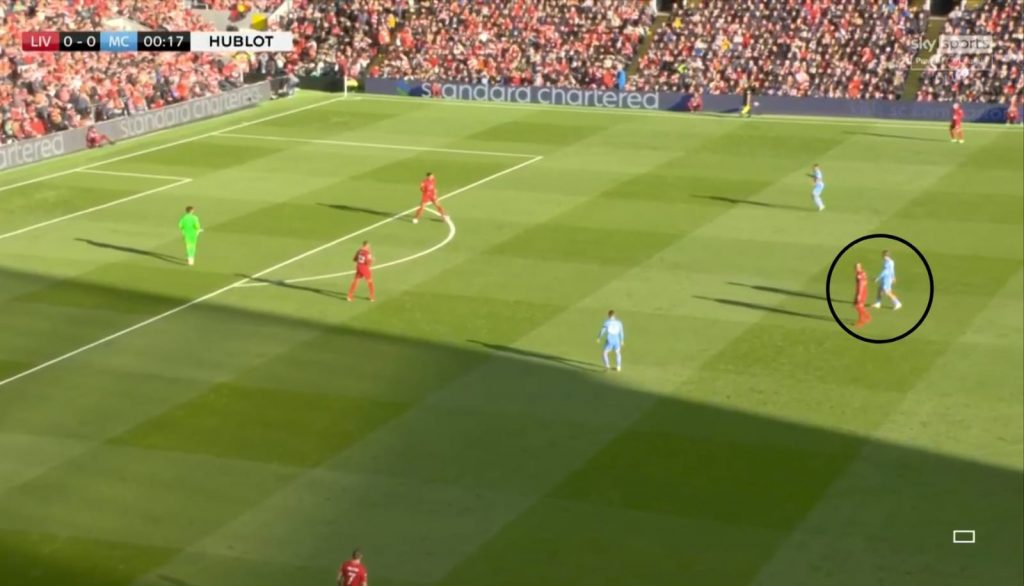 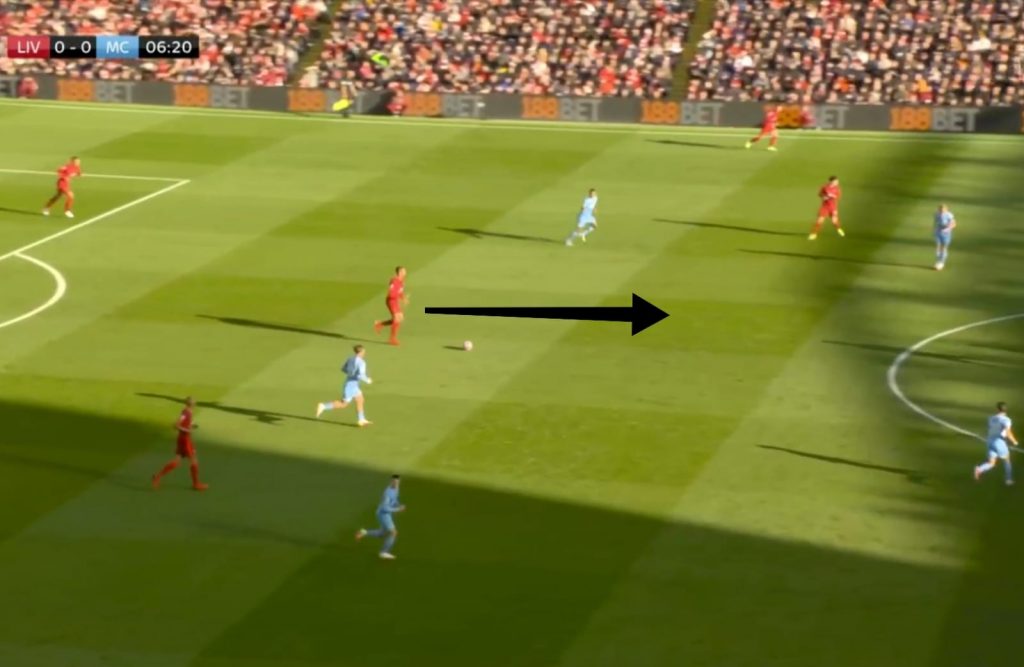 After realising this, Pep changed Manchester City’s press to a 4-4-2 with one of the central midfielders joining Grealish. This made sure that Fabinho did not receive the ball and Matip couldn’t run into the space. 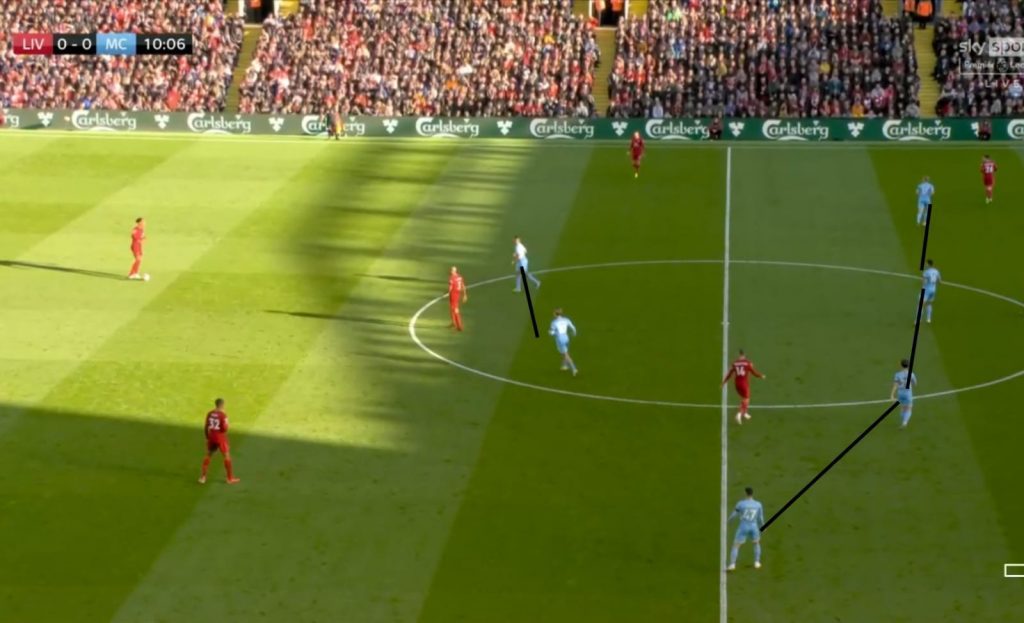 Cancelo and Kevin De Bruyne picked Foden time and time again as they targeted James Milner. But the lack of runners affected City’s attacking momentum. Grealish as false 9 – dropped deeper and linked up the play well but struggled to make runs.

Here, Cancelo receives the ball and is driving towards the space. Grealish moves wider instead of making a run into the box to provide an option for the left-back. 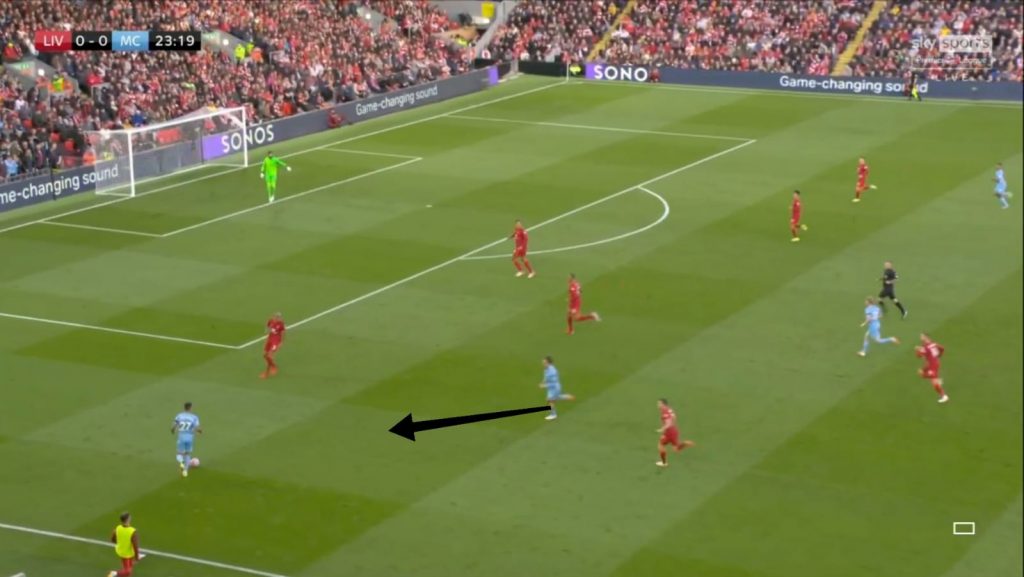 Once again Cancelo picks Foden with a delightful outside of the boot pass, but Foden has no options in the box. He ultimately has to go backwards and passes it to Bernardo Silva instead. Liverpool was compact and used a high line. It was much easier to defend since City had no players who could run in behind the defence. 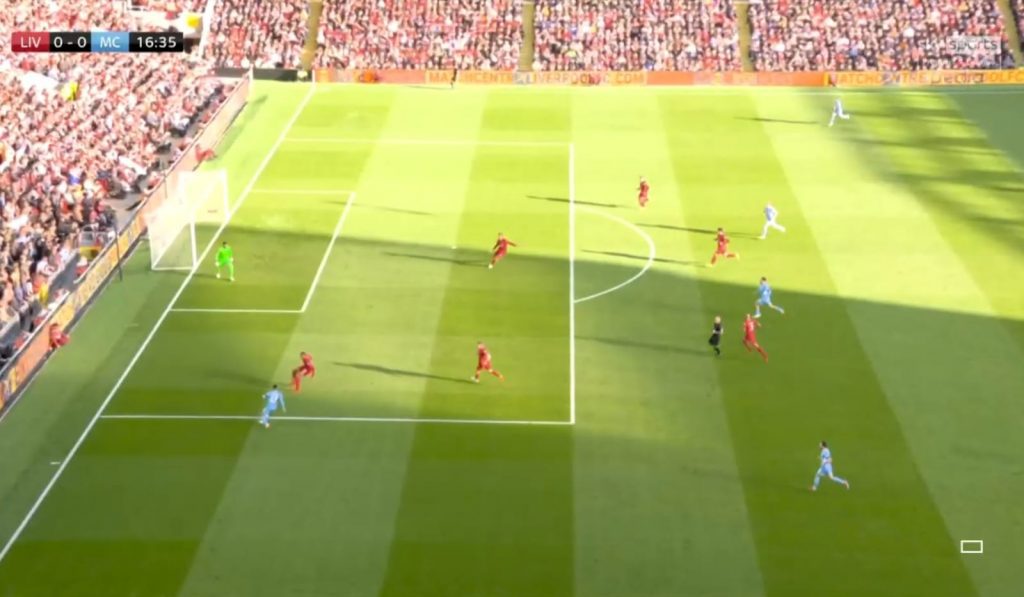 The first half as Gary Neville put it – Manchester City expected a storm but were met with a gentle breeze. It was surprising, to say the least as Liverpool sat back and were not aggressive like their usual self. City should have gone ahead as they dominated the first half but would rue missing chances.

Jurgen Klopp in his post-match interview gave a long tactical insight on what Liverpool missed in the first half. He told:

“Man City with the ball is a proper team. There are ways to defend it – you have to close down the spaces and to do that you have to step out in specific moments. I’m not sure I’ve seen many games where City can pass so easily through the half-spaces. They had chances, but they didn’t score from that.”

The German manager says his side failed to close down central spaces as City were able to make line-breaking passes with ease. Klopp set his team in a compact shape, so the likes of De Bruyne and Grealish receiving the ball centrally and switching the play to Foden was not a good sign.

Klopp changed all of this in the second half. He could be seen shouting ” be brave” in the first half and Liverpool implemented it in the second. He changed the shape Liverpool pressed – Jota was asked to remain a bit deep marking Rodri as Mane and Salah pressed City centre backs aggressively. Henderson and Jones also moved higher up the pitch as the front  5 formed a diamond. They were quick to close the central zones as well.

With the Anfield crowd behind them, Liverpool started the half brightly as City looked for solutions to play out of the press. 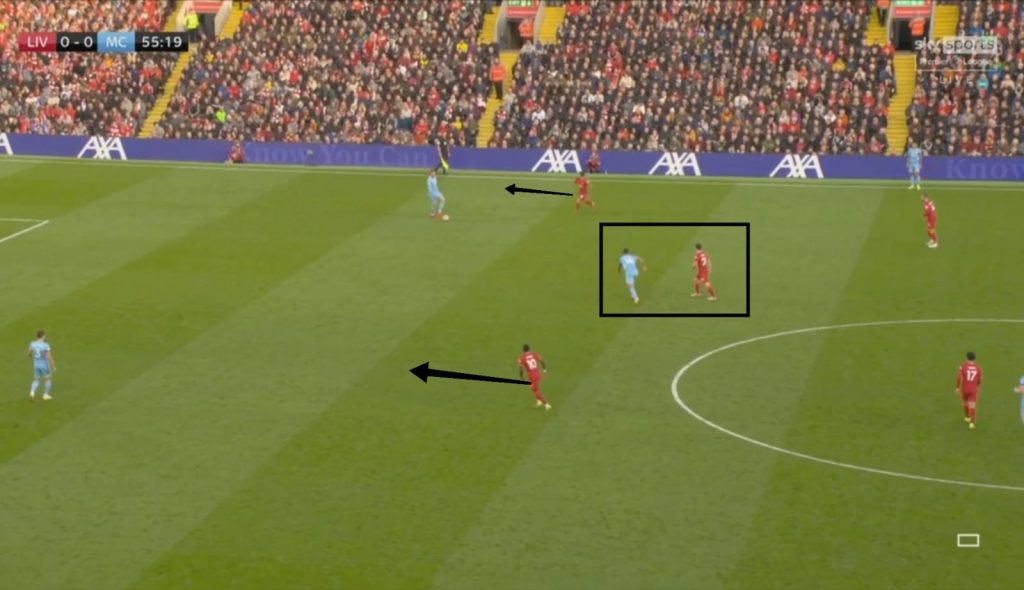 Jota on Rodri, Mane and Salah pressing high up the pitch

In the first half, Liverpool targeted the left side with Mane trying to make runs in behind. Klopp mentioned that they played unnecessary long balls and this also changed in the second half. As a result of aggressive pressing and City conceding possession, Liverpool was able to utilise their front three especially Mo Salah. 53 per cent of Liverpool’s attack started from the right side compared to just 19 from the left.

The opening goal finally came as a result of Liverpool pressure. Mo Salah skips past a poor challenge from Cancelo and Mane – trying to make runs behind Dias all game, scores the goal. Dias checks his shoulder but Mane bends his run across him and the City centre half couldn’t handle his pace. 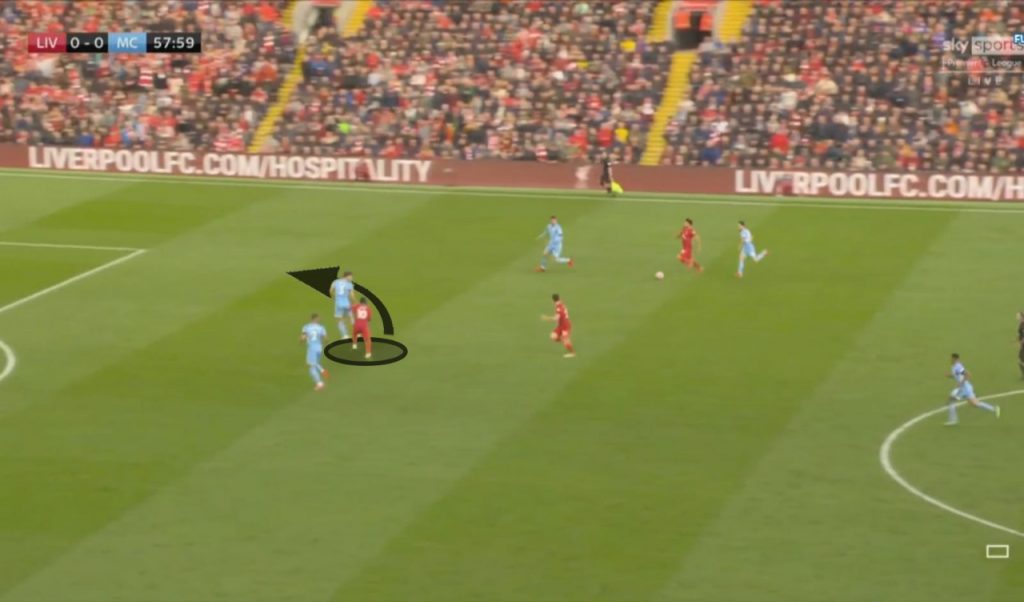 Manchester City responded by bringing Raheem Sterling into the game. This meant that they had someone who is a willing runner and can utilise the space left by the Red’s high line. Liverpool struggled to mark City’s midfielders throughout the game. The likes of Jones and Henderson were quite narrow so Kevin De Bruyne utilised the space afforded to him. 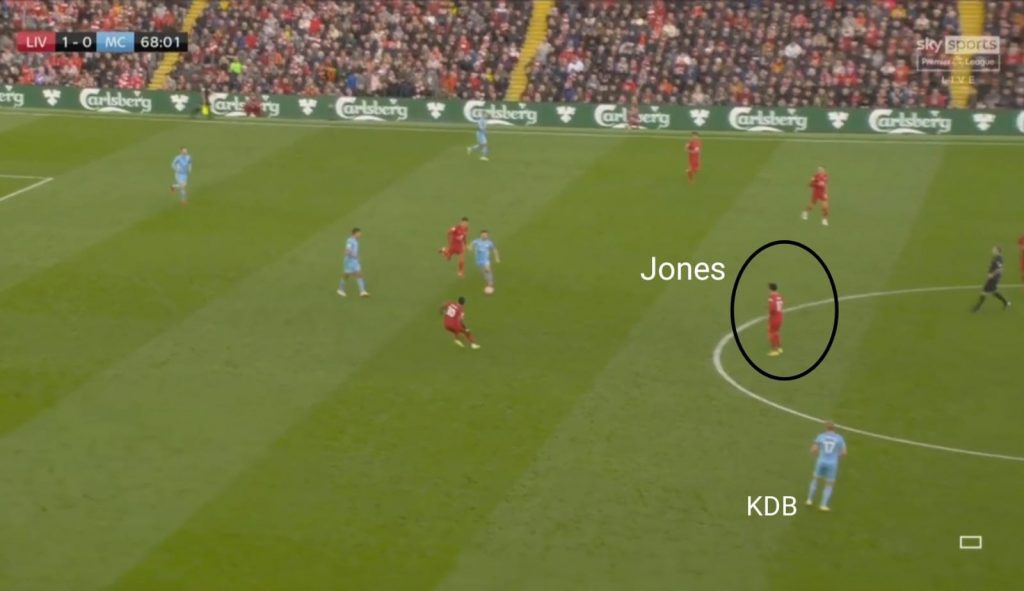 As De Bruyne was offered space, he picked out Jesus who in turn took on players and passed it out wide. Foden – City’s best player on the night, drilled the ball from the left-hand side – into the goal which silenced the Kop. The game was back where it started – 1-1.

The match opened up massively after the equaliser. It was time for Mohamed Salah to show why he is arguably the best player in the league. A moment of individual brilliance meant Liverpool were ahead in the game. He dribbled past 3-4 players and slotted the ball into the net with his weaker foot. A goal for the ages as Anfield once again erupted.

City clawed back into the game. De Bruyne was offered space once again and he needed no second invitation. He picked out a pass to Foden who delivered a cross into the box. It falls onto the feet of De Bruyne at the edge of the box whose shot is deflected via Matip and into the goal.

With Rodri’s extraordinary goal-saving block in the closing stages, the game ended 2-2. City would have been hard done by the fact that the referee Paul Tierney did not send off Milner in the second half. Both teams felt they could have won the game, but a draw is a fair result. This fixture has produced another high quality and intense match. The neutrals would have thoroughly enjoyed the show (especially Chelsea fans).

Manchester City have faced Spurs, Leicester, Chelsea and Liverpool away from home and their fixtures get a bit easier in the coming weeks. Dominant performances in a week against three of the toughest sides is a very good sign for the Blues. Liverpool faces Watford away from home after the break before travelling to Old Trafford.