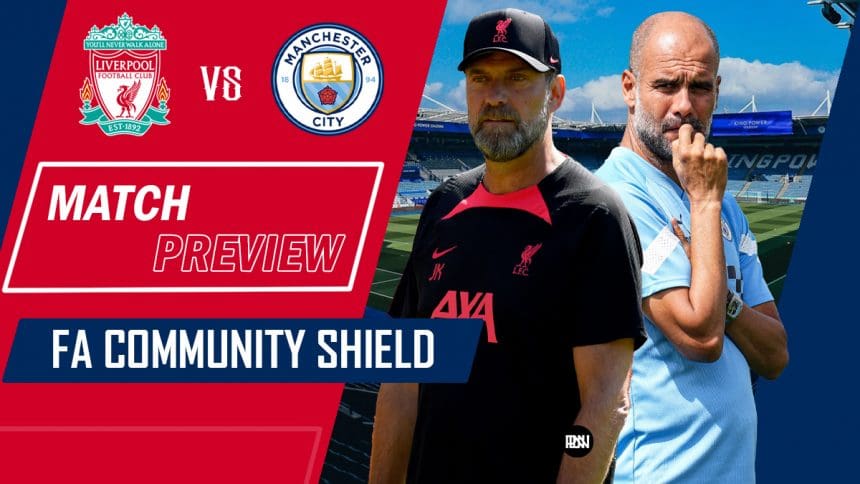 Liverpool vs Man City – it seems the season is underway already with a banger as both of the strong PL title contenders lock horns for the first time this year, to battle it out for the FA Community Shield at the King Power Stadium on Saturday. 2021/22 Premier League winners, Man City, take on the Cup double winners in the Reds, as all eyes will be glued to the two massive English sides with a lot of revamps and signings to look out for this season.

The last time these two sides faced each other, the Reds stood out as the clear victors. It was the semi-final of the FA Cup in a jam-packed Wembley stadium, as Pep’s Man City and Klopp’s Liverpool battled it out to reach the final.

The Reds were off to a rampant start, scoring 3 goals in the first 45 mins of the game and it already looked over with 45 mins of the game still to play. But the Skyblues came onto the pitch with an eye to get something out of the game, and put up a huge fight against their rivals. And they managed to score 2 goals, falling short of just another goal that would have seen the match go into the extra-time and who knows what would have happened from thereon.

But it was the Reds who stood out at the top in that battle of wits and nerves, defeating their stone-cold rivals 3-2 to reach the final of the oldest cup competition in the history of football, and to win it finally after defeating Chelsea in the showdown.

A lot has changed since that game which took place at Wembley, on the 16th of April, as both of these sides have been a part of some serious business in the transfer window this summer.

Another noticeable signing is the young Portuguese midfielder, Fabio Carvalho, from Fulham. And despite losing the likes of Origi and Mane, to Milan and Bayern respectively, it looks as if the Reds have done a good business and have compensated for the losses. But it is still too early to call a winner or a loser for the season, and that is where a competition like FA Community Shield could come into the fore and give a good quick look as to what the fans can expect from their respective sides. And at the same time, it eases the pressure from the shoulders of the incoming players, going into the new season- in a completely different setting.

Pep Guardiola and Manchester City have done mighty and tactical businesses of their own. Getting Haaland into the squad up front, along with the Argentinian sensation Julian Alvarez, before selling Gabriel Jesus to Arsenal and Raheem Sterling to Chelsea. Adding to their star-studded midfield, they have also signed Kalvin Phillips from Leeds United who seems to be a sustainable cover-up for what Fernandinho used to provide for the side. With these some of the major changes, many have already put the Premier League Crown on City’s head for the 3rd time in a row even before the season has started!

However cynical it may sound, trust me it won’t come as a surprise if we see City being crowned as the Champions yet again. Then again, to each its own, and it’s just too early to crown a champion or to label someone as a loser. But at the same time, Saturday could dictate a huge narrative as to how the sides could lineup going into the season. We could see the likes of Haaland, Nunez, Van Dijk, Diaz, Ruben Dias, etc. taking scrap at each other. It is about to get hot and spicy, and to remind you the Premier League has not even started yet!

Liverpool faithful would be praying that the team get over with these injury woes already before the season commence, as the Kirkby medical bay has been quite well-occupied with the players looking to make a return from their injuries or so.

The list just keeps on increasing after, recently, Kostas Tsimikas picked a knock in a training session to join his teammates in Alisson (abdominal issue), Diogo Jota (hamstring) and Alex Oxlade-Chamberlain (Knock).  Even the new signing Calvin Ramsay has been nursing physical problems with Klopp’s second-choice keeper Caoimhin Kelleher.

Other than that, it looks perfectly poised for Nunez to mark his first major debut for the Merseysiders as Firmino is being heavily linked with a move to Juventus (rumours).

Meanwhile, Manchester City does not have Laporte for the Saturday clash, as he is sidelined due to a knee injury. Other than that, Pep Guardiola will be having the defensive trio of Dias, Stones and Ake at his disposal, alongside Cancelo and Walker.

Moreover, we could get a glimpse of the whole new looking Man City attack of Mahrez, Haaland and Foden – that would be expected to wreak havoc in the coming season. 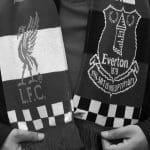 What are the greatest rivalries in the Premier League?
Next Article 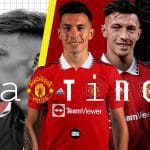 Under the lens – Lisandro Martinez to Manchester United
Leave a comment