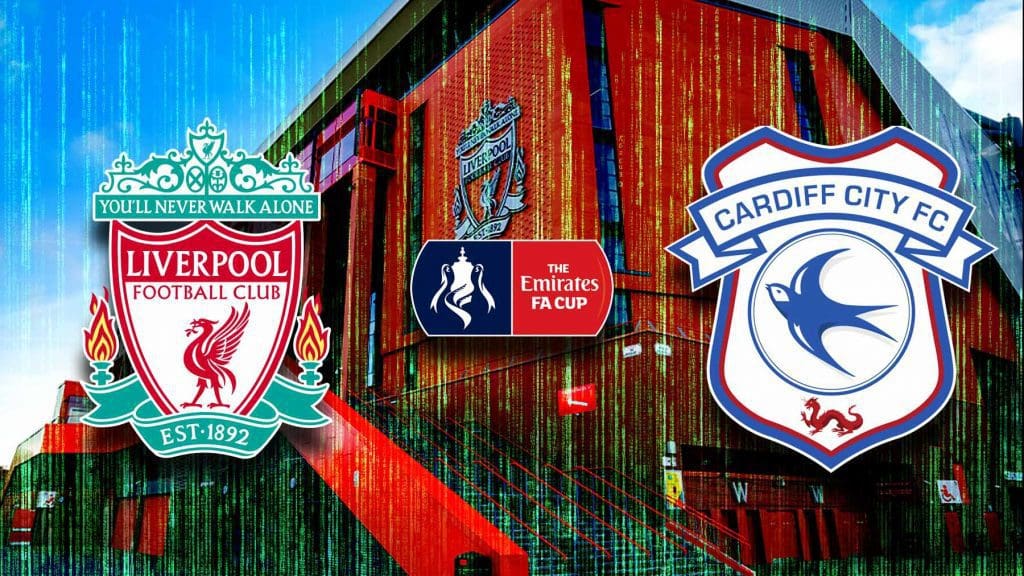 It will be almost 2 weeks since Liverpool’s last on-field action, on Sunday, when they will face Cardiff City in the 4th round of the FA Cup at Anfield.

As for the Welsh club, it will be their 2nd game in the span of just 3 days. Although the team from Merseyside will be going in as the favourites, this is what cup games can bring to you – an element of surprise!

So far, Steve Morison’s side have had a very sour season. Currently sitting 20th in the Championship, well below their expectations. There is fear in the camp, as well as amongst the fans, of getting relegated.  Not an ideal situation for any player, or manager alike to be in. But, this is football- dealing with the ups and lows of the season as they come by.

Meanwhile, Jurgen Klopp’s side is buzzing with confidence, fans will be hoping for the same on Sunday as the lads from Liverpool look to extend their 16 match unbeaten run, across all competitions, against the visitors here at Anfield.

What makes this run even more special is the fact that the players showed fighting spirit even in the absence of their two-star players. Mo Salah and Sadio Mane have been representing their national sides in AFCON for about a month now. In the beginning, there was a lot of jitters going around the club. Mainly, the absence of the ‘prolific pair’ can cost Klopp & his men.

On the contrary, the whole team just stepped up during this time, reaching the finals of the EFL Cup, after beating a spirited Arsenal side in front of their home crowd, is not an easy job. Especially when you are missing two of your frontrunners. And now, to the dismay of the Welsh Club, this relentless group of players will be coming on from a break to play the FA Cup tie.

Liverpool clearly have an upper hand over their Sunday’s opponents, Cardiff. With the side in Red having won all the last 6 games, the two teams have played against each other – across all competitions.

The last time Cardiff City visited Anfield, was back in the 2018/19 Premier League season. And if you ask any of the Bluebirds’ fans, they won’t want to remember that visit. A hefty 4-1 loss to go by. If head-t0-heads are to go by, then there is no chance of the Championship side taking anything out of this game; even if Klopp opts out to play some of his youngsters.

Firstly, from Cardiff’s perspective, this is a hardcore test. Given their poor run of the show in the championship this season, a test like this does not even give the slightest of hopes to the team as a whole. However, they will be travelling to Anfield on the back of their two consecutive Championship victories. If there is even a slimmest of a chance for them to take something out of the game, then Steve Morison will surely be telling his players to step on the field with the same confidence and momentum on Sunday.

While they are already threatened by the relegation on their shoulders. Steve Morison will surely not be prioritizing a cup run for a place in the Championship next season as well. So, it should not come as a surprise if Cardiff chooses to play with 5 at the back. Coming into the match, they will aim for the draw. But, it is easier said than done to put everything into perspective.

Playing on the counter against the top teams, playing on their mistakes, Championship managers for long have been adapting to this gameplay, when their team come up against a Premier League side. Only for how long the same strategy can work, one must wonder?! The travelling fans will be hoping that their team somehow work their way out of the inevitable loss.

On the other hand, there is this Liverpool side who are in a free goal-scoring form this season. Every single time they look to push forward, they do it with intent, and it looks to be a goal threat. Mo Salah broke all grounds of scoring, before leaving to represent his nation in the AFCON. And now, the Portuguese maestro, Diogo Jota has taken the charge in his absence. He has already scored a total of 14 goals this season, across all competitions, in just 28 games.

While there have been no shortage of goals from Klopp’s men, this season, the defence has also started to take shape, after the midseason blemishes. With Matip and Van Dijk developing an amazing partnership, in front of their Brazilian shot-stopper Alisson. Even the new signing, Ibrahima Konate has looked a strong companion to either of the two to fill in, in games where the German has looked to rest his first-choice center backs.

It seems, there cannot go anything wrong this season for the men from Merseyside, apart from their self-caused miseries. In the recent few games, Jurgen Klopp has martialed his players to play organized and compact football. Commanding a game more authoritatively, without losing a lot of possession. A similar style of football will be expected from the Reds, who will be going as a more suited side to win this cup tie against a slightly weaker opponent. But the German manager, given his history, would surely not doubt the underdogs.

After the conclusion of the AFCON semifinals, Jurgen Klopp will be expecting both – Mane & Salah – back before the key clash against Leicester City in the Premier League, after one of whom will be crowned as an African Champion.

Meanwhile, the German’s relief over the return of Harvey Elliott & Thiago Alacantra, was resounding enough in the pre-match press conference, earlier on Friday. Despite, reiterating the fact that Elliott will be the part of the 26-man squad getting ready to face Cardiff, on Sunday, Klopp also explained why he cannot risk Thiago’s return just yet – as the Spanish has incurred a minor chest infection.

Liverpool’s new signing, Luis Diaz, arrived at the Kirkby training center later in the evening, on Friday. Although his arrival brought smiles, supporters around the globe might have to wait to see their newly bought star player, play his debut match as a Red. While Nat Phillips and Neco Williams, are out on loan for the rest of the season, it is the chance for Joe Gomez and Conor Bradley, respectively, to show their paces to the gaffer.

As for the away camp, it does not look good defensively. They lost one of their experienced defenders, Sean Morison, to an injury in their clash against Barnsley, in the Championship game.

Steve Morison & Cardiff have an uphill battle at hand, as the 4 players Max Watters, Cody Drameh, Alfie Doughty & Ikpeazu are all absent. They were key in Cardiff City’s 1-0 victory over Barnsley, in the Championship. Now, they will need their youngsters to pull the rabbit out of the hat.