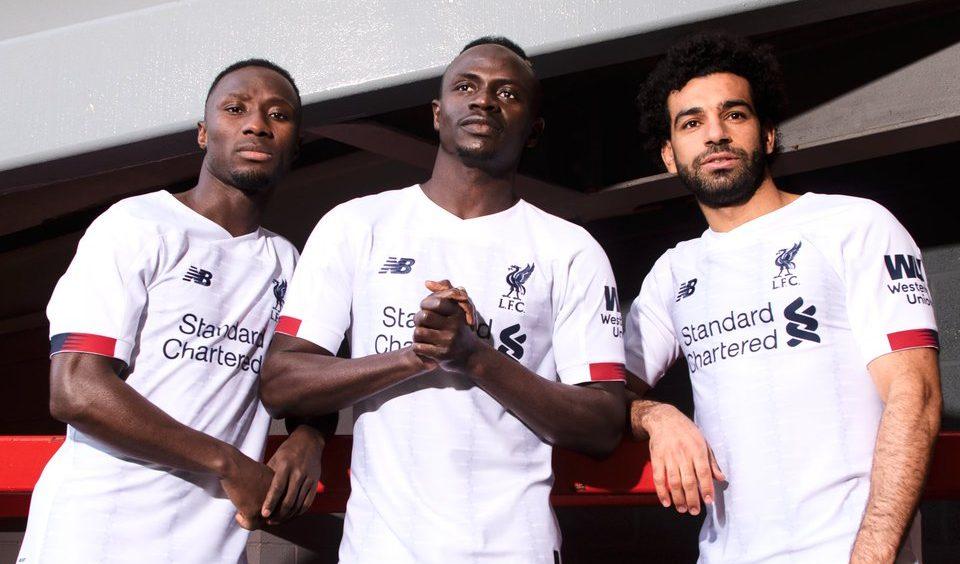 The Europe Champions, Liverpool unveil their new away kit for 2019-20 with Sadio Mane, their superstar modelling in it.

Sadio Mane revealed the new away kit – dazzling white striped tshirt and underneath dark blue shorts with white socks. The new jersey is so alluring that one cannot take his/her eyes off. The goalkeeper, Allision Becker will be seen in green colour jersey.

The home kit design is similar to the away one, having white stripes. The only specialty of home jersey is the red colour and by which they are hailed as ‘RED DEVILS’.

The kit is sponsored by NB i.e, New Balance and have been sponsoring Liverpool since 2015 for an amount of £45 million per season. The 2019/20 is the last year of their contract and therefore now, Liverpool has kept the market open for sponsorship of their jersey after the current contract with New Balance expires and speculations are dangling around Nike of signing the contract for the Red’s in upcoming seasons.

Liverpool will lure much potential investors for sponsorship of jersey, which will result in gaining of more funds, as they are the Champions of Europe elite clubs and along with it were second best in Premier League after scoring 97 points in the whole season but still were deficit of a mere single point from domestic treble winner, Manchester City.

There’s huge fan following of Liverpool club and club away kit is out to public for sale at $59.99. Each year the demand for purchase of new jersey exceeds the supply and their expectations.

Having finished with mixed emotions of winning and losing, satisfaction and disappoinment , Liverpool in their new kit will aim to focus at their winning ability and clean sweep every obstacle trying to block their glorious vision.

So lets see, if the new dazzling jersey can add up some vivid colours to their journey or will it set an example to prove the proverb that ‘all that glitters is not gold.’

Ready for more special away days.