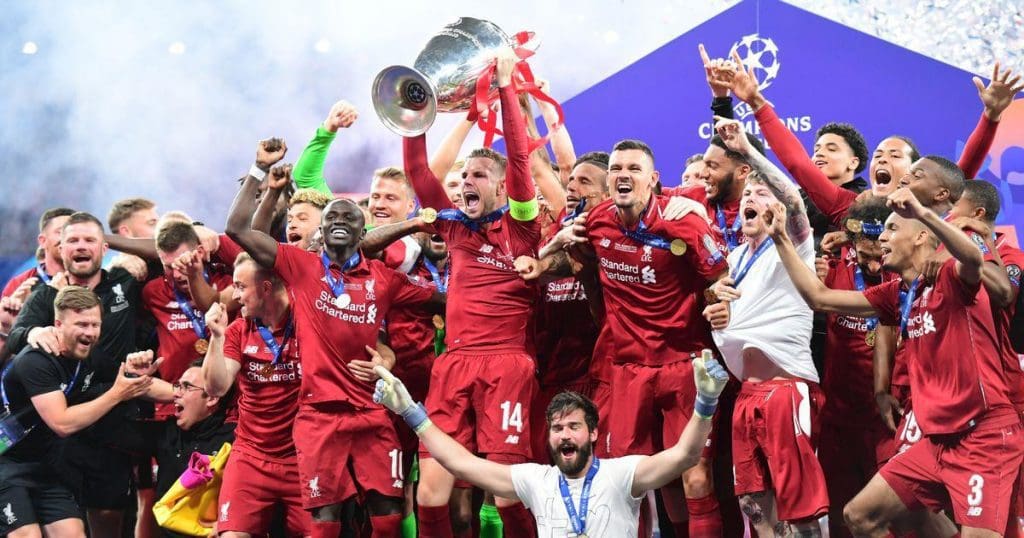 Liverpool’s dugout finally got cheered up after defeating their own English-Rivals, Tottenham Hotspur in UEFA Champions League by 2-0 and hence claiming the European Cup title sixth time in their history, last was in 2005. In addition to it, they also liberated their sorrows from last year’s defeat against Real Madrid.

The early breakthrough goal at 2nd minute of match made by notable Mohammad Salah was proudly welcomed by the fans. Sadio Mane, should be immensely proclaimed as his effective presence of mind to chip at opponents stretched hand in the box , that to in final game, rewarded Liverpool with a penalty that was easily passed behind goalkeeper , Hugo Lloris by determined Salah – who missed last year’s final due to shoulder injury during the match.

Salah’s desperateness to score goal was paid off with a penalty, which set an opening pressure on Spurs. The long dry goalless spell of football occurred with both playing too carefully to pass the ball behind the goalkeeper. Allision Becker stood like mountain to not let Tottenham battalion have any chance of jubiliance by scoring an equaliser.

Despite Mauricio Pochettino side dominated throughout the game and attempted every now and then to make an equaliser , yet everything went in vain. Both the clubs had struggled inevitably upto their best beating the top clubs of the world to reach until here but the ultimate winner can be only one and Liverpool have their name written in golden blocks.

Liverpool had always played as a one-unit and the chances were a little higher for them to gain victory over Tottenham Hotspur not because latter was a weaker side, but because they were a much stronger side with Roberto Firmino also returned after an injury to accompany Mohammad Salah and Sadio Mane , the three incredible strikers of this era.

Jurgen Klopp ended his six year long trophy drought and feels elated to bring victory glory for Liverpool. For straight six years, Klopp aided Liverpool’s journey towards final but couldn’t accomplish it yet this time he has finally broken the shackles of binding loses.

Mohamed Salah will be a must watch this time!
Harry Kane takes on twitter after Champions League draw
To Top