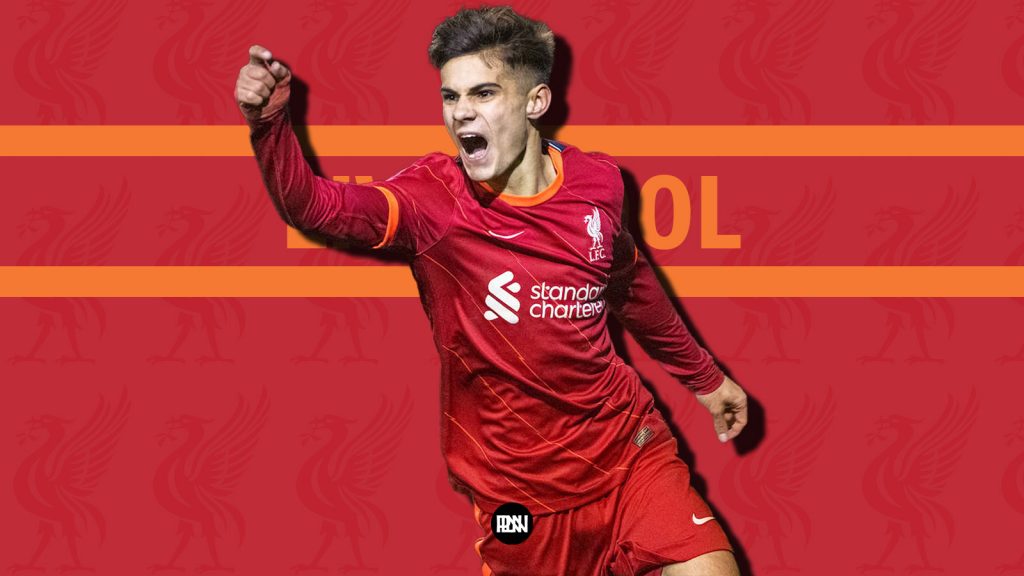 A 17-year-old teenage sensation from Leeds United making strides at Liverpool, Oakley Cannonier is ‘the’ one to keep an eye on moving forward.

Well, for all of you who do not know him – Oakley is the infamous ball boy who played the ball early to Trent for that “corner taken quickly… Origi!” moment on a special night at Anfield in the Champions League, against Barcelona in 2018. While many might think that, it was the moment of his life. But the young sensation had bigger ambitions panned out for himself. For anyone to go big time, the mentality is a prime factor. And Cannonier had exactly that.

From a very young age, the Yorkshire born teenager showed promise, and after he joined the Liverpool U12s from Leeds United, he just developed into one of the rising superstars. Although Oakley expressed how he liked creating more goals than scoring them earlier in his career, he has now developed into one young goal-scoring machine at Kirkby.

“I used to assist more, I used to be a No.10,” Cannonier said in an interview with LFCTV. “Dropping deep and stuff – what I do now as a striker – has helped me. I don’t mind putting a shift in for the other boys and try to set them up, and not just think about myself. But with the goals I have scored, I’ve also found myself in good situations.”

Meanwhile, with all of the rise and displays on show, the 17-year-old forward finally achieved what he wanted to and what he deserved- his first professional LFC contract.

🧠 Genius from Trent Alexander-Arnold
❄️ Cool finish by Divock Origi
👌 What a way to complete THAT comeback!#UCL | @LFC pic.twitter.com/mnz5oSF11q

Since signing a new contract this season back in July, Cannonier has exploded onto the scene, as if the teenager has found a new boost in his confidence. He is already a top goal scorer in the U18s Premier League, with 21 goals- 5 clear from the second-best – in just 19 league games. While he has scored 23 goals in just 30 games, across all the competitions, for Bridge-Wilkinson’s U18 side. Oakley’s overall game has been amazing to watch. At such a young age he has a game sense similar to the players, playing at a senior level.

As mentioned earlier, he can create opportunities for his teammates to score as well, with the good movement off the ball. As much as he doesn’t like scoring, his finishing skills are overpowered.

“When I was younger, I used to love Torres. But then after he went to Chelsea, it was Suarez. I loved those two. They were just goalscorers and they were always the decisive players and I wanted to be like that” he revealed to LFCTV.

After seeing those stats no doubt, he loved watching Torres and Suarez growing up!

Cannonier lacks in size but makes up for it with his work rate, skillset & persistence

For a 17 year, the Yorkshireman stands not so tall with an average height of about 5 ‘4. But, to be fair to him he does not need a tall, lean build to excel at his position when he has got an all-star skillset at such a young age. He is one of the quickest on-field academy players with the ball at his feet. Oakley’s highlighting factor, however, has been his game sense. Throughout the season, he has made a statement in the U18s Premier League with his ability to drop back and drive the play forward.

While many of you must be confused because this is similar to a typical Harry Kane style play, I will ask you to just hold your thinking right there, it’s not done yet!

If you will watch him play his movements, on and off the ball, will give you goosebumps. The 17-year-old academy prodigy makes well-timed runs in behind defenders giving them absolutely no chance whatsoever. Similar to that of, one of the best Premier League strikers, Jamie Vardy.

Meanwhile, if we talk about his finishing, there is only one word that comes to mind – Elite. Yes! As much as I love to say that he is a fiery finisher, I take pride in saying that this Liverpool academy talent is as composed as some of the big guns of world football when it comes to finishing.

“Oakley is scoring goals, he gets chances and what we can say is over the course of this season when he stays fit, like he has done, we know that he is capable of scoring goals.” Cannonier’s U18 coach, Bridge-Wilkinson, told the press.

“Oakley creates moments of magic for us,” Bridge-Wilkinson is all of us Reds when we see him play

Since the start of the 21/22 campaign, last summer, Oakley is having some dreamy start to his career as well. From getting capped in the England U17s squad to marking his debut in the UEFA Youth League with a banger, Oakley Cannonier is just outdoing himself, with his outgrowing list of achievements.

Oakley is an academy prodigy, that is for sure. But at the same time, he is unstoppable! Finishing from left, right and center is not easy to go by. For his manager, Oakley is already more mature than a lot of players his age. “I’ve known Oakley for a long time now. He is a really good footballer, he’s an intelligent footballer, he understands the game and what it needs in certain moments”.

While there are not many players, nowadays, who can play flexibly at different positions as per the need of the situation. The young Oakley certainly is of that kind.

“Oakley can play as an out-and-out No.9, he can play as a No.10, out wide or an attacking midfield role. I’ve seen him play in all of those positions and play really well. We’ve used him down the middle and he’s scored a lot of goals from there, but I think if we played him as a No.10 he would still have a good effect.” Bridge Wilkinson, surely took great pride in saying that!

At 17, Cannonier has time by his side to develop and showcase the world of his real talent. And he is a man of ambitions, as he expressed it in an interview with the LFCTV recently – “I want to be known as a ‘legend’ for a different reason, not for being a ballboy!”

Arsenal away kit for 2022/23 season LEAKED!
Liverpool recent surge of supremacy – A replica of old times?
To Top