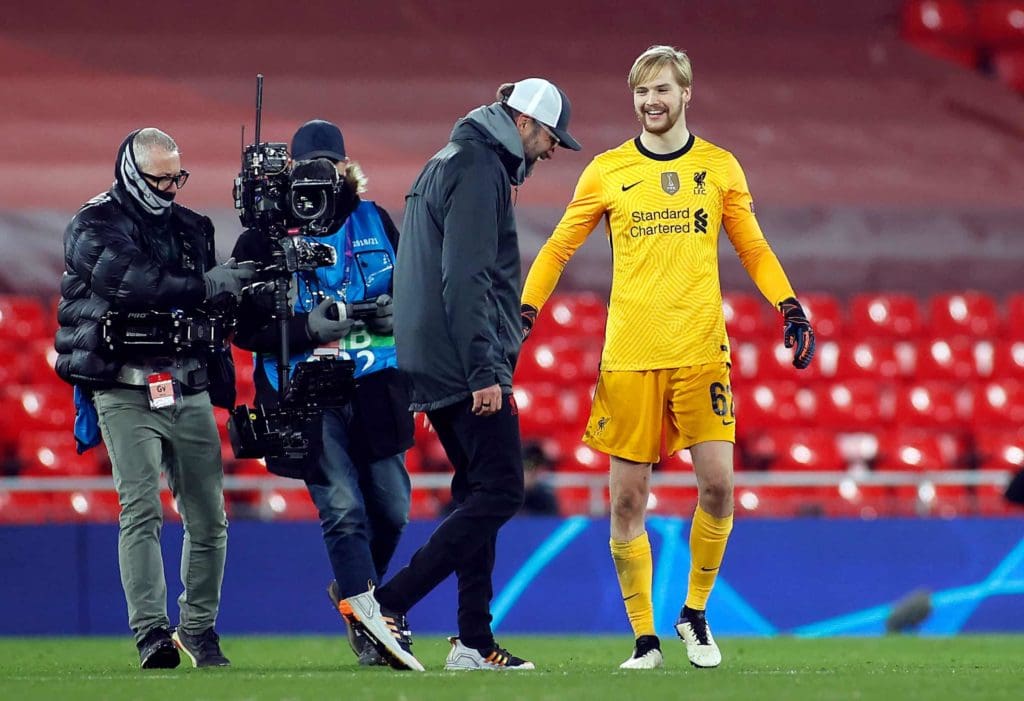 It’s pretty difficult for a goalkeeper to deputize in the absence of a top-class goalkeeper and scale through the huddles of criticisms and morale draining comments from the fans immediately after the game.

Not many young goalkeepers could rise to the occasion in a high-level competition after bringing the ball out of his own net seven times, in a far lesser quality (PL2) game, against Manchester City’s U23 team.

Less than a week after his horrendous outing, a certain young goalkeeper from Northern Ireland, made a name for himself against an electrifying Ajax senior team and also keeping a clean sheet on the night.

Caoimhin Kelleher proved against Ajax on his debut in the UEFA Champions League encounter that he’s capable of getting the confidence of his manager Jurgen Klopp to mount the post whenever the need arises.

Speaking to BT Sport, he said: “It was amazing for me to make my debut in the Champions League, and obviously the most important thing was to get the win and quality.

“It’s quite easy for me to be honest, because the players in front of me, when I get the ball they make easy options for me, so they make my decision so much easier.

“We’re not here just to take part, we want to push every day and try to play as many games as we can.

“My phone has been hopping since I got in! A big thanks to all the support and messages I’ve been getting.”

Caoimhin Kelleher is a 22-years-old Northern Ireland goalkeeper, formerly a striker who has been heralded as a player capable of scoring between 20-30 goals on a regular. Kelleher joined Liverpool at the age of 17-years, from his local side Ringmahon Rangers, Northern Ireland, in 2015 summer. He has so far been involved with the Reds academy and growing through their developmental ranks till date.

He had his most notable involvement with the senior team during their preseason program in 2018 and further went on a tour with the other first team players in the United State.

During the same summer after the tour, the young impressive goalkeeper signed a new contract with the Reds, keeping him at the club beyond the initial year.

Though he was recovering from wrist surgery, Kelleher was again named on the bench for Liverpool’s victory in the 2019 UEFA Super Cup encounter against Europa League winner and also Premier League rival Chelsea in Istanbul, due to the absence of the team’s first-choice goalkeeper Alisson.

The 22-years-old made his competitive debut for the Reds on 25 September 2019 in the Carabao Cup third round match against League One side Milton Keynes Dons, keeping a clean sheet in the 2–0 away win.

In his recent involvement with the Reds first team, the Irishman was backed to replace the injured Brazilian international keeper Allison, and was surprisingly done while Jurgen Klopp had an option to choose a more experienced and fully fit Adrian but instead, the German tactician gave Kelleher the nod, which eventually turned out to be a wonderful selection.

Eddie Harrington, Kelleher’s former coach at Ringmahon, spoke to Cork Echo in 2018 about how being a striker at one point helped Kelleher to get into the mind of opponents.

“Nothing fazes him,” said Harrington of Kelleher, who would score “20 or 30 goals a season” up front. “He won’t let mistakes get to him.

“He used to say it to us that he could read a striker going through because he was so good at scoring goals himself that he nearly knew where they were going to put it as such. His feet were excellent.”

Been a former striker, the young keeper showed his ability to get into the striker’s head, which was evident when he made some decisive saves against Ajax, most notably his fully stretched save to deny Jan-Huntelaar a reason to have his name on the score sheet.

His reflexes was full of quality, while his confidence and composure between the sticks looks far beyond his age. His calmness on the ball helped his team to make quick transition from the back, as he was able to make precise forward passes to the onfield players.

His passing range, accuracy and calmness on the ball was a joyful demonstration of an art by the Irishman. Kelleher’s passing accuracy on the night was 71 per cent, compared to Adrian’s average of 65 per cent in his three League and Champions League appearances so far this season.

“I really think Adrian has done a fantastic job for us, he kept a lot of clean sheets, played everywhere,” Klopp said.

“But now we needed the natural football playing ability of Caoimhin Kelleher. We needed that for the pressing of Ajax, we needed his chips from him into the half-spaces and these kind of things.

“He is a good shot-stopper as well. We made that decision but you never know how they are going to cope. I am really happy with how calm he was and how good he was.

“In the end, it is about keeping the ball out the net and he did that twice and he did that in an exceptional manner. He will either sleep really well tonight or not at all.”

Jurgen Klopp’s gamble obviously payed off, but the question remains that; will Kelleher’s performance against Ajax ear him a more prominent role in the Liverpool’s seriously hit squad this season?

On Saturday, 5th December, 2020, Liverpool will be hosting Wolverhampton Wanderers at Anfield stadium;

Will Kelleher retain the first choice callup or will Jurgen Klopp go with the Premier League experienced goalkeeper Adrian?

Will there be a takeover at Burnley?
How many fans will each club be allowed to have in stadiums?
To Top