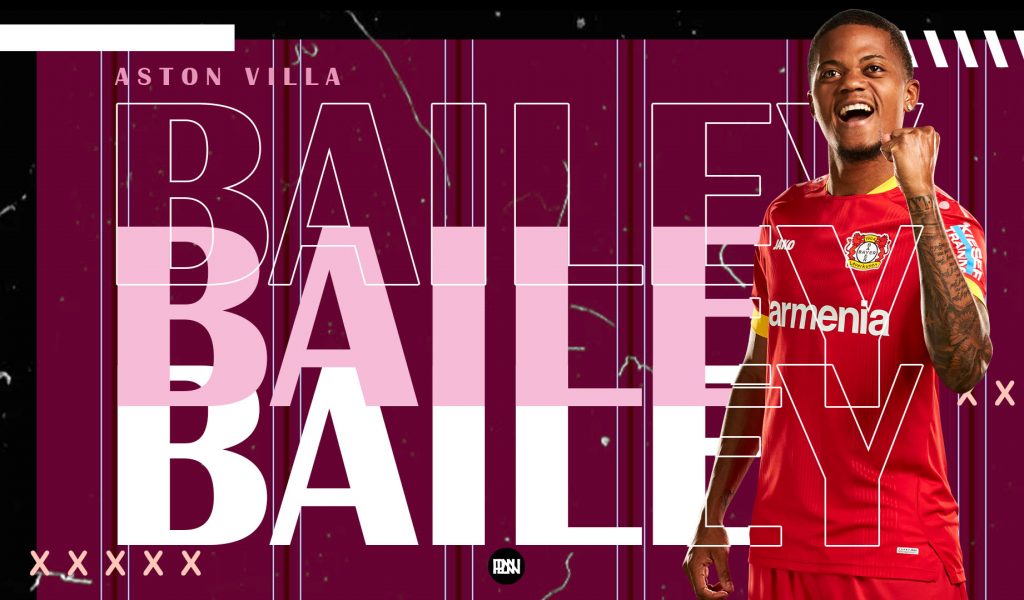 Aston Villa have lost their boyhood hero in Jack Grealish after the Englishman completed the most expensive transfer in the history of British football as he joined Manchester City in a move worth £100million.

While this was not Villa’s ideal situation, they have done some excellent business in the market, and it looks like they have already utilised more than 4/5th of the money they got from Grealish’s sale. The Villans have signed the likes of Emiliano Buendia, Danny Ings, and Leon Bailey – the Jamaican winger from Bayer Leverkusen, who scored 9 goals and provided 8 assists in the Bundesliga last season.

Bailey, 23, spent four and a half seasons at the German club and was one of the most talented youngsters in their squad. The Jamaican had attracted interest from the likes of Manchester City, Manchester United, and Liverpool last season, but all three clubs were thrown off by the player’s £40million price tag. However, Villa have completed some neat business by signing the player for £25million on a four-year deal.

Dean Smith has been ecstatic with this signing, and it would be interesting to see where the Jamaican plays for the Villa Park outfit.

Firstly, let us take a look at how Villa set up last season and how they would approach games:

After barely surviving in the 2019/20 Premier League season, Villa managed an impressive 11th place finish, thanks to some of their attacking play, a lot of which was down to Jack Grealish. The boyhood Villa fan was great at drawing fouls, creating chances, and being clinical in front of goal. However, Villa’s signing of Ollie Watkins last season was also an eye-opener as the former Brentford man scored 14 Premier League goals in 37 appearances. Anwar El Ghazi had also hit a rich vein of form towards the end of the season while the start of the season was characterized by Chelsea loanee Ross Barkley.

Thus, a lot of factors to consider, let us walk through them.

More often than not, Aston Villa would play in a 4-2-3-1 system last season as they had a steady back four and had the likes of Douglas Luiz and John McGinn acting as the double pivot in the centre of the pitch. The two midfielders were excellent in recycling possession and retaining the ball back if Villa lost it. Ahead of them, they had the likes of Jack Grealish, Ross Barkley, Anwar El Ghazi, Trezeguet, Hourihane, and Bertrand Traore, depending on the three players Villa were playing on a particular matchday, while up top they had Ollie Watkins. Dean Smith’s men were playing some good football at the start of the season, which was characterized brilliantly by their 7-2 win over the then Premier League Champions Liverpool.

That day, Villa set up in a 4-2-3-1 as they had Ross Barkley, Jack Grealish, and Trezeguet in their midfield. While Grealish stayed out on left, Trezeguet stayed on the right, with Barkley playing just behind Watkins. Barkley’s understanding of space and ability to find spaces in between the lines created a lot of problems for Liverpool, something Jack Grealish exploited. Grealish was staying out wide and was stretching the play, leaving a lot of space in the center for Barkley. Thus, either one would be in relatively vacant space, which only increased after Liverpool were down by 2 goals. Soon, Villa put 7 past Klopp’s men in a historic victory.

While this was an anomaly and a freakish day in the Premier League, Villa and Dean Smith deserved a lot of credit. However, this was only a taste of the potential this Villa squad had. However, as the season went, they did have some ups and downs, however, they also had valuable replacements.

The reason Villa could walk over Liverpool early on in the season and have different players work in their system constantly was because of their flawless tactics.

Dean Smith’s tactics function on working with and without the ball. However, the idea is always the same, make the best use of the space you have. While Villa were not the most active pressers of the ball, they knew how to corner and isolate the opposition into making an error, and their frontline was capable enough of punishing the opposition for these errors. They were not continuous pressers of the ball but they were calculated pressers.

Going forward, Villa were creative, innovative, and clinical while they were also feistier than the opposition. They made it hard for the opposition to dispossess them, while they also knew how to keep the ball away from the opposite team. A lot of this stemmed from their attacking midfielders to find spaces in between the lines, while the likes of McGinn and Luiz knew how to pass the ball into these spaces. The utilisation of the ball and space were the backbone of Villa’s success last season, something they are hoping they can incorporate Leon Bailey into.

So, how does Leon Bailey fit into this team? There are two roles Grealish has left vacant at Villa, both of which the Jamaican can fill.

Moreover, these are the signs of a potent creator. A player like Riyad Mahrez at Man City prefers playing on the right because, more often than not, he wants to cut in on his favoured and score a goal. Bailey, however, likes to run at the opposition defence and create chances. The Jamaican attempted 136 dribbles last season and had a 57% success rate. None of Villa’s wingers even crossed the 100 mark last season.

In terms of chance creation, the 23-year-old was creating 4.12 shot-creating chances last season, a fair away off from Grealish’s 6.50. However, most of the chances that Grealish created were from brilliant passes, whereas Bailey creates chances by dribbling at the opposition and then finding the key pass. This could certainly work for Aston Villa, who might undergo a shift of formation this season after the arrival of Danny Ings. Dean Smith could function with a 4-4-2 formation with Ollie Watkins and Ings upfront while he could use Leon Bailey on the left-hand side.

An image Villa fans were familiar with last season was Jack Grealish or Bertrand Traore coming deep to collect the ball and carrying it forward 20 or 30 yards by themselves. Bailey can also credit his name to this list this season. Although the Jamaican’s numbers will not match up to Grealish’s numbers, there are not that far away, and they are certainly better than any other Villa player.

Apart from being a creative left-winger, Bailey is also an incredible dead-ball specialist, as he has the ability to whip in brilliant crosses from corners, while he can also score thunderous and sumptuous free-kicks. Additionally, Bailey can also defend as he is a great tackler of the ball while he also knows how to corner the opposition team into giving the ball– a lot like the Villans. While he is not a replacement for Grealish, he certainly can be developed into one and perhaps more. At only 23, Bailey is dynamic, fast, and has the build to quickly settle into the Premier League. Moreover, he does not cause a shift in Villa’s current set up and he suffices their current need– a spark in the attack.

Leon Bailey might not be a big-money move, but the Jamaican certainly has the capability to light up the Premier League.