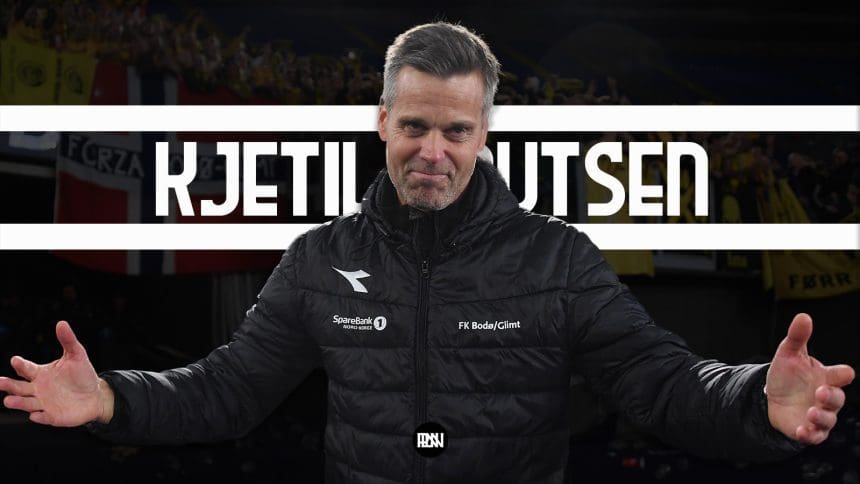 As news broke out that Chelsea have parted ways with Thomas Tuchel, it looked like Tod Boehly had only one man on his mind to replace the outgoing manager. Reports suggest that Boehly immediately asked permission from Brighton & Hove Albion’s CEO to speak with Graham Potter. Such has been the impact he has created not only at the south coast club but in the Premier League as well.

All it took was a day to complete the move as Chelsea announced the arrival of Potter. The start of a new era at the club will excite the Blues faithful, but the Brighton fans will no wonder feel hard done by this decision. The club led by Tony Bloom certainly have a clear structure both in terms of recruitment and the team’s way of playing on the pitch. Replacing Potter is unquestionably a tough task, but Bloom and Co have options on their hands. The football they have played under their former manager was attractive, to say the least, and they will look to hire a manager who suits this philosophy.

Moreover, the players at the club are versatile and have adapted to various approaches that Potter has incorporated during different matches. While the likes of Steve Cooper, Russell Martin, and several others have been linked to the job, there is one standout manager who is the current favorite – Bodo/Glimt’s Kjetil Knutsen. Here is an article on his style of play and what he can bring to Brighton & Hove Albion if appointed.

The Brighton fans hoping the club can appoint someone who has a similar storyline to Graham Potter, are in for a treat with Knutsen. The Norwegian has not managed any club outside of his country, but his impact at Bodo/Glimt is comparable to Potter’s surreal job at SV Ostersund.

Knutsen started his coaching career in 1995, but his rise to fame came at Bodo/Glimt. The 53-year-old joined Bodo in 2017 as an assistant manager in the second tier. In his first season, the club was promoted to the top-flight and their manager Aasmund Bjørkan was appointed as the sporting director the following year. This meant that Knutsen took over the role from Bjørkan in their first year back on the big stage. After finishing 11th, Bodo/Glimt had a remarkable start to 2019. The team finished 2nd in Tippeligaen and then, as is their style, they went one better the following seasons, winning the league in 2020 and 2021.

The most notable result, however, came during their exploits in European football. Bodo beat AS Roma – managed by Jose Mourinho with a scoreline of 6-1 on their home ground. They thoroughly dominated the game with their front-foot approach overwhelming Roma. Under Knutsen’s leadership, the club reached the quarterfinals of the UEFA Conference league last season and are currently playing Europa League where they will face the likes of Arsenal and PSV.

Style of Play and Approach

Under Knutsen, Bodo reached the pinnacle of Norwegian football, and their 2020 title-winning season is arguably considered the best campaign in Norway. He is a manager who likes his team to have possession and attack the spaces when there is an opportunity. Further, Knutsen’s counter-pressing out of possession has been instrumental as well. Bodo also likes to play out from the back and commit men forward.

Before diving into his tactical approach, let’s look at some stats from Bodo’s 2020 season. The Norwegian outfit broke several records on their way to success as they finished with a total of 81 points after winning 26 out of the 30 games and scored 103 goals, conceding just 32 throughout the season. To add to this impressive stat, Knutsen had the youngest squad in the entire league.

Knutsen’s strategy on and off the ball had a huge part to play in achieving this. In the first phase, Bodo build up in a 4-3-3 structure with the fullbacks split wide and a lone defensive midfielder taking his spot centrally. The number 6 is a crucial position as he is usually the free man in possession when the opponents press high up the pitch. Meanwhile, the central midfielders occupy the half spaces, and the wingers usually have one foot on the touchline – stretching their opponent’s back line as a result. 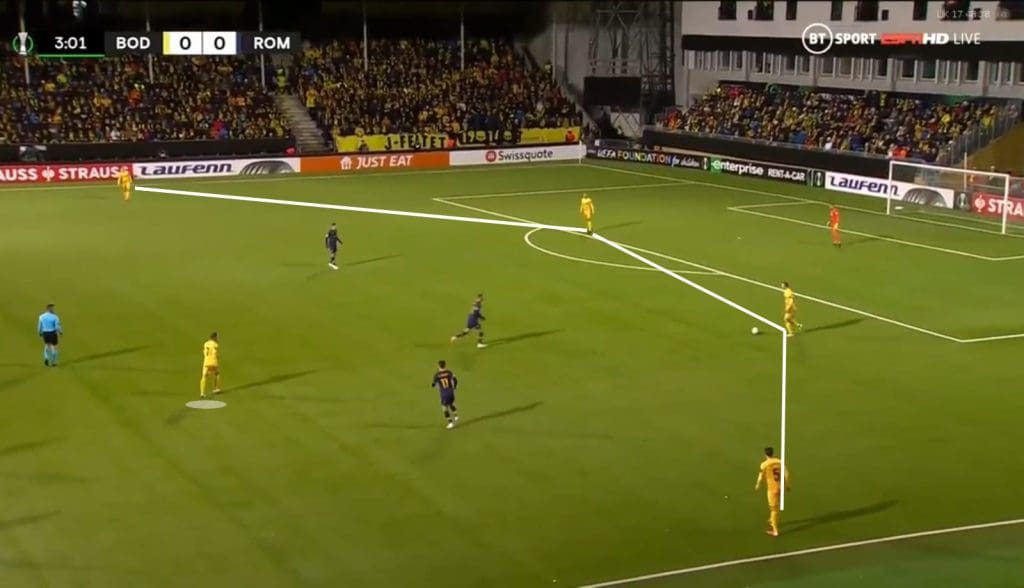 As they structure in a 4-3-3 shape, they tend to form triangles all over the pitch and their positional rotations among the winger, central midfielder and fullback can cause trouble to the opposition. The fullbacks have a huge part to play as they are the ones who look to carry the ball to attract opponents. Since the wingers occupy the wide areas, the fullback also underlaps in the spaces created. 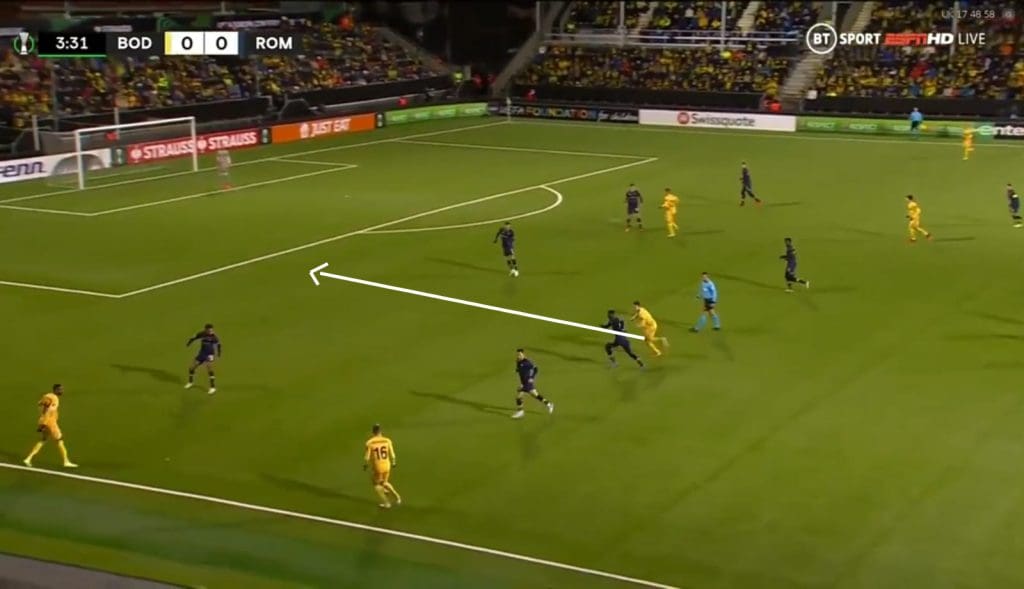 Further, their intricate play is excellent and, in the two situations below, their passage of play, starting from the back, is witnessed. The combination of overloads in the wide areas and committing men forward is also on display.

Out of possession, as said above, Knutsen’s team are quick to close down the spaces. They press high up the pitch with an intention of winning the ball in the opponent’s defensive third. And this approach has been extremely successful in the league since they are clinical in front of the goal.

But Bodo’s compactness off the ball is something that stands out. When they decide to settle in a mid-block, the shape shifts to a 4-5-1 as they look to cover the central areas. And when the ball is played wide as a result, Bodo’s players move to one side and are quick to latch on their opponents, using the touchline as a defender.

Bodø/Glimt are a fun watch.

Super compact, hard to break 4-3-3 mid-block that maintains its shape all across the pitch.

The whole team is within a space of roughly 20×30 meters, ready to steal the ball and launch quick transition attacks. #PSVBOD pic.twitter.com/JzaYYb3o9x

Here’s a sequence that perfectly captures this. Bodo let Celtic’s center halves have the ball and once the ball moves wider, they jump aggressively. As a consequence, they win the ball back and overload Celtic. Additionally, notice how compact the team is. This is a hallmark of the top teams and although opponents can exploit their wide areas, Knutsen’s side excels in covering spaces quickly if their press is bypassed.

Brighton & Hove Albion certainly have players capable of playing in Knutsen’s system. Although Potter had a flexible approach, his chance-creating mechanisms and his defensive shape are similar to that of Knutsen’s. In Tariq Lamptey and Pervis Estupinan, Brighton also have quality fullbacks capable of performing different roles. Furthermore, the technical ability and versatility of the squad will make it easier to work with Knutsen if he takes charge of the team.

It will be interesting to see if he lines up in his preferred 4-3-3 setup with wingers hugging the touchline. Of course, the likes of Leandro Trossard and Solly March can perform in these roles, but they are certainly not explosive and are more technical in terms of profile.

With that said, Bodo have arguably been found out this season as teams are looking to sit back and attack them on transitions. They are currently 10 points behind leaders – Molde FK and are struggling to create as many chances as they have created in the past. So, it brings a question mark on Knutsen’s ability to adapt if possessed with a distinct challenge, but this season’s downfall has partly come as a result of several key players leaving the club.

Knutsen was a surprise package with his success, but he is one of the most experienced and well-respected coaches in Norwegian football. With such credentials in the sport, it’s easy to see why he is rated highly at the top level of football in Norway and Europe. Bloom is also known for hiring managers of Knutsen’s potential and if he can back him in the transfer market, a move to Brighton & Hove Albion is realistic and suits all the parties involved. 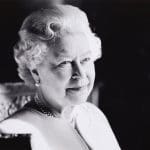 Thank You, Your Majesty!
Next Article