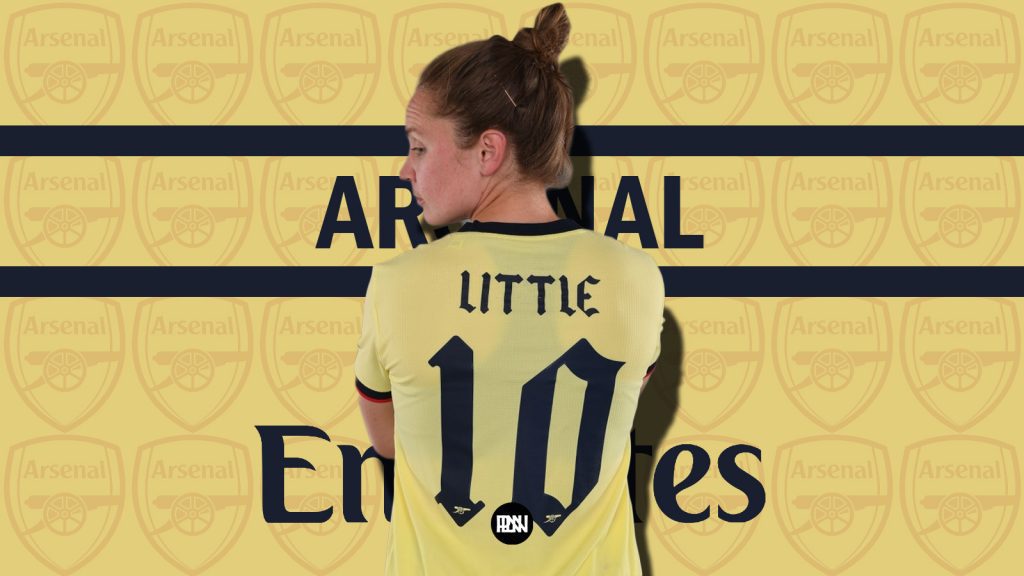 Kim Allison Little. When you hear that name you think of passion, class, ability, and leadership. Kim Little is one of the best players in top-flight history and has dominated many leagues. For Arsenal Women’s team, she had scored over 150 goals in her 10 years at the club, making her a club legend and icon. However, she isn’t only a legend at Arsenal, but also for Hibernian and Seattle (now OL) Reign, as she has scored 88 goals in 48 games for Hibs, after coming through the youth teams. She also scored 32 goals in 63 games for Seattle Reign, and in 2014 was considered the best player in the world by many, scoring 18 goals in 25 games to lead them to the NWSL Championship final, where they lost 2-1 to Kansas. Alas, they were the best team in the league format, and that’s all that matters right?

Anyways, this season, Kim Little has regained her pre-injury form, as she has scored 4 goals in 5 matches, showing continuous brilliance and making defenders look like fools as she easily dribbles past them or sits them down. Last season, she played 16 matches and only recorded an extra goal and 2 more assists but in 11 more matches. However, it seems that Kim has moved past this, and is back to challenging for individual awards whilst helping her team win the highest of honours. But this has got many thinking, why? But first, let’s have a look at Kim Little’s star-studded career. Also, just a quick note that due to how long her career is, this is gonna be a long article. So strap yourself in, and get ready for the ride.

Kim Little joined Buchan Girls at the start of the century at the age of 10. She must have been good, as Hibernian took her on when she turned 14 and stayed in their youth team until she turned 16.

Little made her debut during a Champions League match (then the UEFA Women’s Cup) against Espanyol on August 8th, 2006. She joined the senior side to replace some experienced veterans who had left the club that summer. Unbelievably, in her SWPL debut, she scored a hattrick against Hutchison Vale. In her 2 years at Hibs, she helped the team win an SWPL championship title, the Scottish Cup, and the Premier League Cup. Her goal ratio was an exceptional 1.83.

FROM ALMONDS TO MEADOWS

After she impressed at Hibernian, Little joined the then Champions League winners, Arsenal. Her first goal for the Gunners didn’t come at Meadow Park, but instead the Emirates Stadium, where she scored in a 4-1 win against Chelsea. Following the match, then manager and founder Vik Akers told reporters to, “Make a note of this kid, she’s going to be a big player.” In her first full season, she scored 24 goals to help Arsenal win the league, with the Gunners almost matching the Invincibles achievement that the men’s team achieved 5 years prior. They lost 1 game that season, and only drew 1 (winning 20) but comfortably won the league. In her last Premier League season, she scored 17 goals, with Arsenal matching their record from last season (20-1-1). The departure of cult hero Kelly Smith didn’t impact the club that heavily, and that was due to Kim Little’s talent.

In 2011, Kim Little stayed with Arsenal in the newly founded Women’s Super League. She came second in the goalscoring charts with 9 goals in 12 games. Arsenal lost an extra game and drew 1 more, but still won the league. After the FA Cup Final, Little received the player of the match award and scored the opening goal as the Gunners beat Bristol City 2-0. After the match, manager Laura Harvey provided the understatement of the year, after calling Kim “world class”. In 2012, Little regained her spot at the top, after scoring 11 goals. They finally achieved their unbeaten record, with an unbeaten 10-4-0 record, and collected their ninth consecutive top-flight title, with Kim Little and Kelly Smith mainly to thank in the attack. The 2013 season wasn’t Arsenal’s finest, as Laura Harvey left for Seattle Reign. New manager Shelley Kerr couldn’t guide Arsenal to the pinnacle which is 10 titles in a row, as the Gunners slumped to third. That proved to be her last season with Arsenal, as she moved to Reign to reunite with former manager Laura Harvey.

Kim Little joined Seattle Reign after manager Laura Harvey made her the top transfer target for them. She secured her, and after signing, she said, “Kim is world-class. Her talent and proven experience will be a huge asset for our team in the coming seasons. Having coached Kim for nearly four years, I have no doubt that her creativity and goal-scoring ability will prove an exciting proposition for the NWSL.” During her first appearance, she scored a brace which helped them beat the Boston Breakers 3-0. Kim Little became the first player in NWSL history to receive the Player of the Month trophy twice after she collected it in April and then subsequently in May. Kim not only broke the record for the 2 POTM’s but smashed it, after receiving a third in July. She matched Abby Wambach’s record as she scored five goals in five matches. Kim Little scored 16 goals in her opening season and was voted the league MVP. However, Nadine Keßler beat her to the FIFA Best Player Award, and somehow didn’t even get onto the podium.

Little set sail on another elite league, after tearing apart the NWSL, WSL, WPL, and SWPL. She joined the W-League (now called the A-League Women), with Melbourne City on loan. Reign teammate Jess Fishlock came with her, and the duo continued to fire for City. She helped Melbourne achieve a season without dropping a point, with an 8-0-0 record. They won both the regular season and the Grand Final. However, unlike Jess Fishlock, she didn’t extend her loan, saying that her time in the W-League was “a one-year thing for me”. She collected another Grand Final POTM, and also scored 9 goals in her 12 games.

After her loan, Little returned to Reign and picked up for where she left off. She scored 10 goals, which put her second behind Crystal Dunn’s incredible 15. However, Kim also collected 7 assists, which put her first in that category. Seattle were once again defeated in the final by Kansas, but they did clinch the Shield. For the 2016 season, she had to become slightly more offensive, with the likes of Jess Fishlock, Megan Rapinoe, and Manon Melis all out injured. She delivered, with 3 goal contributions in the second match alone to win the match against Boston Breakers. She also scored the match-winner against Kansas, which got them another 3 points. However, the injuries hurt them, and they missed out narrowly on the playoffs, but the season showed that Little was a matchwinner.

Kim Little made another return, with the then 27-year-old joining Arsenal in October 2016, but didn’t play until May 2017 due to the Spring Series. In her first season, she collected 4 goal contributions in 9 games, which isn’t so bad. However, she got back to her old self, with 14 goal contribs in 14 games, which helped Arsenal get back their coveted WSL title. She then suffered a fracture to her fibula after a heavy tackle from Drew Spence, but she still received that amazing record. Little then got back-to-back seasons with 7 goal contributions in 12 and 16 games respectively, and you could see that she didn’t need to attack as much, and that was thanks to Vivianne Miedema. But this season, Little has stepped up to the plate, so finally, why?

This one obviously makes sense and sure, it is the reason why she scores so much. But you can’t just say penalties are the reason why she’s been so good. She’s performed at a level that is outstanding and has attempted skills and dribbles that made people stand up from their seats and made the world pay attention to her, so this is yes and no.

In her 2 seasons off, they have both been COVID seasons. In an Islington Gazette interview, she said, “There’s nothing we can even compare it to, so it’s certainly been interesting and challenging at times, but I think it also just emphasises how adaptable we all are when circumstances change.” So this could be it, but it’s unlikely.

I think this is the one. Eidevall’s attacking and high pressing football has made Arsenal be able to keep the ball in the midfield and attacking areas, which is where Kim Little operates. She is a beautifully technical footballer and has had more opportunities to show that this season.

THE FUTURE FOR KIM?

Kim Little will be able to sustain this. She’s Kim Little for crying out loud. It says a lot about her when I’m saying that a 0.5 goal contribution ratio is subpar. Kim Little is a brilliant footballer, and that isn’t said enough. She’s left a mark on the women’s game forever. After quitting international duty with Scotland, many thought that she was winding down her incredible 15-year career to a close. However, you don’t get of Kim that quickly. She has started thinking about a career away from football, but planning things doesn’t mean that you’re thinking about retiring, and Kim Little certainly shouldn’t anytime soon.