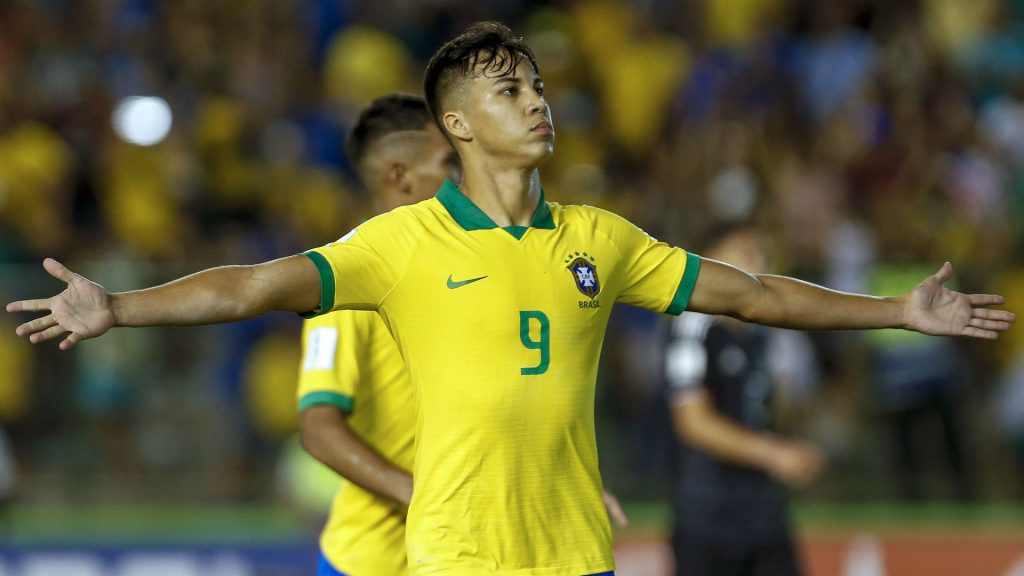 Chelsea have had a history of procuring young talents from around the world and helping them develop their youth careers in their famous Cobham Academy, who today, represent the Chelsea first team. Last season, they secured the services of Dutch youngster, Xavier Mbuyamba from Barcelona and it told you the kind of team Chelsea were building for the future decade.

Kaio Jorge, Brazilian club Santos sensation is next on Chelsea’s transfer list, as his performances for the Sao Paulo based club have been mesmerizing in recent times and Chelsea do not want to waste any time in bringing the youngster to Stamford Bridge.

Kaio Jorge is a 6ft center forward who can also operate as a playmaker or even as false nine or as a second striker. His qualities are very similar to that of Inter Milan forward, Lautaro Martinez, and fans of Santos F.C are certain that the boy is destined for greatness. In 2019, the Brazilian starlet featured for the Selecao in the U-17 World cup, where he scored five goals including a crucial equalizer in the 84th minute which Brazil then went on to win 2-1. Jorge ended up being awarded the Bronze boot and since then his career has only gone upwards as he has been continuously linked with Chelsea and Arsenal.

WHY DO CHELSEA NEED KAIO JORGE?

Brazilians are one of the safest investments in the world in terms of footballing talents with the likes of Gabriel Jesus, Roberto Firmino, Ramires, Phillipe Coutinho, and several others making it big in the Premier League in the past decade. Chelsea have their history of Brazilian talents with players like Alex, Ramires, Oscar, Jullian Belletti, David Luiz, Willian, Felipe Luis, and now Thiago Silva – all having featured for the Blues in addition to the fact that most of them have also won the Premier League with Chelsea.

Kaio Jorge will provide the Blues with a long-term deputy for any current Chelsea striker while he can also develop under Thomas Tuchel who is the infamous reason for Christian Pulisic and Ousmane Dembele reaching the heights they have today at Europe’s top clubs. Kaio Jorge can be the next teenage sensation under Tuchel in this fairly young Chelsea squad. While Chelsea may not find an immediate place for him in their squad, there might be an offload of players in the summer and Jorge can be one of the long-term acquisitions Chelsea can opt for in the transfer market.

Jorge currently already plays in a similar style that Tuchel’s team operates in, as he prefers playing the ball on the ground while he also likes to find spaces in between the midfield and defensive zones. This would be a huge bonus for Thomas Tuchel, who would not have to explain or make Jorge the way he wants him to play as he is already familiar with this set-up.

While two Premier Clubs including Chelsea have already contacted the players’ agent, if Chelsea secure Champions League football this term, it would become very hard for the youngster to refuse an offer from the London club.

North London Derby: Three players who stepped up for Arsenal
Josh Benson: Burnley’s Youngster impressing on the field
To Top