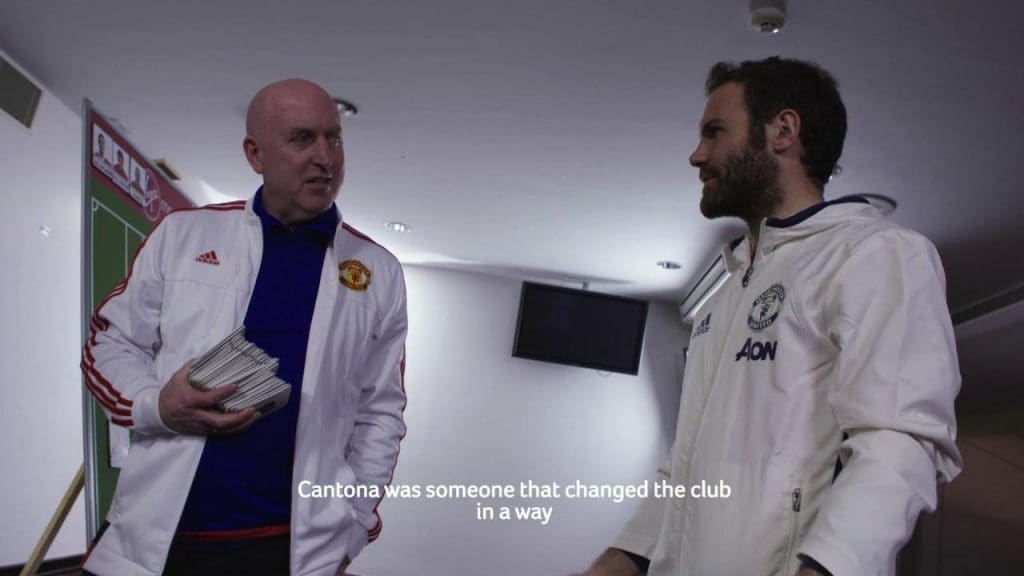 Manchester United midfielder Juan Mata has revealed about his special relationship with United legend Eric Cantona. Despite the midfielder being a shy person and Cantona being more vocal and enigmatic, the duo has been able to form a good friendship.

Mata and Cantona met for the first time early in January 2019 for the Common Goal initiative. Mata revealed that Cantona was a special player for him in his childhood days and that the former United star was a ‘special character’.

“Eric Cantona has always been a very special player for me since I was a kid,” the Spaniard told MUTV. “I remember him being an artist on the pitch and scoring these great goals and providing amazing assists for his team-mates. He scored some important goals, like the one against Liverpool in the FA Cup final.

“Also the celebrations and the aura that was around him. He certainly was, and is a special character.”

Mata was also given the opportunity to pick shows to be telecasted on Manchester United TV and Eric Cantona’s documentary ‘Eric Cantona: Reflections of an Artist’ was one among the six shows he picked to watch in his one day take over. Mata revealed that he picked this documentary because of his good friendship with the Frenchman.

“I have to pick this because of these reasons, and because, when I came to Manchester, I met him,” Mata explained.

“We have a great relationship; he’s a really nice person.

“I actually met Eric because he joined the Common Goal movement. He was our first mentor at Common Goal. We had some time together, we had lunch and it was a very nice experience for me.

“I remember him as a player, so being with him, and sharing this moment with me, it was very precious for me. I choose him for what he was on the pitch and his personality and aura outside of the pitch.

“When you have lunch with him, you feel that he is a different character. His life – because of his experiences at Manchester United and elsewhere – it’s just a special life and he has a special personality.

“He was funny and very calm when we met. We spoke about football nowadays and how it has changed and things like that. He’s also an artist. After football, he has become an actor. He actually wrote some books and drew a few drawings in a notebook that after, he published. He also reads a lot. He likes his philosophy and he’s a very interesting character. That’s how I felt he was when we met.”

Mata has spent six seasons with United so far since joining the Red Devils in 2014 from Chelsea. Next season is his last year according to his current contract. He has made over 250 appearances for United and has scored 48 goals. Cantona spent five seasons with the Red Devils and made 185 appearances for the club scoring 82 goals in the process. He retired at the age of 30 in 1997.