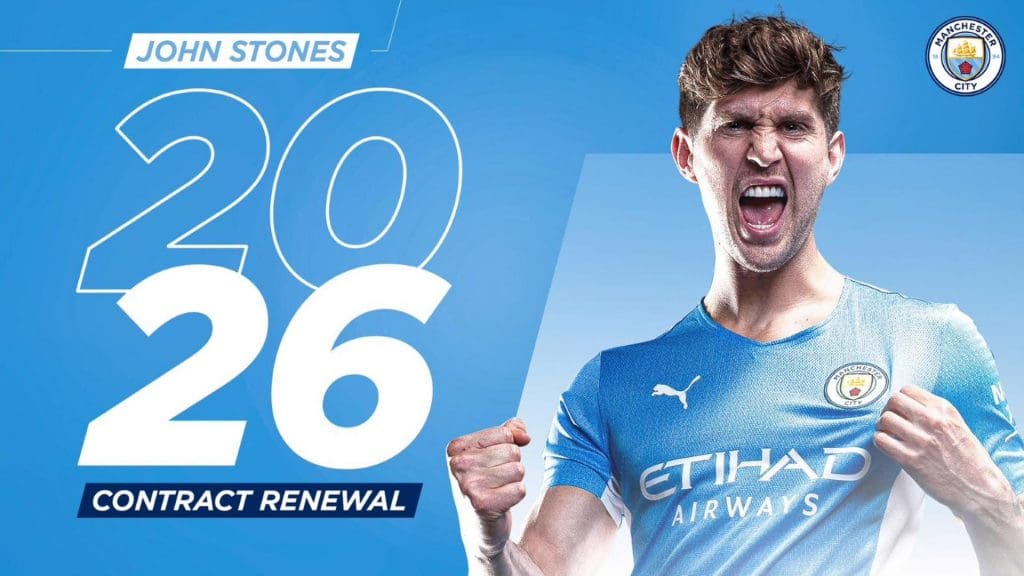 John Stones has signed a new long-term deal with Manchester City, as he put pen on paper to a deal that will make him one of the highest-paid defenders in the league.

Since making the switch to Manchester from Everton in 2016, it has not always been a success story for the English defender – but he has overcome obstacles and criticism to be an integral cog of Pep Guardiola’s system as well as one of the best defenders in the country and a regular for the national team.

Already having established himself as one of the best young defenders in England, John Stones joined Manchester City for a fee of £47.5m plus add-ons. He was one of the first signings of the Pep Guardiola era, but Stones could hardly impress with his performances in his first season at the Etihad Stadium.

Stones was infamously awful against Leicester City as he was put to the cleaners by Jamie Vardy in a 4-1 loss to the Champions at the King Power Stadium, while a 4-0 loss against his former team at Goodison Park was the lowest point in his underwhelming first season – but there was a change of fortune in store for him.

An overhaul in the summer of 2017 saw Stones being paired up with Nicólas Otamendi in the heart of the Manchester City defence, in a record-breaking season that saw City win the Premier League and finish the season with a hundred points.

John Stones was influential as City were the runaway winners in what was Guardiola’s first Premier League title win, and he only backed up his incredible performances in the following season – in what was a second successive league win.

He was then paired up with new signing Aymeric Laporte as Manchester City aimed to chase down Liverpool who had the lead in the title race at Christmas. When the top two teams collided in January 2019, Stones put on a Man of the Match performance as City defeated Liverpool 2-1 in a potential title decider.

The English defender was also involved in the moment of the match as he cleared a genuine goal off the line while the score was goalless – Mané’s shot hit the post and Stones’ initial clearance hit Ederson and almost crossed the goal line before Stones cleared the danger from half a yard out. City went on to win the match 2-1, as well as the Premier League title for the second year running.

The 2019/20 season was one of the more prominent lows of Stones’ Manchester City career, as he struggled with form throughout the season – and became an outcast by the end of the season. Stones was replaced by Éric García in the team that lost the Champions League quarter-final to Lyon, and City could not retain the Premier League title as well – losing it to Liverpool.

But Stones showed immense character and ability to bounce back again, as the best season of his City career judging by performance and influence was yet to come. He was immaculate alongside City’s new signing Rúben Dias as they looked to impose a stronghold on the Premier League from the very beginning of the 2020/21 season.

Not only was John Stones a part of the team with the best defensive record in the league, but his statistics from last season suggest that he has been one of the best centre-backs not just in the league – but in Europe as well.

John Stones is an excellent passer as well as a progressor of the ball, as testified by his much superior ball-playing statistics in comparison to his positional peers in the top five European leagues. When compared to centre-backs in the top five European leagues, Stones ranks in the 94th percentile for passes completed per 90 minutes, (78.27) and in the 99th percentile for pass success rate – completing 94.6% of his passes per 90 minutes.

Besides his brilliant passing range, Stones’ excellent ball progressing ability is also very important to the way that City plays out from the back – Stones ranks in the 99th percentile for progressive carries with 8.47 carries per 90 minutes.

While his defensive numbers are not as good when compared to his peers in Europe, it can be attributed to the fact that Guardiola’s City barely have to defend against most teams. In his five years at City so far, Stones has become the perfect Guardiola centre-back – adept at passing with either foot and competent in a high line.

As a result of his brilliant form, City won the Premier League title for the third time in four seasons – and went close to continental glory as well, falling short in the final hurdle of the Champions League to Chelsea. Stones ended up on the losing side in the EURO 2020 final as well, but that does not take anything away from the brilliant season that he had for both club and country.

Now twenty-six and already having played for City for five years, Stones is one of the more senior members of Pep Guardiola’s squad – and he was rewarded for his performances with a new deal that will see him earn close to £250,000 per week.

John Stones has gone from a Man City outcast to one of the more outstanding players in their star-studded squad, and it would be quite a safe wager to say that his best years at Manchester City are ahead of him.