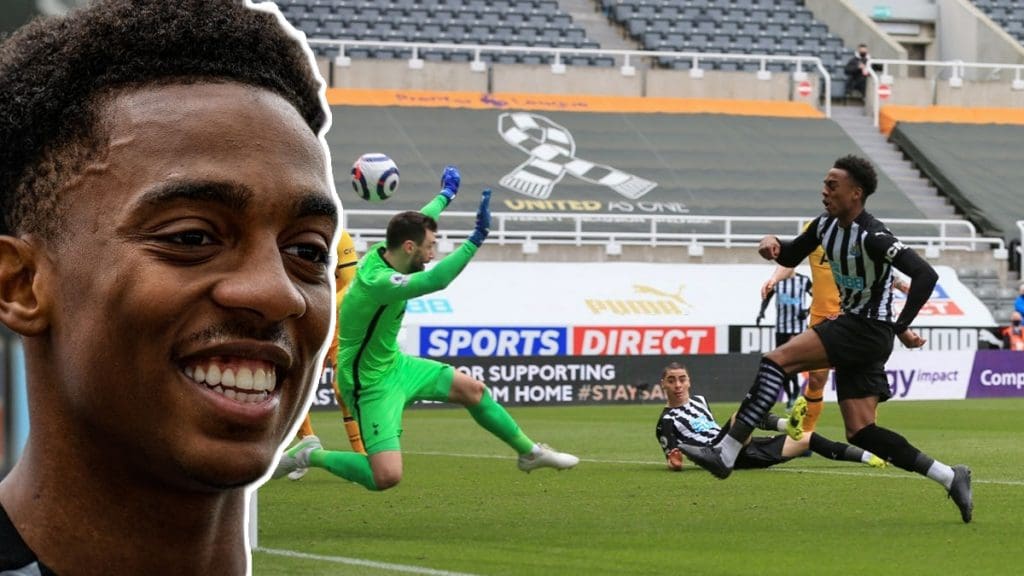 Newcastle United are probably one of the luckiest teams this season to fend off relegation, however, if you work hard enough, you deserve some luck to come your way.

One of the hardest-working members of Steve Bruce’s squad since January has been Arsenal loanee, Joe Willock.

Arsenal have had a really good crop of youngsters come through their ranks in the past 4 years and one of the brightest players to come out of them was Joe Willock.

The midfielder started playing regularly for the Gunners senior squad last season as he racked up 44 appearances while also scoring 5 goals and providing an assist in that period.

While things didn’t go as planned for the Arsenal youngster this season, Willock started most of Arsenal Europa League group stage games while also featuring a lot of times in January for the Gunners. However, most of them were off the bench and the midfielder could not impact the game courtesy of which Willock believed that if he wanted some serious game-time he will have to consider a loan move.

Willock got his wish in January as the 21-year-old joined Newcastle United on loan on deadline day.

While Willock had a slow start as he adjusted to the team and Steve Bruce’s ideology, the midfielder is now impacting the game the way he thought he always could. So it would be interesting to see what has changed for the midfielder since he made the move to the Magpies.

A midfielder by trade, Joe Willock has deputized across the pitch for Newcastle United this season as the midfielder but it is his contributions in the center of the pitch that have increased and are now benefitting Newcastle in fending off relegation this season.

Joe Willock is now averaging 2 to 3 long balls a game as compared to only 1 long ball while playing for the Gunners. The midfielder, moreover, roams around with much more freedom while also contributing actively in set pieces this season.

Willock has always been a great header of the ball as Newcastle witnessed on the weekend with the midfielder heading home the winner against a stubborn West Ham defence.

The 21-year-old is also dribbling past opponents with much more ease at Newcastle as the midfielder has averaged 2 to 3 successful dribbles, 2nd most at the club after Allan Saint-Maximin.

Jonjo Shelvey has also played a huge role in the development of the youngster as the 29-year old provides enough cover in midfield for Willock to wander in empty spaces and create chances for his teammates.

To showcase how Willock has changed his game, it is necessary to look at the midfielder’s positional play. At Arsenal, Willock was often forced off on the wings because of which the youngster was completing 3 to 4 crosses a game. Now, however, things have changed with the Magpies as Willock plays much more centrally and is proving to be much more effective from that position. Willock’s crossing numbers have also declined due to playing more centrally.

The huge difference now is that Willock finds space inside the penalty box to be at the end of crosses rather than out on the wings delivering them. Moreover, playing centrally has also facilitated Joe Willock to help the team not just going forward but also defensively. The midfielder is completing 2.1 interceptions per 90 at Newcastle as opposed to 0.5 at Arsenal. This statistic has improved because Willock is a much more feisty character in central midfield and can intercept dangerous through balls, something opposition teams have tried continuously against Newcastle this season.

Moreover, the 21-year-old is also averaging 4 aerial duels per 90 minutes for Newcastle, which is twice as much what the midfielder was averaging at Arsenal.

License to roam, aggressiveness in defending, finding spaces in the box- Joe Willock is doing all the right things and developing as an excellent box to box midfielder for the Magpies this season. The 21-year-old is justifying his move to Newcastle in February with Steve Bruce claiming that he wants to build the club around the youngster if given the opportunity.

Steve Bruce, who has been delighted with the midfielder’s development wants to keep the youngster at the club beyond the summer, however, that is easier said than done.

Joe Willock’s current contract with Arsenal expires in June 2023 and if Newcastle want the midfielder, it is not going to be a cheap deal as Arsenal will demand upward of £15 million for the 21-year-old.

While there have been no talks as of yet, Joe Willock needs to continue to provide consistent performances if he wants to play a starting role at a Premier League next season.