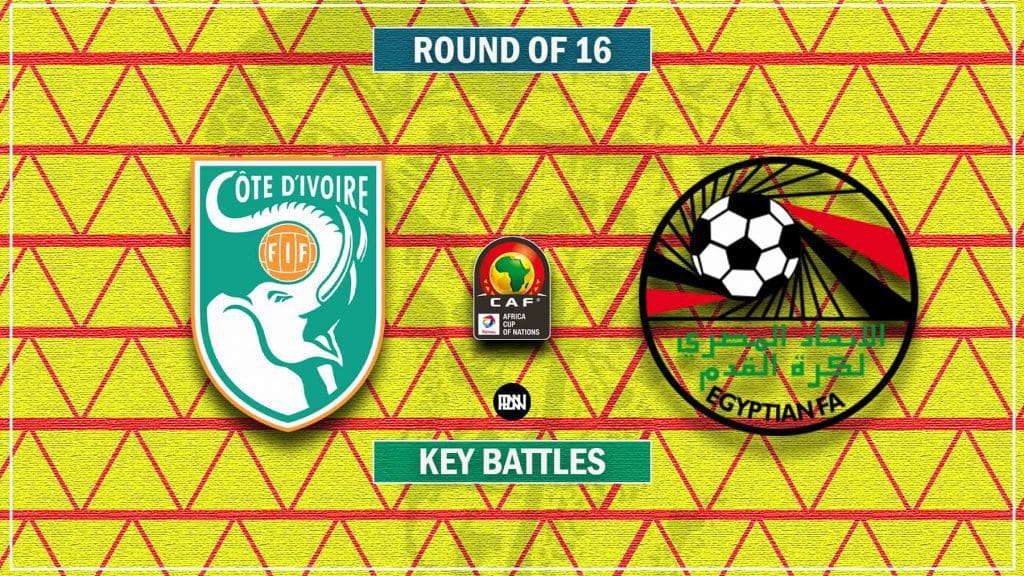 Egypt are not so far off their best on the continental tournament but they will need some impressive loads of work when they come up against Ivory Coast in the round of 16 of the ongoing Africa Cup of Nations.

The game will see the Pharaohs’ resilience in defence being tested by one of the prolific attacks in the competition in Cameroon, considering Ivory Coast have scored six goals in three games so far.

Knowing what is at stake for both teams, Premier League News Now takes a look at battles from the game that could help either of the sides end up on the winning side at the end of the contest at the Japoma Stadium.

Wilfried Zaha played his best game of the competition in the draw with Sierra Leone, providing the assist for Sebastien Haller’s first AFCON goal. The Crystal Palace forward has started just one game in the tournament but his cameo against Algeria should be enough to get him a starting spot against Egypt. Zaha’s trickery and nibble footwork will definitely be a problem for Omar Kamal should the winger be in the starting line-up.

Kamal after not playing a part in the loss to Nigeria has been involved in the last two games. His defensive performances contributed to Egypt’s two clean sheets and the gaffer is likely to keep him in the team especially against a side that have the quality in their attack. The Future FC versatile midfielder averages 4.0 tackles per game and 1.5 interceptions per 90 minutes. He will be important to keeping Egypt’s right side of defenceless busy.

Sebastien Haller may now be settling into the fold on the African scene as compared to his exploits with Ajax Amsterdam. The UEFA Champions League top-scorer has been involved in two goals in three games in the AFCON, scoring one and assisting the other. After failing to hit a shot on target in the first game, Haller scored the only shot he took in the game against Sierra Leone. Ivory Coast needs him to be active if they are to overcome Egypt.

Coming up against Haller will be Ahmed Hegazy. A giant for opposition strikers to deal with, the central defender will obviously be a problem for the forward due to the physicality he adds to his game. Hegazy may have struggled outside the national team but he has always been one of Egypt’s top performers when he dons the national team jersey.

A tale of two strong goalkeepers in the competition will also be on display. Badra Ali Sangare has one clean sheet compared to Mohamed El-Shenawy’s two. Both keepers have made some crucial saves for their sides in the previous games but they come up against each other at the Japoma Stadium.

Never rule out the quality of these two shot-stoppers but a weaker defence could see them fail to cope with the pressure the game could bring.  Sangare makes 2.3 saves per game in the competition which constitutes 70% of the shots he faces but El-Shenawy manages 2.7 (89% of shots faced).

With these numbers coming up in the same game, good luck to all attackers looking to make the headlines.

Rated by ‘Who Scored’ as one of the top three performing left-backs in the French Ligue 1, Ghislain Konan could be facing his biggest opponent yet in the Africa Cup of Nations. The full-back will come up against Mohamed Salah in Wednesday’s encounter with a place in the last eight up for grabs. The only game Konan failed to impress was against Sierra Leone, as his side were held to a stalemate.

Salah on the other hand have a greater responsibility to lead his team into the quarter-final of the competition. The Liverpool man is struggling to have the same impact he has had for his club over the last three seasons in the Egypt team in Cameroon. He has only found the back of the net on one occasion and has been far from convincing anytime he has not been on the scoresheet. Hopefully, Egypt can get him playing his best football in midweek.

Mali vs Equatorial Guinea: 3 Key Clashes to look forward to | AFCON 2021
Chelsea’s Defensive Revamp! Who might Leave?
To Top