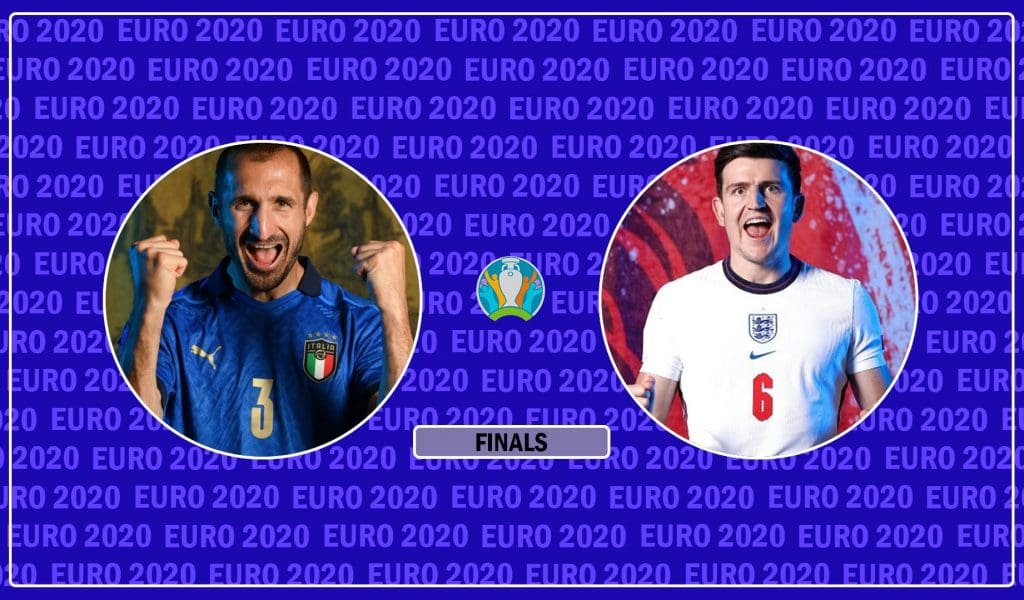 England and Italy have qualified to the final of this edition’s European Championship after giving us 2 spectacular semifinals. This will be England’s chance to finally bring football home as they face Roberto Mancini’s Italy in the mighty Wembley Stadium or it could be Azzuri’s turn to silence the English crowd on their own soil.

Roberto Mancini has completely changed the shape of Italy’s performance. Italy were never considered as favorites in this competition but nobody saw them as underdogs. Considered as dark horses since the beginning, Azzuri have lived up to their tag. They beat quality opponents in Austria, no.1 ranked Belgium and tournament favorites Spain on their journey towards the final. Their defense has been their key strength in this tournament as the veteran defenders Bonucci and Chiellini are yet to concede more than one goal in a single match.

Italy forwards Chiesa and Insigne have been in good form and will look to silence the English crowd with tailor-made Italian passion.

England, on the other hand, beat Denmark with Harry Kane scoring a tap-in to send The Three Lions into their 1st final appearance in Euro history. On the previous night, Italy knocked Spain out on penalties to earn their spot in the Euro 2020 final.

Since their 1966 FIFA World Cup triumph, England have been knocked out of all their tournaments without reaching a final. In their route to the Euro 2020 final, England have beat Germany, Ukraine, and Denmark on their way. Harry Kane has scored in all his last 3 games, which could give him a boost when he comes up against legendary defensive duo Chiellini and Bonucci. Gareth Southgate will have high hopes from in-form Raheem Sterling and so will each person in England. It remains likely to be seen if Gareth Southgate and his young English manage to beat Italy to lift the trophy in front of their home crowd.

As both managers suit up for a tactical war on the sidelines, this Peaky Blinders vs Luca Changretta face-off will surely be a treat to the audience’s eyes.

The Final will take place on England’s home ground Wembley Stadium in London on Sunday that is 11 July 2021 at sharp 8pm BST.

England and Italy have competed on the pitch 27 times and Italy have the upper hand of coming out as a winner 11 times compared to England’s 8 victories, and both teams share 8 draws among themselves.

Their last meeting recorded a 1-1 draw, that was in a friendly they played in 2018. Since then, both teams have come a long way to this date.

One of the best centre-backs on the planet, the veteran defender will do everything he can to save his country’s pride against their mighty foe England. His partnership with Bonucci is probably the best old-school centre-back partnership in world football today. This could be his last match in Italy’s shirt, and he will try to defend his goal like his lives at stake.

The Italian defender was troubled by Doku’s pace when he faced Belgium in the quarter-final. Gareth Southgate will assign the pacy duo Saka and Sterling to cause all the troubles for the Italian defender and how will Chiellini hold his ground against them will be a question the Italian must be thinking right now. Impressing in the group stages by keeping consecutive clean sheets and handling the danger from the likes of Romelu Lukaku and Gerard Moreno in his build-up to the final, Chiellini’s face-off against PL top scorer Harry Kane will be a delight to watch for a neutral.

As the most trusted soldier of Mancini, he will have the weight of all Italians rooting for the Azzurri’s win on the coming Sunday at Wembley Stadium.

It was tough to choose one specific player from England’s camp as the whole squad has been performing brilliantly in this tournament. Well, Harry Kane has been an integral part of their success so far in this competition. He has scored in 3 consecutive games and his partnership with fellow attackers Raheem Sterling and Bukayo Saka has been praiseworthy throughout the knockout stages.

Harry Kane’s creative abilities have not gone unnoticed, as he reminded everyone after he crossed the ball resulting in an own goal from Denmark. His ability to drop deep and create chances that jump over the opposition’s defense could come useful against Italy’s wall of defense. His eye for goal and finishing ability will be tested against the new PSG signing and Italy’s new No. 1 Gianluigi Donnarumma, who appears to be a great shot-stopper.

Donnarumma is unshakable at the moment, and this moment may very well last for the next decade. Roberto Mancini won’t surprise us by changing his tactics and may stick with the same lineup.

Di Lorenzo and Emerson have been really impressive throughout the knockouts and the latter will replace injured Spinazzola for the final while the former has done enough to start ahead of Florenzi. Centre-backs Chiellini and Bonucci are guaranteed starters for Roberto Mancini’s Italy.

Nico Barella and Marco Verrati’s tireless running and abilities to hold the possession along with creativity will be crucial in Mancini’s plans to supply passes to his forwards. Jorginho has been unreal the whole tournament, his composure is second to none at the moment and his penalty against Spain proves it.

Insigne has been in amazing form and his fellow wingman Chiesa has been impressing football pundits for the entirety of last season. His goal against Spain guarantees him a start. Lazio Striker Immobile hasn’t fired up yet but his ability to perform for important moments like this cannot be ignored despite the rumors of starting Belotti and moving Insigne to false 9. Belotti could be used as an impact sub when Italians will need to speed up their ball progression, he is the best man to call upon.

Southgate preferred to play with back 4 against Denmark as opposed to a back 3 system he used against Germany. Englishman may have a similar decision for the final.

He is expected to keep the winning squad when he lines up for the final at Wembley. Pickford will be doing the duties to avoid the ball entering his goal. To protect the goalkeeper, Harry Maguire will be partnered with very dependable John Stones. Kyle Walker and Luke Shaw are expected to provide defensive width and overlapping runs.

Midfield trio of Declan Rice, Kalvin Phillips, and Mason Mount have worked well for Southgate due to the trio’s ability to work hard off the ball.

England’s attack is looking sharper than ever as the captain Harry Kane will lead from the front accompanied by his comrades Raheem Sterling and Arsenal’s Bukayo Saka.

Jack Grealish, Phil Foden could start on the bench to provide attacking options when the situation calls. Gareth Southgate will rely on Jordan Henderson to throw him in the shuffle if England will need to see out the game.

Roberto Mancini will have to leave left-wingback Spinazzola out of the lineup due to his injury. Florenzi has returned to his full fitness. Rest of the players are fine as always.

Suspended: None.
Doubtful: None.
Injured: Spinazzola.

Gareth Southgate doesn’t have to worry about any injury or suspension as he has all the players fit and match ready at his disposal. Aston Villa captain Jack Grealish was substituted in the extra time, but the manager confirmed it as a tactical change rather than an injury.

Suspended: None.
Doubtful: None.
Injured: None.

Last time England played a final at Wembley in 1966, it resulted in England’s victory. This is 2021 and they have the support of 40,000 English fans in the stands while only 1000 Italian fans will be present in the stadium. Despite the psychological disadvantage, the Italian players are unbeaten in their last 33 games, which means the result will be tough to predict.

Difficult to predict, as much as I want it to come home, it really looks difficult to beat Italy as of now, but England may come on top by a slim victory.