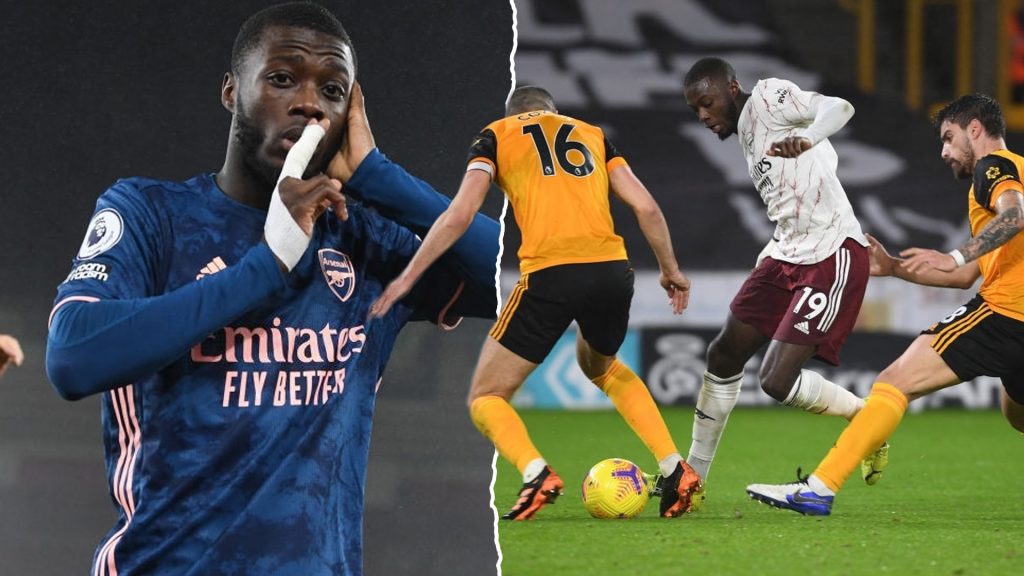 In the game against Wolves, we all witnessed Nicolas Pepe that we signed for. Although the winger was not playing in his preferred right side, he was absolutely miraculous on the left flank. His game exhibition Wolves was class-apart and the finest amongst 22 of those on the field.

Nicolas Pepe, however, has played the majority of his career in the right-wing, wholly and solely because of his strong left foot. But, in spite of him being a left-footed winger, some of his recent sumptuous performances have come from the left with the Frenchman displaying brilliance with the weaker foot.

The young winger has used the change of flanks in the last few games to flip the narrative on one of the biggest bugbears of his game – scoring goals. He has often been guilty of failing to convert chances which were evident for a long part of last season and the start of this one. However, that problem seems to be finally working with a change in position.

Deploying Pepe on the left also negates the idea of predictability. The Frenchman from the left can be a secret weapon who may easily mask the defenders with his skills. In that position, he will be able to make crosses while on the run and will not have to change his posture, cease his run and then provide a cross, as he has to from the right.

Also, Pepe can easily exploit spaces on the left and when Tierney comes into the squad in the left-flank, the force will be doubled. Both the players possess brilliant skill-set, have the agility and game sense required to play a pacy football. Arteta would love to see both these youngsters work in tandem and create open spaces for his strikers from the left.

Despite the advantages of deploying Pepe on the left, taking a call on his position will not be easy for Arteta.

The manager already has Aubameyang in the left flank who arguably is Arsenal’s prime guy in that position. The Gabon international seems to be much more involved from the flank than anyone else and Arteta can use him in that position more often if he fancies starting Martinelli or Lacazette as a number 9. Auba’s ability to drift in the center and find a pocket of space gives him the nod to start from the left.

MUST READ: Is Hector Bellerin Underappreciated?

As a winger, Pepe’s presence only makes sense if he is able to create chances for the team which he will only be able to do with his strong foot i.e from the left-wing. Having him on the left completely surges his ability to create chances, make crosses, and make overlapping runs. Therefore deploying Pepe on the left seems nothing less than a prestige.

The Frenchman has proved his mettle by confirming Arteta of his versatility which has given the latter options to play within the attacking front. It will be hard for Pepe to regain the left flank after Auba’s arrival, but what he has done in Gabon’s absence is commendable and good for Arsenal’s future.

Pepe’s right foot still needs to be nurtured. If the game against Wolves is an indicator, the winger has worked immensely hard on his weaker foot and has been successful in making it stronger.

Either flank should work for Pepe but seeing him on the left is a treat because of the goals he gets from that position. If he continues to play on the left we may see him as a prolific scorer and not a chance creator, however on the right-hand side, his role would be more of a winger creating chances for his team.