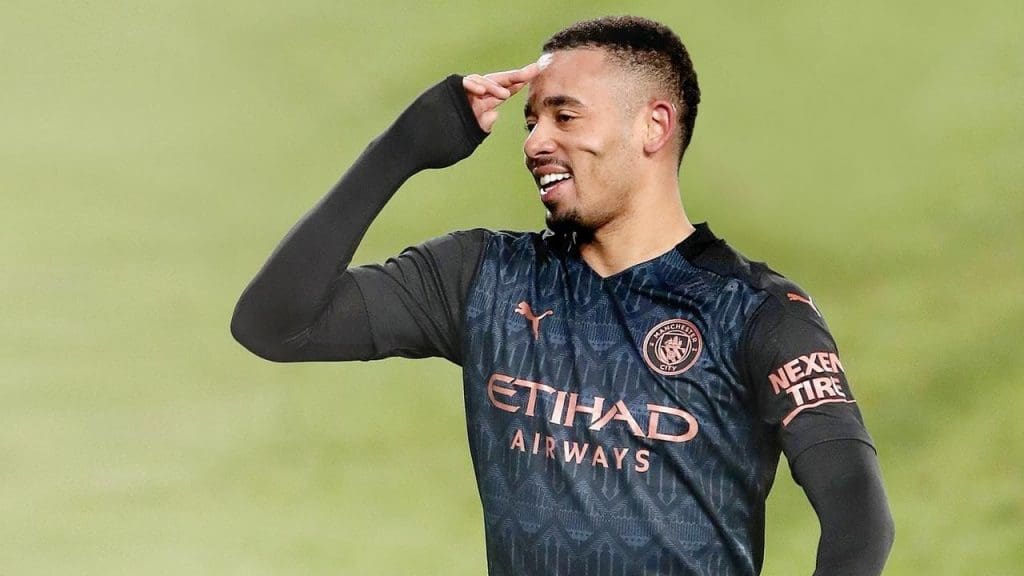 Gabriel Jesus arrived in January 2017 at Manchester City and big things were expected out of Jesus, who was named player of the year in 2016 of Brasileiro Serie A, as helped his team, Palmeiras, win their first national league title after 22 years. There were no surprises as the boy from Brazil delivered as Jesus only started 10 games in the 16/17 season for Manchester City and yet managed to have 11 goal involvements, a huge achievement for a 19-year-old newcomer to the Premier League.

Pep Guardiola had always planned for Gabriel Jesus to be the heir to Sergio Aguero, Manchester City’s talismanic striker for the past decade, and for a while, he also played the two of them on the same pitch together in a two-striker formation. In a lot of ways, Aguero and Jesus are very similar. The duo are of a similar height and build and are exceptionally good at holding on to the ball and dribbling past opponents while they are also very good headers of the ball. Guardiola would have been very impressed with how easily the Brazilian caught the pace of the Premier League and was almost immediately effective.

As the 2017/18 season began, Pep Guardiola now had one year of experience of coaching in the Premier League, and he was all set to conquer England this season after Manchester City went out and splashed out on the best talent available in the market at the time in the form of Bernardo Silva, Benjamin Mendy, and Aymeric Laporte. City swept away the title that season and Gabriel Jesus was an integral part of that campaign. The Brazilian featured in 29 Premier League games, however the Brazilian only managed to start 19 of them and yet the Brazilian scored 13 goals and provided 3 assists to his team-mate.

What made Gabriel Jesus so good was his chemistry with his team-mates and also being in the right spaces at the right time to finish off chances in the penalty box. Apart from all this, Jesus is also a very creative player as the Brazilian comes to the half-line at times to contribute to the build-up play and to do layoffs off of either Kevin De Bruyne who would then find him with a through ball or Jesus would initiate a one-two-pass with either of his wingers or Sergio Aguero and then run into spaces which would indirectly create spaces for his team-mates. Gabriel Jesus also scored the winner on the final day of the 2017/18 season to clinch 100 points for Manchester City in the Premier League, as they became the only club to achieve this feat.

Gabriel Jesus is a lot of things but he is not a killer in the penalty box. Sergio Aguero for many years was a penalty box demon who haunted teams time and again and had the innate ability to convert even half-chances into goals. Gabriel Jesus might have the same tenacity as Aguero but he does not have the same dogged-nature as the Argentinian who would shrug off opponents for fun and would smash the ball into the back of the net. Gabriel Jesus, moreover, does not seem to be enjoying when he starts the game as a number 9, because he is more interested in bringing his team-mates into the game rather than being a penalty box striker for whom his team-mates can create chances for.

When you have players like Leroy Sane, Raheem Sterling, Gundogan, and Kevin De Bruyne, you don’t really need one more player to knit play, whereas the main need of the team is a killer striker who will finish off the chances in the 6-yard box. Gabriel Jesus is excellent when you need him to deputize for Aguero, but this situation only works because Manchester City always expects Aguero to be back.

It can also be said that Gabriel Jesus is excellent in games where Guardiola needs a striker but he uses them as a false nine as he did in his first tie against Real Madrid at the Bernabeu in the last 16 of the champions league last season. In such games, Gabriel Jesus can be very effective but these are one-off games, and moreover, the reason for City’s victory over the 2 legs was Kevin De Bruyne’s excellence in the midfield position. Gabriel Jesus probably had his best season last year, as he contributed to 21 goals in the Premier League campaign. However, he was not the club’s top goalscorer as Aguero scored 16 goals even though he played 10 matches lesser than the Brazilian, which tells you about the talisman’s quality. Aguero has hit the 20 goal mark in his career every time he has played more than 30 Premier League games for Manchester City and if Aguero were to leave City this summer, which looks highly likely, it will be a huge task to fill the 32-year-old’s boots.

Manchester City clearly believes that they need a proper number 9 next season and with Pep Guardiola staying at City for three more years after his contract extension last year, he would be aiming for more trophies, especially the Champions League which has so far eluded him as Manchester City Manager. Manchester City has made several inquires and has been constantly linked with the likes of Harry Kane, Romelu Lukaku, and Erling Haaland, which tells you that City are looking for something different in their striker this time around. City are clearly targeting a 30 goal striker who can boost their numbers in attack and their chances of winning the Champions League.

However, the one striker City has been tipped to go into strong for is Erling Haaland, who has been in stupendous form in the Bundesliga and the Champions League. Erling Haaland is deadly in front of the goal, he has an eye for a pass while he is an amazing header of the ball. Moreover, the Norwegian can cause lightning-fast counter-attacks which Ederson and City as a team are famous for. All of this and Haaland is only 20 years old. This tells you that City does not buy into Gabriel Jesus as their main striker for the coming years.

With City finding replacements for Sergio Aguero, it looks very hard to make a position for Gabriel Jesus in this Manchester City side. With City’s heavy fixture list, Jesus could feature in the Cup competitions but the Brazilian will certainly feel that he can earn himself a starting spot in other top teams in Europe. The future looks tricky for Gabriel Jesus, and only time will tell how long the Brazilian will remain at Manchester City.

What has gone wrong for Alexandre Lacazette at Arsenal with a move to A.S Monaco on the cards
With Chelsea’s pursuit of Erling Haaland does Tammy Abraham have a future at the club?
To Top