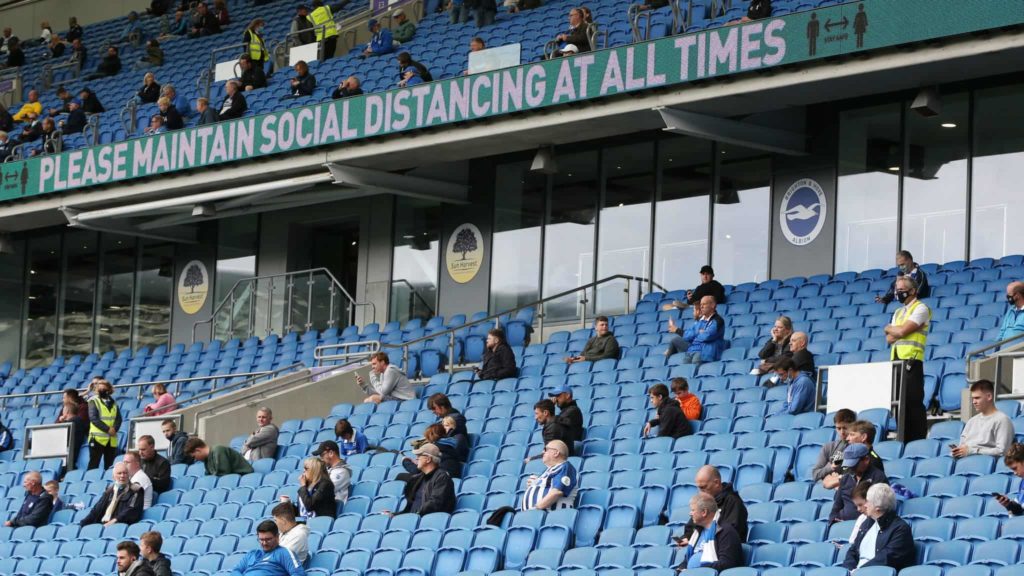 Football fans will be allowed back into the Stadiums albeit a very small number of fans will be able to attend games but like the managers and players have pointed out it is a step in a positive direction. With proper monitoring and precautionary measures, if all is well with this little experiment, more fans could be allowed to attend football matches by the turn of the year. After so many games without the supporters in the grounds backing their teams, there is finally a small light at the end of the Tunnel.

From When Can Fans Return?

From December 2nd when the Lockdown ends in the UK, the Government announced.

There are some caveats to Fans returning, the Number of Fans that will be allowed back is based on a Tier System. Clubs will only be allowed to have Fans based on the Tier that their Location is in.

Here is a Full Run-Down of the Tier System

Attendance at games limited to 50% of capacity or 4,000 (whichever is lower).

Adult sport can take place outdoors, but must follow the ‘rule of six’ indoors. Surprisingly none of the Premier League Clubs fall under Tier 1, meaning no Club can have 4000 fans in their Stands.

Attendance at games limited to 50% of capacity or 2,000 (whichever is lower).

Adult sport can take place outdoors, but cannot take place indoors if there is interaction between different households. Exactly 10 Premier League Clubs fall into the Tier 2 Category and will be allowed to have a Maximum of 2000 fans back for games.

Games to be played behind closed doors.

Adult sport can take place outdoors, but people must avoid higher risk contact activity. Indoor sport should not take place unless with your household or bubble. The other 10 Clubs in the Premier League are part of Tier 3 meaning they are situated in high risk regions where Covid-19 is acute, these Clubs cannot welcome back any Fans until further notice.

Who Can and Can’t Have Fans Back:

Arsenal, Brighton, Chelsea, Crystal Palace, Everton, Fulham, Liverpool, Southampton, Tottenham and West Ham, all fall under Tier 2 and will all be allowed to have 2000 Fans for home games, while the rest of the pack have to carry on without the supporters cheering them on.

Aston Villa, Burnley, Leeds United, Leicester City, Manchester City, Manchester United, Newcastle United, Sheffield United, Wolverhampton and West Brom are the Clubs in Tier 3 Regions & won’t be able to Welcome Back supporters just yet. Their wait to see their teams play will go on for a bit longer.

The impact of not having fans in the Stadiums has led to some astonishing results already in the Premier League this season, so what impact will their return have. Clubs at the bottom of the League will be desperate to get their fans back in the stands, they will need the voices of the fans to get them going this season and to pose any kind of trouble when going up against tougher oppositions.

Sadly, only two of the current bottom 6 will be able to get the fans back, with Sheffield, West Brom, and Burnley not allowed to have fans in the Stadiums. The wait for these teams goes on as they try to find some sort of form going up against some of the Bigger clubs in the League, with a tough December fixture list ahead of them.

Caoimhin Kelleher – Another start, after a good show? | Premier League 2020/21
Kido Taylor-Hart: The next big thing out of Hale End Academy
To Top