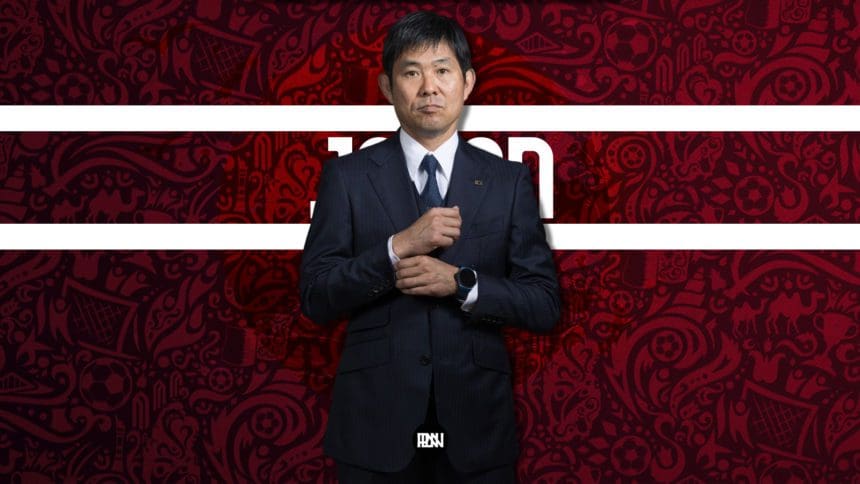 The 2022 World Cup has only witnessed one round, but the tournament has already included plenty of thrilling football action, some outstanding goals, and more significantly, the stories that the upsets have inspired. Herve Renard’s brave Saudi Arabian side stunned Lionel Messi’s Argentina, who were deemed the favorite to go all the way. The very next day, we witnessed another dramatic shock as Japan came back from a goal down to snatch the three points away from Germany.

These victories represent the quality on display, particularly from a tactical standpoint. Of course, Japan and Saudi Arabia had luck on their side, but they were ultimately rewarded for their game strategy. In fact, many forget that Japan were on its way to the quarterfinal of the 2018 World Cup when they led Belgium by two goals to nil before the star players stepped up and broke the Asian country’s hearts. This article, however, focuses on Japan’s tactical change that saw them match Germany toe to toe and achieve a historic victory.

Hansi Flick’s new-look German side play free-flowing and attacking football by getting numbers forward. With Niklas Sule starting ahead of Kehrer and Jonas Hoffman, it was clear the Germans were set to buildup in a 3-2 shape in the first line, with Sule as the third center-back. Kimmich and Gundogan usually hold the fort in midfield while David Raum advances high up the pitch to make it a front five. This has been Flick’s trademark approach during his Germany tenure with the double pivot controlling the tempo of the game.

Japan, meanwhile, started in a 4-4-2 shape out of possession and looked to control the half spaces on the edge of the box. However, this shape caused them problems as Germany were let to build up through Gundogan and Kimmich, who had time and distributed the ball with ease. Further, there was a 3v2 overload in the first line, so Germany were hardly troubled in possession.

Raum won the penalty, which Gundogan ultimately converted, but it was Die Mannschaft’s overload in the attack that provoked the penalty. Since there is a 3v2 overload, Sule receives the ball with no pressure, but as Japan’s left winger pushes forward, Thomas Muller drops wide from the half spaces to create numerical superiority in midfield. Kai Havertz also dropped deep from the number 9 position to receive the pass from Sule. Japan’s center half failed to track him since it could leave space in behind for Gnabry to attack. 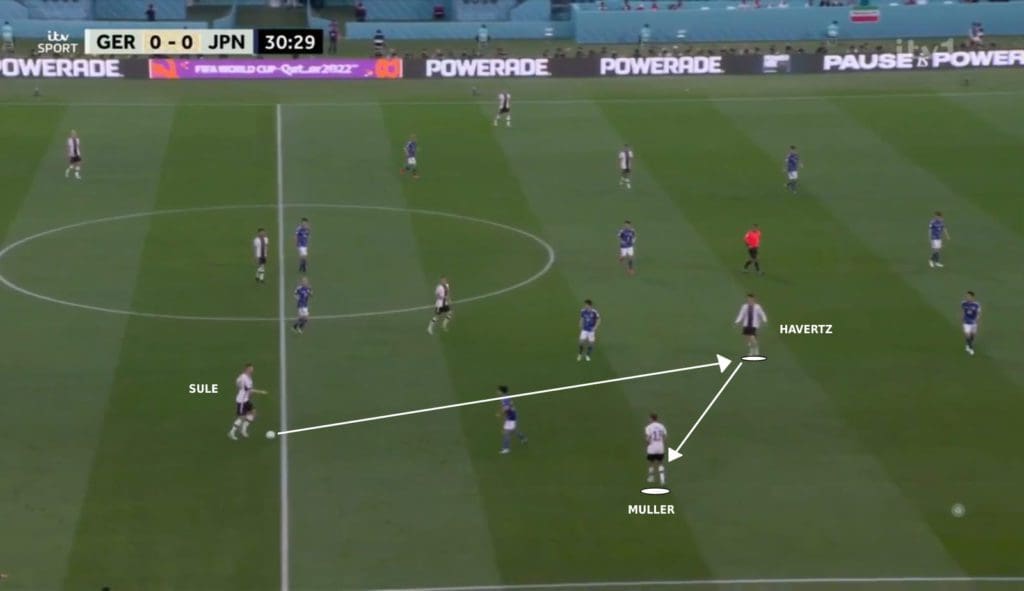 As Muller receives the pass and plays it centrally to Kimmich, Raum is already on his way to the box. Kimmich finds him in a huge space and the goalkeeper concedes a penalty. Flick’s side had numerical superiority all over the field (3v2 in defense, Muller moving wide from central areas, Raum pushing forward to create overloads). 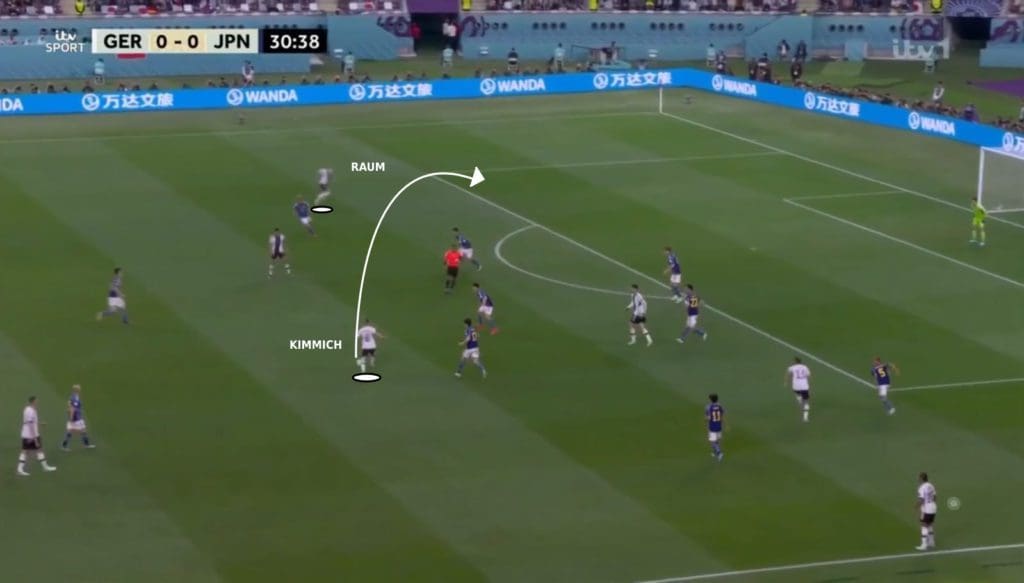 This was the story of the first half as Germany found ways to penetrate through Japan’s shape. Additionally, Moriyasu’s team struggled in possession as well. Germany’s pressing was on point and neutralized Japan and while they had a goal ruled out through offside, they struggled to break Germany’s defense on the transition. But the second half saw an important change from the manager that arguably resulted in the victory.

The second half – Japan bounce back

Moriyasu changed the shape of his team from a 4-4-2 to a 5-4-1 with a focus on man-marking Germany and controlling Kimmich and Gundogan. As you can see in the image, they pressed high in the second half, thanks to the change in shape, and suffocated their opponents. Moreover, they went man to man in the back and midfield with the back five covering Germany’s dangerous front five. This meant that Flick’s side were short on options when they received possession. 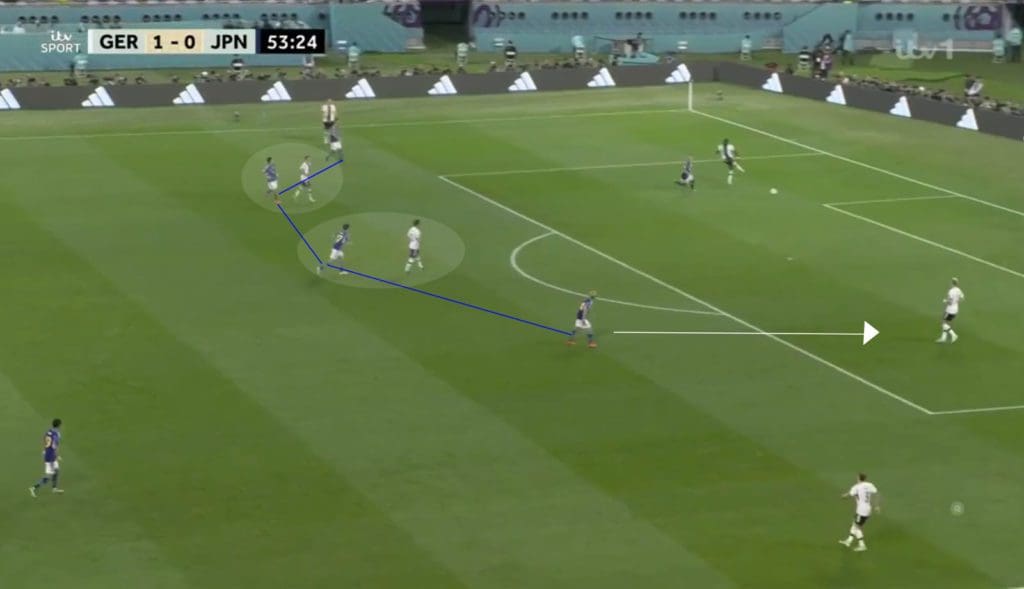 The likes of Musiala and Gnabry, however, are adept at 1v1 situation and despite being man-marked they created several chances and should have put the game to bed. But the momentum shifted in Japan’s favor when they brought Brighton’s Kaoru Mitoma, Takuma Asano, and Doan onto the field. The Japanese then started to attack in a 3-2-5 shape in possession (giving Germany a taste of their own medicine) and with Mitoma’s ability in the wide areas, they were able to arrive in the box with regularity.

Germany’s lack of pace at the back was evident as they struggled to deal with quick, intricate play by Japan. Substituting Gundogan also did not help as they lost control of the game and conceded the ball quickly. Ultimately, Doan scored the equalizer with Mitoma heavily involved in the move. You could see Japan’s wingers 1v1 against Germany’s fullbacks and this was the prime reason for their struggles towards the end.

Soon the second goal arrived as Asano beat the offside line and scored from a tight angle. Introducing Mitoma and Asano was a game changer and, in all fairness, a very brave approach by Moriyasu to attack Germany after the equalizer. The manager delivered a tactical masterclass, and despite their good fortune, they deserved to win. Japan has players capable of performing miracles on the field and qualifying in a group with Spain and Germany would be a result that the entire country could be proud of. 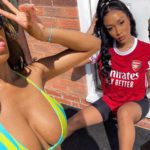 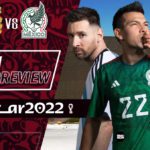