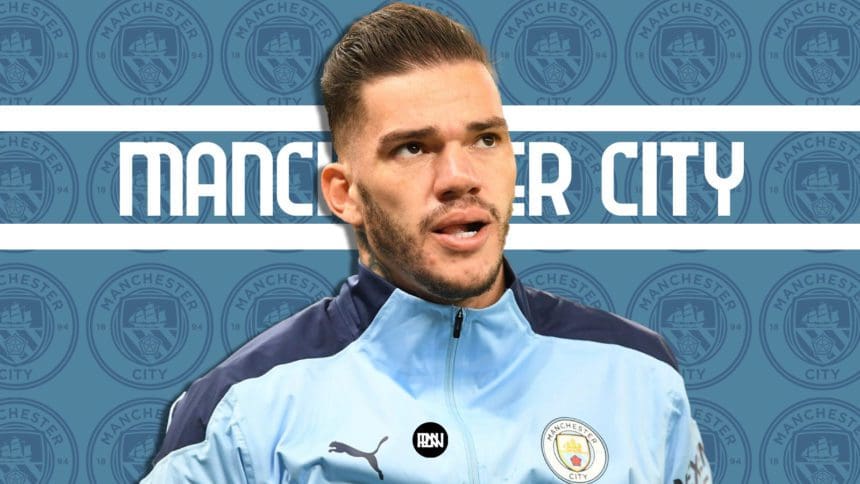 Pep Guardiola has always highlighted importance of goalkeepers in the build-ups, especially to get around that first press line and Ederson does exactly that time & time again for Manchester City…

Roberto De Zerbi and Pep Guardiola are two managers who have a certain style of play, which is exciting but undoubtedly hard to master. Guardiola, of course, has been lighting up the Premier League while creating a man-machine in the process. De Zerbi, meanwhile, has been in charge of Brighton & Hove Albion for just over a month. But the way Brighton played at the Etihad last week surprised many, including the pioneer Guardiola himself.

The Seagulls had more possession than their opponents (which is a rarity) and limited Manchester City, despite taking a high-risk approach. Teams have come to Manchester in the past and tried various attacking strategies only to be blown off by the City machine. But Guardiola almost always has answers readily available on his hands. This tactical approach by Brighton and the way Manchester City handled it was certainly interesting to watch and analyze, so let’s look at how Guardiola got the better of De Zerbi.

The approach by Brighton & Hove Albion

Brighton under De Zerbi have continued where they left off from Graham Potter. The results might say otherwise, but performances have been solid. The Italian coach has instilled a few tactical tweaks and the players have adapted to it extremely well. While Brighton have always been a well-drilled team, their man-marking approach out of possession against the Champions was something very few expected.

The last team to do it was Marcelo Bielsa’s Leeds United, and they were thrashed 7-0 at the Etihad just last year. Surprisingly this time, Man City struggled to adapt to Brighton’s press and De Zerbi’s side forced their opponents to go long several times in the opening minutes. Once Ederson played it short to the center halves, the Brighton players pressured the likes of Dias, Akanji, and Laporte in a flash.

The below passage of play is a perfect example of Brighton pressuring Man City’s players. Pep instructed Bernardo Silva to drop deeper to create space for the forward players, but Brighton had other ideas. Alexis Mac Allister, who is tasked to mark Silva, immediately latches on to him and that is the trigger for Brighton’s front line to press their man. (Lallana on Dias, Welbeck on Laporte, Trossard on Akanji). Dias was ultimately forced to go long where the likes of Webster and Dunk comfortably won aerial duels.

Man City faced a side who were ready to go man to man in any situation and Guardiola himself revealed the difficulty in facing Brighton’s approach. “Today, the game was one of the toughest ones we can face. They [Brighton] propose the type of game we are not used to. We did not have men free. In general, I’m so satisfied with the points because it was a tricky game,” he said. However, he ultimately had a solution in mind, which helped his team overcome the challenge.

After realizing Brighton’s man-to-man pressing, Guardiola called Dias, Bernardo Silva, Ederson, and Haaland to the touchline to provide some instructions. Since Ederson was the only free man in the buildup, he had a huge role to play. Bernardo Silva explained the tweak by Pep during his post-match interview.

“So Pep changed a bit what he thought was better. The change was getting me closer to Rodri, to attract them to me and try to play to Erling in between the lines. It was to give more space to him because if I was close to Erling I would cut off his space. So getting me closer to Rodri and the defenders would attract more players to us and then leave our players up front with more space to run.”

However, this did not solve the issues completely. In the situation below, we can exactly see the movements Silva mentions. The Portuguese started high up the pitch but dropped deep to attract his marker, Gross. The space opens up for Ederson to pick Haaland, because of Silva’s slight movement to the left, but Brighton were quick to close the spaces as seen here by Caicedo, who realized the danger and left his marker (De Bruyne) to pounce on Haaland. Although it was a risky approach, it ultimately paid off for Brighton, despite what the scoreline suggests.

Having said that, all it requires is one quality moment from Man City’s extremely talented players, and Ederson this time showcased his playmaking skills. Silva and Rodri drag their markers, therefore creating space centrally, but instead of looking to occupy the space, Haaland swirls and runs in behind Dunk and bulldozes his way past Sanchez and Webster to score. Whilst it was Guardiola’s blueprint, the execution from Ederson and Haaland were pinpoint and eventually made the difference.

Rotations from the left side were another option for Man City. Grealish, starting from the left wing, moved inside looking to drag Joel Veltman and create space in the left channel. But once again Brighton’s defenders did not engage with Man City’s players and looked to switch around their roles (From marking Silva in midfield, Gross moves to Grealish. Veltman now stays back to mark Silva). 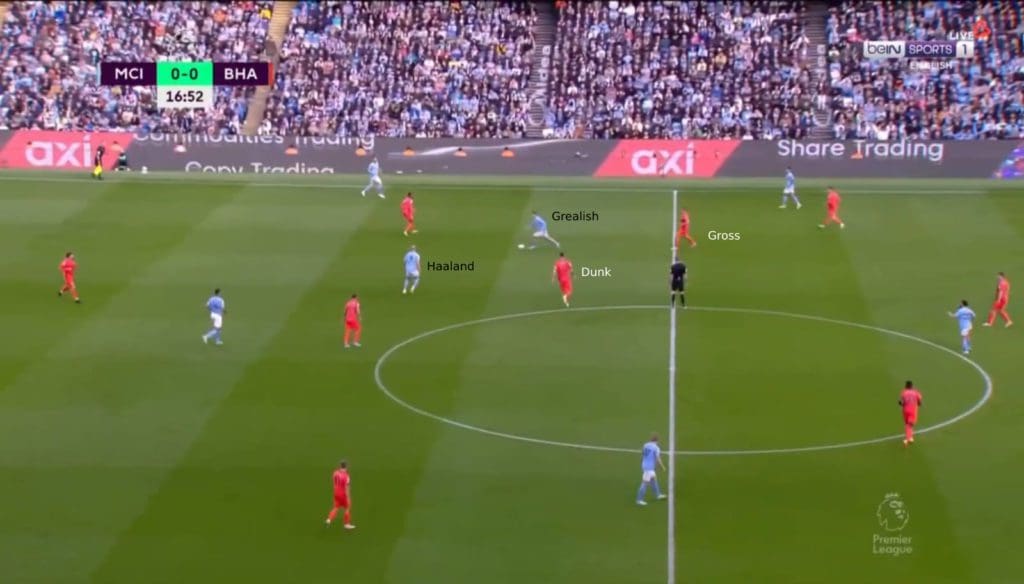 This type of marking requires extreme cohesion and communication from Brighton, and they executed it well for most parts. In this situation, however, Gross fails to get tight to Grealish, and Haaland, who dropped deep, makes a run in behind, which in turn, creates space centrally for Grealish to drive into. As a result, Man City progress the ball with ease. 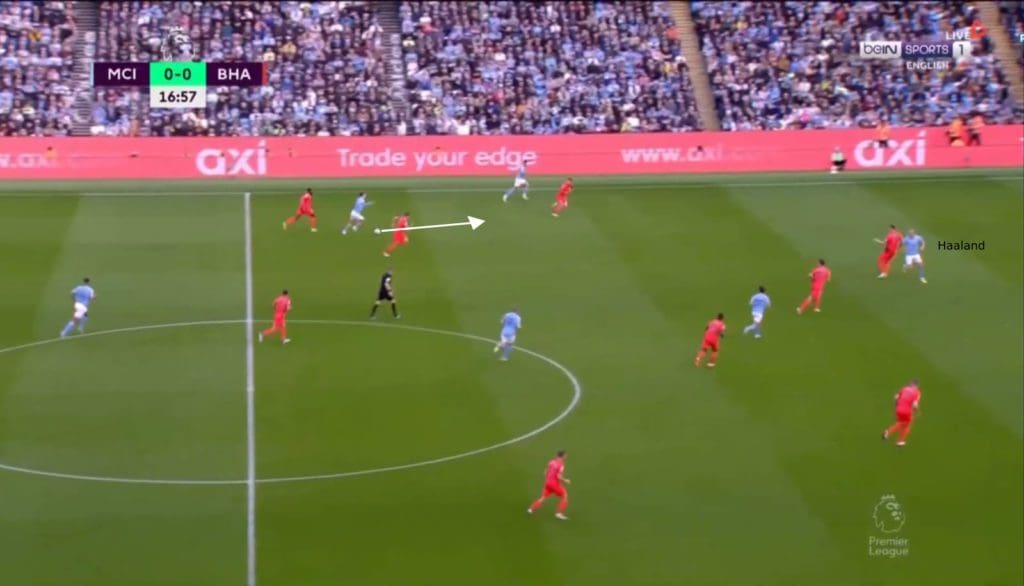 Moving on to Manchester City’s shape out of possession, they looked to close the passing options to Brighton’s double pivot Mac Allister and Moses Caicedo through De Bruyne and Bernardo Silva. Haaland engaged with Lewis Dunk and the goalkeeper Roberto Sanchez, while the wingers looked to press the wide center halves when the ball was played to them. Brighton struggled to deal with Man City’s intense pressing as De Bruyne and Silva shielded their double pivot. So, Sanchez, or the center backs when receiving the ball, usually hit long balls which Laporte, Dias, and Akanji dealt with. 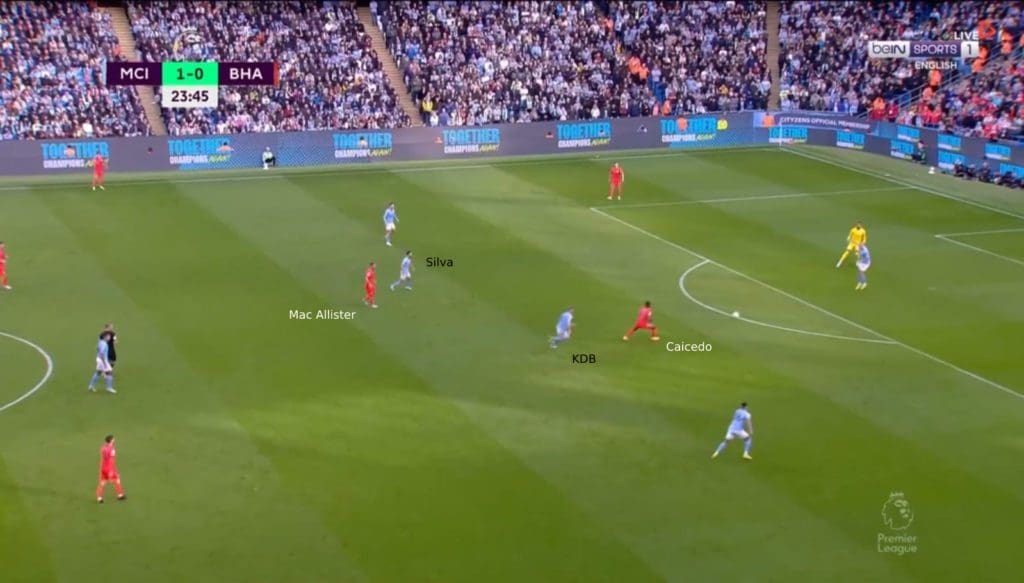 Nevertheless, De Zerbi’s side got the better of Man City until De Bruyne’s third goal and their progression started with the double pivot. In a typical De Zerbi way, Caicedo and Mac Allister are closer to each other as Brighton looks to lure Man City forward before quickly playing it to the vacated midfield. It worked brilliantly in the second half and the plaudits have to be given to the players for the brave approach both in and out of possession.

Manchester City eventually had the individual quality to brush aside Brighton for a 3-1 victory, but Brighton showed plenty of promise in the way they handled the threat from the Citizens. Guardiola would be glad that his side bounced back from the defeat at Anfield and will look to finish on the high before the break. 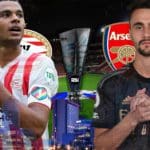 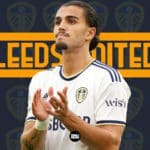