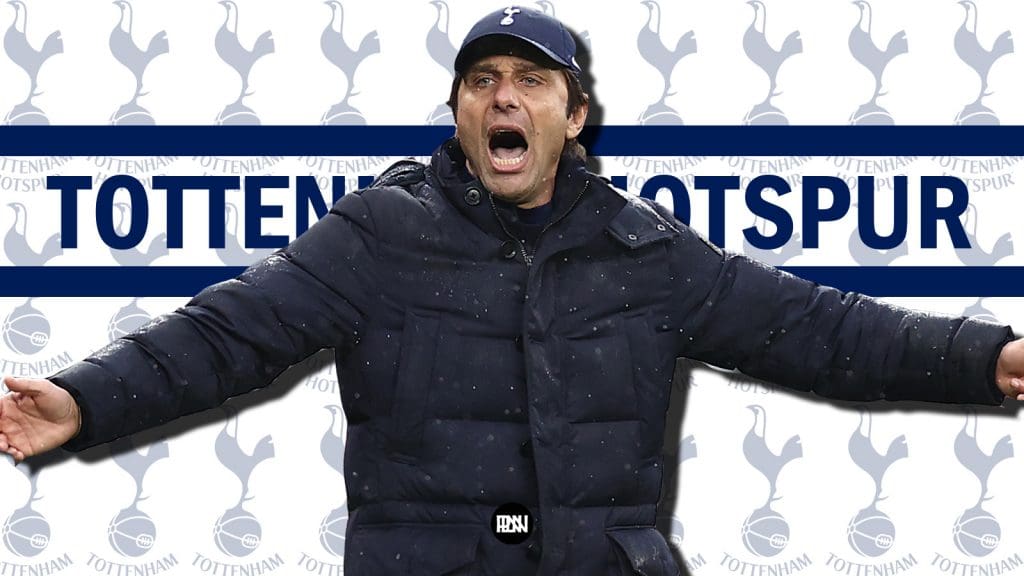 As Storm Franklin hit the UK, the Manchester City faithful expected their team to brush aside Tottenham Hotspur. Instead, Antonio Conte’s Spurs successfully landed a punch much to the delight of Liverpool fans. Harry Kane’s intelligence and Heung-Min Son’s explosiveness were once again on the menu. This article breakdowns how Conte’s tactics were decisive in beating Pep Guardiola’s high flying Cityzens.

Manchester City started in their usual 4-3-3 formation. Ilkay Gundogan replaced Riyad Mahrez in the starting XI from the midweek Champions League game, and John Stones made way for Kyle Walker.

Spurs lined up in a 3-4-3 formation; Eric Dier returned to the starting lineup after recovering from his injury, and Ryan Sessegnon continued to keep his place as Sergio Reguilon is ruled out with COVID 19.

The tone for this game was set from the first minute. Spurs reverted to a 5-4-1 shape off the ball with Manchester City on the front foot. Bernardo Silva started as a false nine as Phil Foden and Raheem Sterling were hugging the touchline to stretch Spurs’ defence. 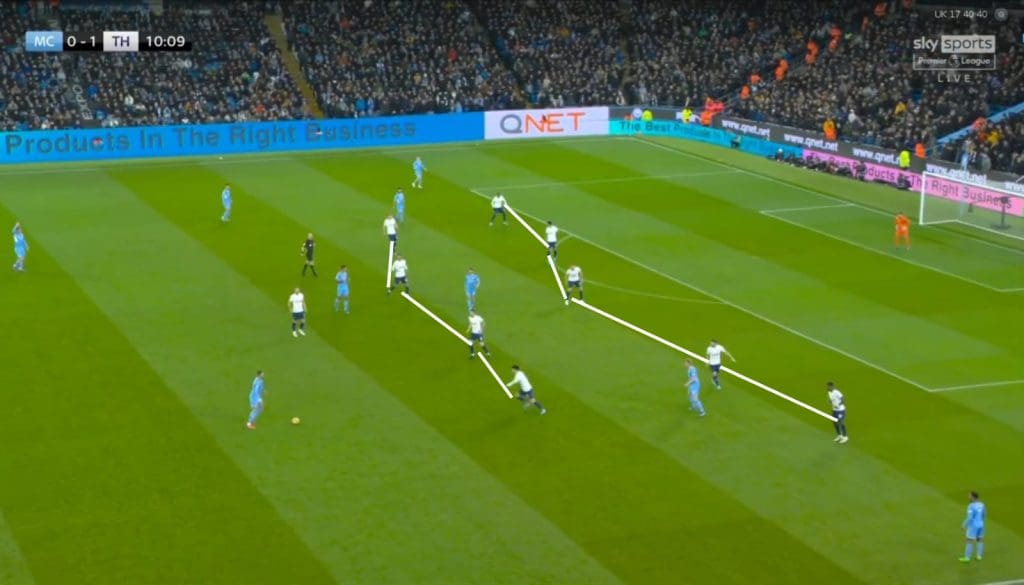 With Son and Dejan Kulusevski in the wide areas, Tottenham planned to hit City on the break. To their surprise, the team from North London were able to bypass City’s press with ease as early as the 1st minute. The Blues were warned when Son was ruled offside, but it was repeated in the 3rd minute when Kulusevski opened the scoring.

City pressed in a 4-2-3-1 shape. Bernardo Silva started as the false 9 and was instructed to press Spurs’ centre back. Meanwhile, Kevin De Bruyne was tasked to mark the ball sided central midfielder (Bentancur), and Sterling tucked in from the right side to cover the other midfielder (Hojbjerg). 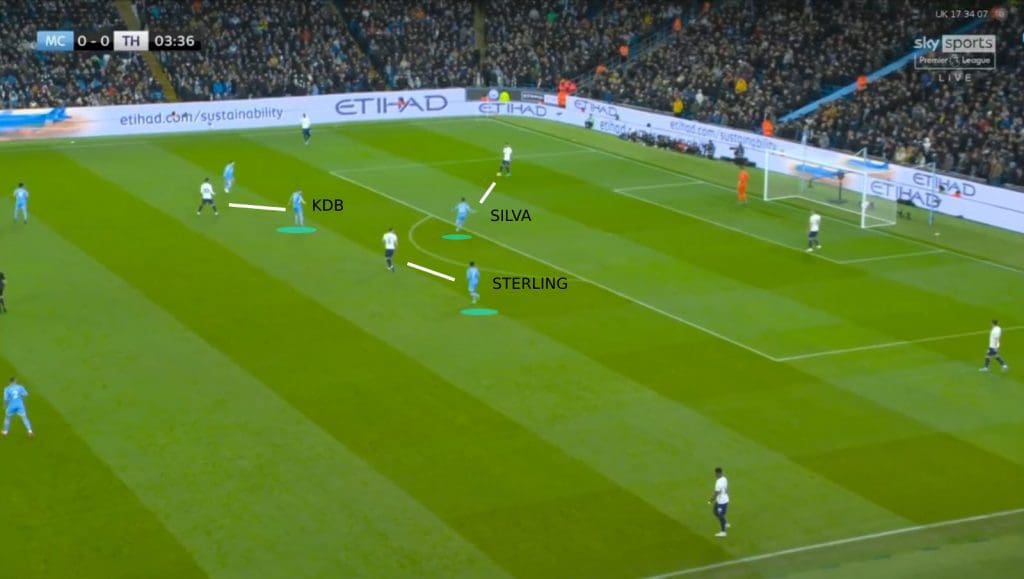 The problem started when Silva used his cover shadow to block Romero’s passing lane to the goalkeeper. The Argentine centre half now had the time to switch the play, and overload City’s right side.

Guardiola used the same 4-2-3-1 pattern against Chelsea in both their wins this campaign; however, the false 9 played by Foden was aggressive in pressuring the centre back which resulted in City winning the ball quickly.  This did not happen on Saturday. 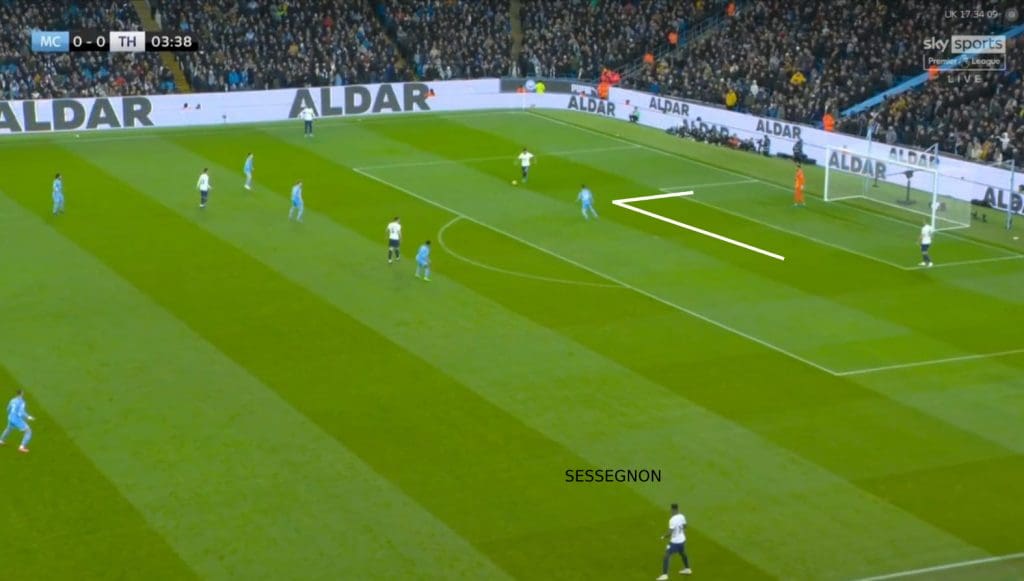 With Walker having to take care of left wing-back Ryan Sessegnon, it created a 2v1 situation with Son luring in behind. The Korean’s clever movement takes out Rodri which opens the path for Harry Kane to receive Ben Davies’ pass. 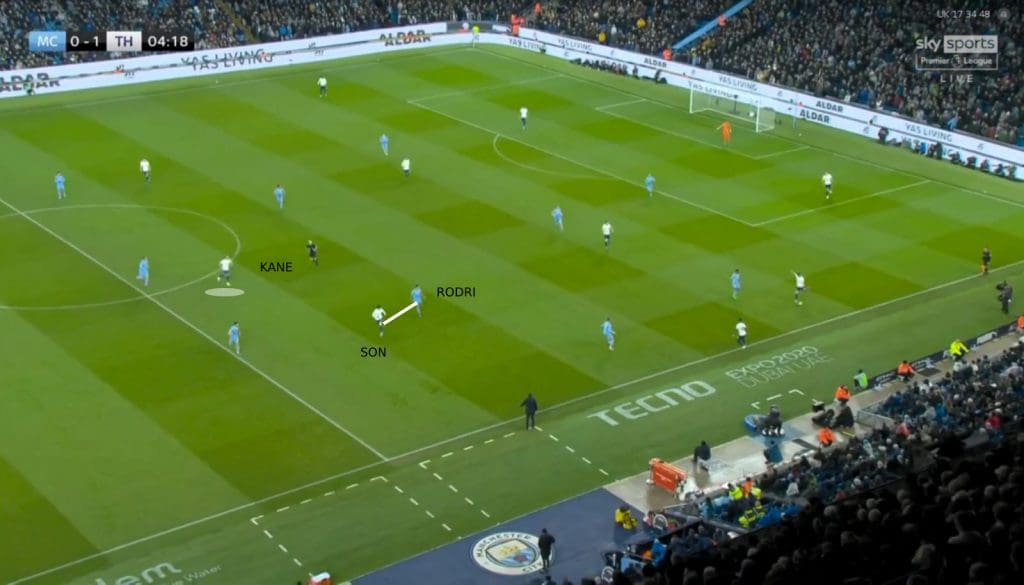 Aymeric Laporte reacts slowly to Kane’s movement, and Son is already on his way towards the goal. The England Captain plays a perfect first-time pass, Son calmly passes it to Kulusevski who slots the ball into the back of the net.

Speaking to Sky Sports in the post-match interview, Harry Kane revealed that it was a move that came straight from the training ground. 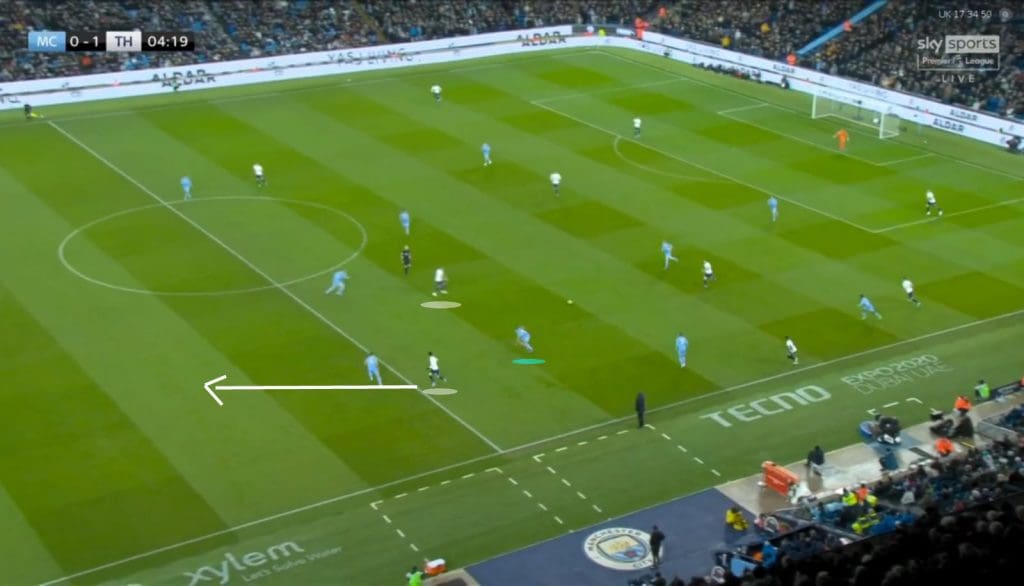 Meanwhile. Manchester City played in a 2-3-5 formation on the ball, and their front 5 were occupied by Spurs’ back 5. After Tottenham Hotspur went ahead, Pep Guardiola instructed Joao Cancelo to move wider, and Foden to drift inside. This meant that City overloaded the wide areas, so Kulusevki was tasked to track Cancelo. As a result, Kane was isolated in the front.

When Cancelo moved wider, Kevin De Bruyne dropped deeper, trying to make full use of his excellent crossing ability from the right half-space. 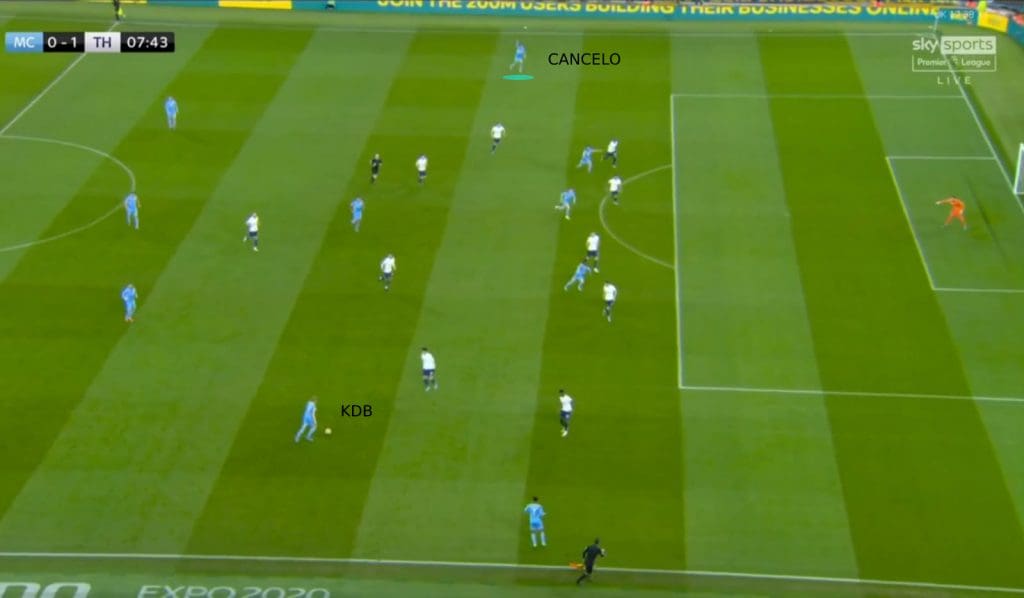 After the first goal Spurs struggled for an outlet. The Champions cut down their errors, closed down the spaces quickly, and their pressure was rewarded when Ilkay Gundogan pounced on Lloris’s error. The first half ended with Manchester City strongly on the front foot.

Many expected Manchester City to pick up from where they left off in the first half. The Sky Blues started the second half brightly, but the attacking momentum was beginning to fade. In the 58th minute, the game witnessed a twist.

As Spurs tried to build out from the back,  City pressed high and tried to block the passing lanes. Sterling closed down Romero and used his cover shadow to take out Spurs’ right wing-back (Emerson). Hojbjerg makes a movement inside, taking out De Bruyne which opened up the central area. 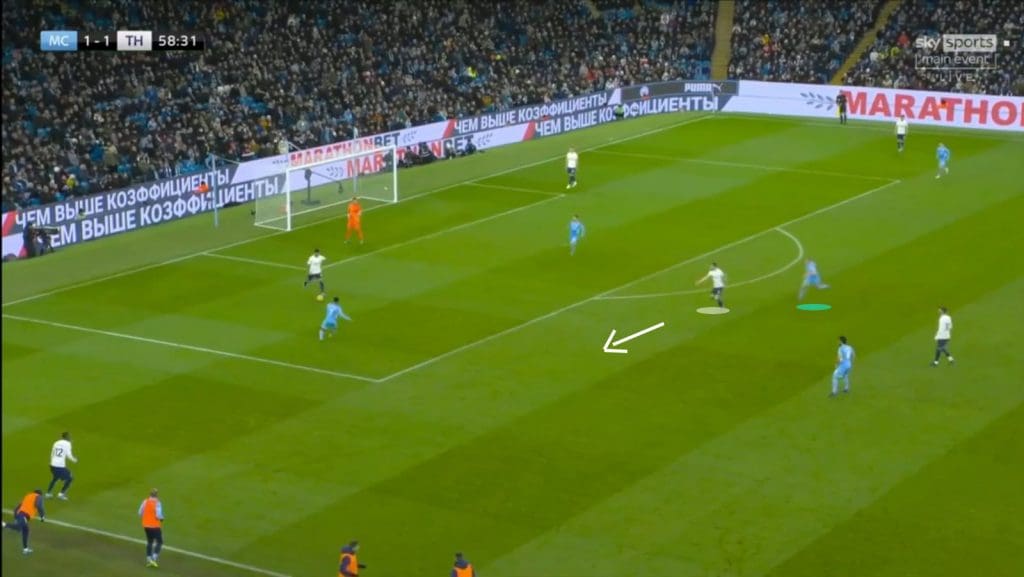 Kulusevski drops deeper to provide an option for Romero. The Swede picks up the ball, and links up with Emerson Royal who has space to drive forward with the ball. This also takes the City front four out of the game. 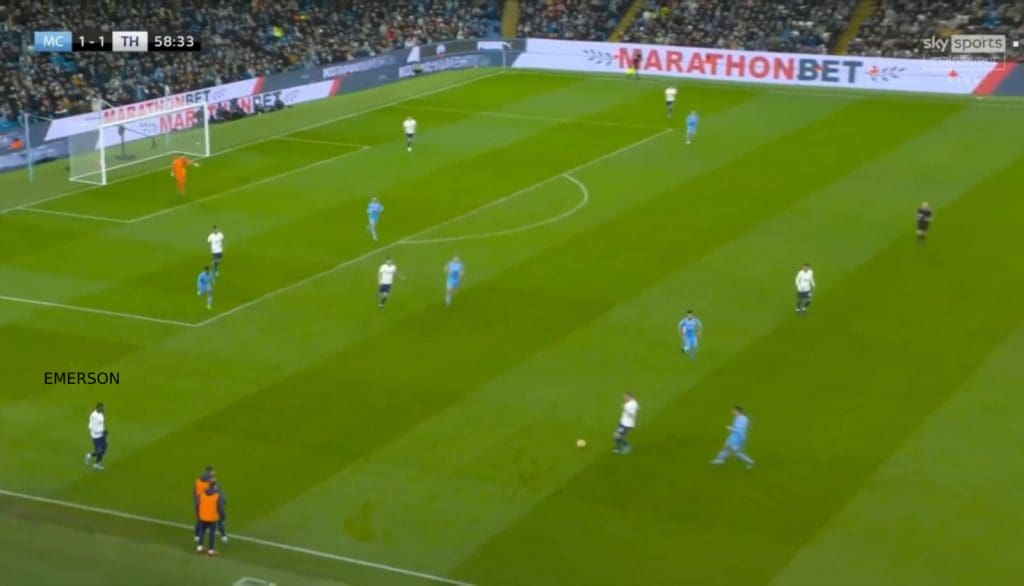 Since Romero’s pass takes out City’s forwards, Gundogan moves out of his position to press the right wing-back. As a domino effect, Rodri has a dilemma to pick Kane or Bentancur. As the Spanish defensive midfielder is left stranded, Kane drops between the line and receives the ball from Emerson. 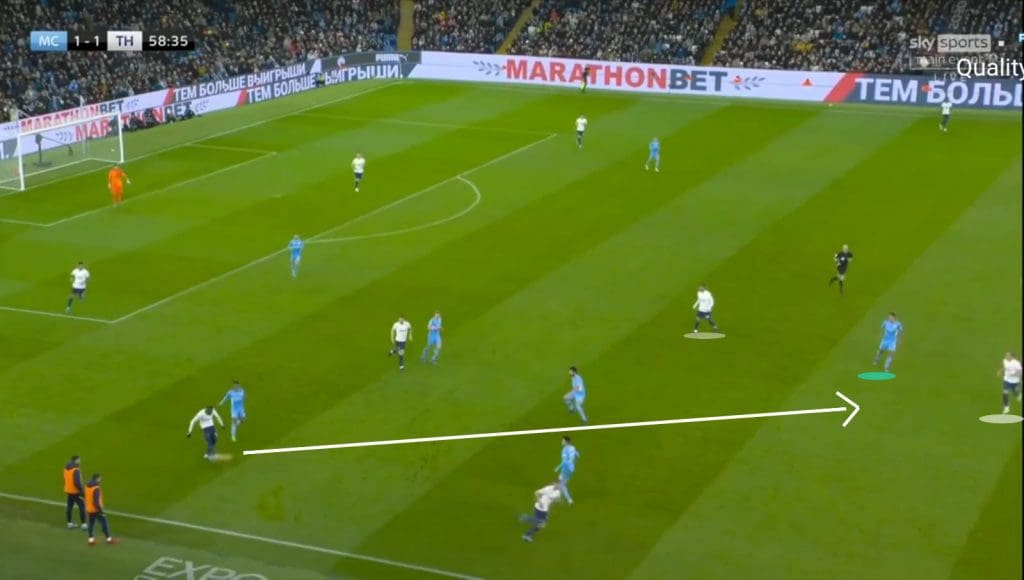 Kane carries the ball and tries to pick out Son’s run in behind. With Sessegnon bombing forward from the left side, Tottenham overload City. He wins the second ball, and Spurs have four men in the box ready to pounce at Son’s cross. As Laporte and Cancelo waited for support,  Spurs’ number 10 (Kane) makes a late run and finishes off a stunning team move. Antonio Conte would have proud to see his team execute the blueprint to perfection. 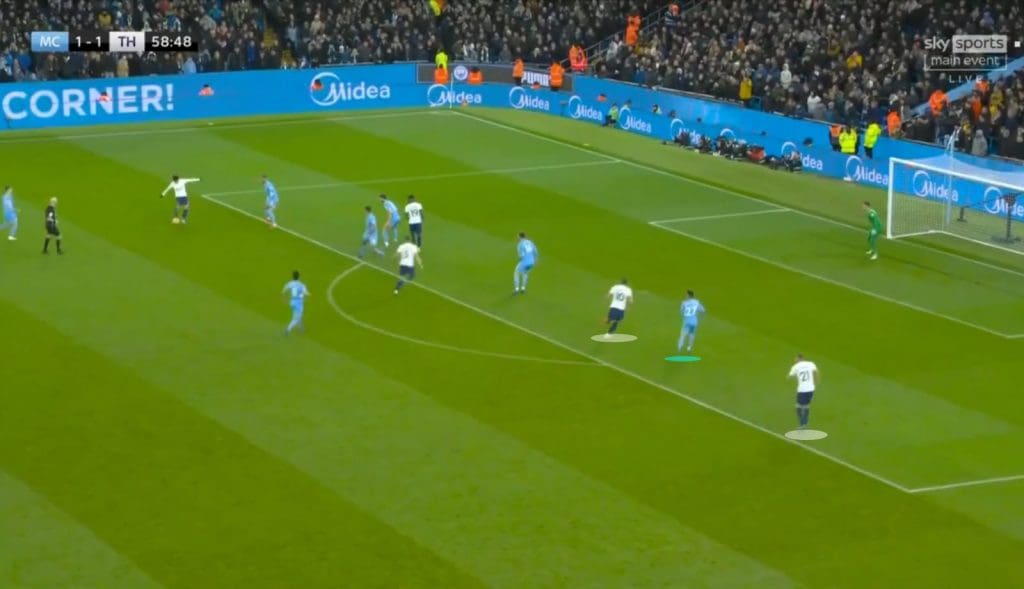 Manchester City pushed for an equaliser as Spurs went deeper and deeper inside their half. Their persistence paid off when City was awarded a spot-kick in the 92nd minute. Riyad Mahrez cooly slotted the ball in the top corner.

The City fans were hoping there was still time for a winner but Harry Kane broke their hearts (once again). With two minutes of stoppage time remaining, Tottenham scored the winner, as they exploited City’s left side. Joao Cancelo was caught ball watching as Kulusevki had the time and space to pick out Kane in the box. The away end went mad as the Tottenham Hotspur captain rounded off an all-round performance with a stoppage-time winner.

This was Harry Kane’s night. The Tottenham talisman caused all sorts of trouble to Manchester City. He dropped deep, dictated the play and made late runs into the penalty box to score twice.

Jamie Carragher in the Sky Sports studio was full of praise. He said, “That was one of the best performances I’ve seen this season, it really was. It was a privilege to watch. What made it so special was that Kane didn’t get a lot of the ball, but when it came into him, everything he did was pure class.”

The Manchester City defenders didn’t get tight to Kane. They were always caught in two minds, and he made full use of it. Pep Guardiola has suffered against a 3-4-3 system in the past, notably in the Champions League final against Chelsea. With fast, technical and high-quality players, Spurs exploited City by creating overloads all over the pitch.

The credit also has to be given to Antonio Conte. His tactics were flawless as Tottenham Hotspur bounced back in style after a three-game losing run. This result means the title race is wide open. Liverpool have won nine on the spin in all competitions, and are gaining momentum. Pep Guardiola knows the race will go right down to the wire as his team will try and bounce back from the defeat when they face Everton on Saturday.