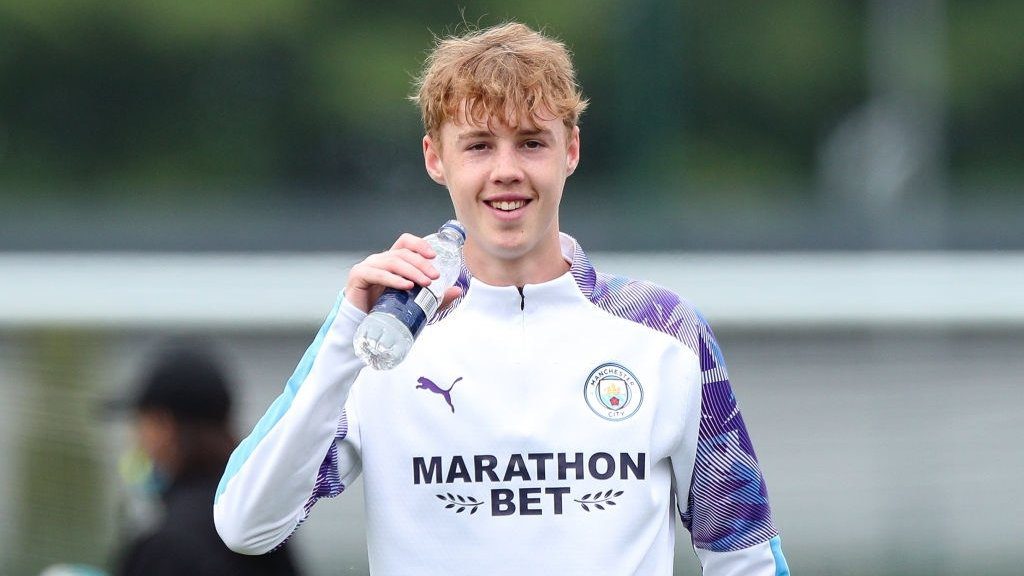 Manchester City academy is regarded as one of the best academies in UK. Already produced and nurtured players like Joe Hart, Micah Richards, Jadon Sancho, Phil Foden and Eric Garcia; a new name, Cole Palmer has emerged as the favorite to make his way into Pep Guardiola’s ranks.

In season 2020-21, Cole Palmer was briefly training with the first team squad and as a result Pep Guardiola is so impressed that he is set to promote him to the first team permanently.

Cole Palmer is a 19-year-old midfielder whose primary position is of a central attacking midfielder, but he can comfortably play as a central mid, also his silky left foot allows him to cut in and score from the right-wing spot. His positional flexibility is the testament of his technical skills.

The England born midfielder joined Manchester City in 2010 as an under-8 player. He rose through the youth ranks and made his senior debut in a 3-0 victory against Burnley in Carabao Cup this season.

Highly rated by his youth coach, Palmer was handed captaincy in his under 18s days. He has already experienced the highest level of football in Man City shirt as he made an appearance as a substitute in UEFA Champions League group stage match against Marseille; also made bench against Porto, Olympiakos and Marseille and several matches in Premier League.

Coming from a prolific season in EDS. Palmer capped 16 appearances in PL2, starting 15 of them. He scored 13 goals including a hattrick against West Ham ending the season with goals only behind tournament’s highest scorer and his attacking partner Liam Delap. Alongside scoring goals, he set up 6 goals for his teammates.

Palmer had interest from Championship sides for loan opportunities. City were firm to keep him at the club and thus tied him up to a new lengthy contract. As seen previously, footballing world got to know this season through Phil Foden that if City decides to keep a youngster, then Pep Guardiola has something special for him lined up.

What can we expect from City’s new graduate?

Realistically, he is still raw and improving. City are making themselves ready for next decade. With all the players from 11-12 season having left the club already, Pep Guardiola must have realised that it is time to create a new spine for the future. This future rebuild project is already in place, with players like Phil Foden, Ferran Torres and Ruben Dias already making name in the first team. Cole Palmer will be joining them in the first team soon.

Why does having Cole Palmer is best decision for both parties?

Palmer’s play-style is similar to Phil Foden’s. Pep Guardiola loves left-footed players in his squad, as he already has Bernardo Silva, Phil Foden, Riyadh Mahrez and Oleksandr Zinchenko at his disposal. We also know how former Barcelona tactician nurtured Lionel Messi another Left-Footed maestro in his early days.

In recent years, City’s midfielders have had to step up in big games to score the goals. Players like Ilkay Gundogan, Kevin De Bruyne and Bernardo Silva have performed their best when allowed to play free role. Palmer with his positional flexibility could play a similar role. As he loves to make runs in the box to score goals or cut in from right side to disturb the opposition’s defense. Standing 189 cm tall, he could come helpful in set piece situations.

Despite his tall stature, Palmer is a blessed dribbler of the ball. His quick feet enable him to dribble past opposition defenders with ease and create goal scoring opportunities for the team. Palmer’s skills and his hard-working attitude has not gone unnoticed, Pep Guardiola regards his as one of the humblest players in Manchester City Squad.

Manchester City is one of the best teams in the world right now. With opportunity to learn and grow under Pep Guardiola and get to train with some of the finest players in world football, staying at Etihad is the best decision for his career.