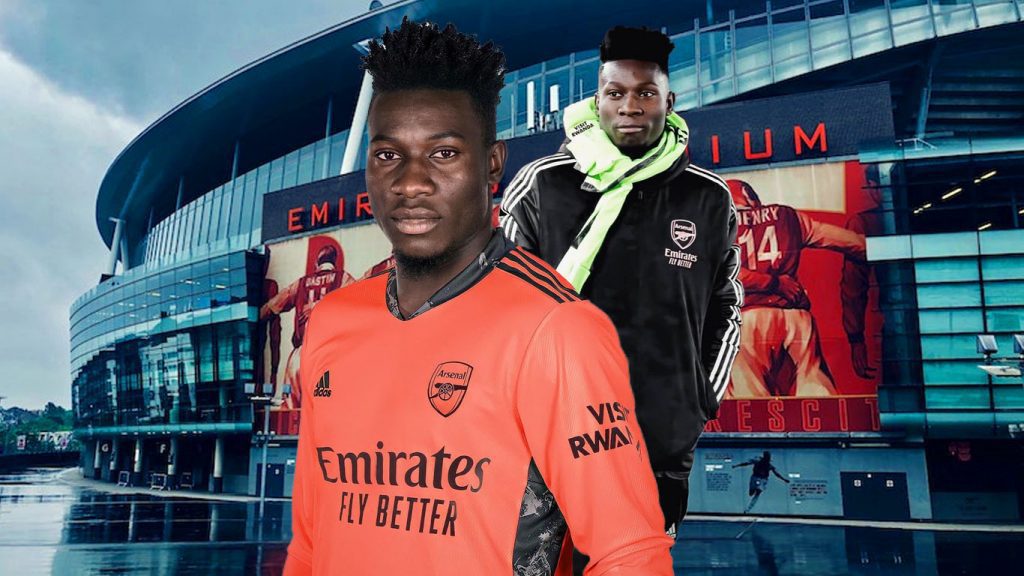 Arsenal will need to complete some clever deals this summer if they are to replenish their squad without spending a lot of money. Mikel Arteta wants to improve the personnel in several areas, including the goalkeeping one, as Bernd Leno is deemed ‘not good enough’ by the Spaniard. Thus, since last week, Arsenal have been linked with Ajax goalkeeper Andre Onana, who has not played a game since February of this year.

Since he arrived in 2019, Mikel Arteta has not been a fan of Bernd Leno and has always wanted to replace the German. Leno’s performances this season gave the Arsenal fans enough evidence as well after the German looked uneasy when in possession of the ball, while he has also had made several blunders in goal this season.

Arteta has stressed the need of having a keeper who can play out from the back while also be good in 1v1 situations. Andre Onana, who was a big part of Ajax’s 2018/19 Champions League campaign has been linked with a move to England since last season. While it looked like Chelsea would complete a deal for the Cameroonian last summer, his £35 million price tag drove Chelsea away to sign a cheaper option in Rennes goalkeeper, Edouard Mendy.

However, a lot has changed since then, including Onana’s valuation, due to several factors. Onana has only one year more on his contract, while he was also found guilty by UEFA of doping. The 25-year-old was found guilty of consuming a substance called Furosemide, which Onana later clarified on social media stating that it was a genuine mistake as it was prescribed to him by his girlfriend and he mistook it for aspirin. Thus, Onana is banned from taking part in playing and training in the sport until February 2022.

This led to Ajax’s asking price come down to £7 million for the Cameroonian, a price Arsenal feel they can stump up to secure the player’s services. Although Onana was found guilty of doping, there are no doubts regarding his talents as a goalkeeper.

Until he was suspended in February, Onana played a crucial role in Ajax’s title victory. The side conceded only 23 goals, and Onana was the major reason for these numbers. Onana averaged an 80% save completion rate, better than the likes of Ederson, Edouard Mendy, and Manuel Neuer.

Onana’s goals-against average per 90 minutes of 0.75 is only lower than Jan Oblak’s this season. The Cameroonian has also been brilliant in distributing the ball to his teammates as he has averaged 7.2 successful long balls this season, while his pass completion range has of 48% is only lower than Manuel Neuer this campaign. One of Bernd Leno’s main criticism this season has been the lack of stopping dangerous crosses into the box. Onana has been one of the best in Europe at this in the 20/21 season, alongside the likes of Ederson and Jan Oblak. This is elite company, and Onana is only going to get better over the years.

The Gunners are in desperate need of a keeper who can provide them with such consistent performances, and £7 million for a player of Onana’s calibre is a bargain in the current market.

Mikel Arteta is focused on rebuilding the club in the next two transfer windows, and signing Onana on a cheap fee will take care of one area on the pitch for a long time to come. The club could also go a step ahead and sign the player on a long-term contract, however, unless UEFA accepts Onana’s appeal this summer, it does not look like the Cameroonian can play for any club until February. This will not be a massive problem for the Gunners as they also have Mathew Ryan in the squad, who is currently the 2nd choice keeper after Bernd Leno.

Leno, on the other hand, wants Champions League football and will look to secure a move away from the club this summer. If Arsenal can sell the German for more than £30 million, they could use that amount to spend on their other transfer targets, namely Houssem Aouar, Emiliano Buendia, and Raheem Sterling.

Andre Onana, who has been pushing for a move to England for the past couple of seasons, will be hoping to secure the move as soon as possible, and given his measly transfer fee, it could not be long before Arsenal announce the signing of the 25-year-old Ajax man.

Raheem Sterling to Arsenal: Will the Gunners be able to get this deal over the line?
Kieran Trippier to Manchester United – Here We Go soon?
To Top