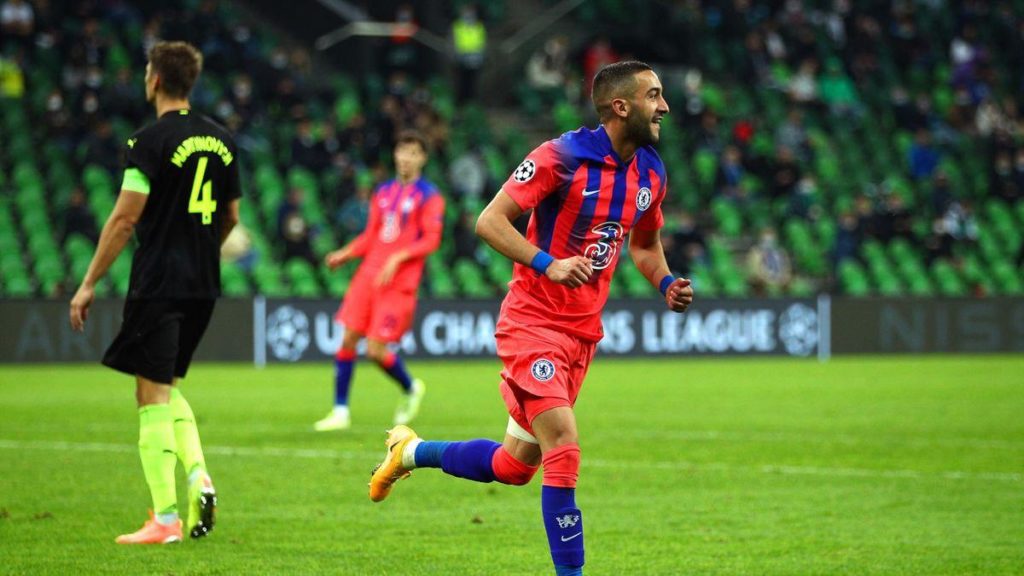 Chelsea faced FC Krasnodar in their 2nd Champions League group stage match this season that did end up with a convincing 4-0 win. New signings were on point as Timo Werner, Kai Havertz and Hakim Ziyech all had goal contributions and Edouard Mendy managed another clean sheet. However, the headline grabber was their Moroccan Wizard Hakim Ziyech. He started his first official game in the Chelsea shirt and had a Man of the Match winning performance. It was all the more special considering the fact that it was his first official game since the Dutch League was adjourned before the lockdown.

Everyone praised the Chelsea no. 22 as he scored Chelsea’s third goal with brilliant footwork and composed finish. He was too involved in the first goal where he made the crucial pass just before the assist.

FC Krasnodar could be considered weaker in comparison to other teams but the figures that he did put are beyond par. He made 57 touches in the game before getting subbed off at the 80th minute mark. He had a great passing accuracy of 87% and rarely did put a foot wrong. He seemed to be the most active guy during attacks even when the team looked a bit slow in the build-up during first half. He ended the game with 5 shots out of which 4 were on target. He was confident enough to shoot with both left and right foot. His pass to Kai, who registered an assist for Odoi, was key in breaking the deadlock.

In the second half, he came all guns blazing. Once Frank made his changes and moved to a 4-3-3, he linked up well around the box and did get his well-deserved goal at the 79th minute mark. He was subbed off just after his goal as Frank has to be careful in managing his game time.

Not just offensively, Hakim did play a crucial role in the defense. Well known for his off the ball attributes, he managed 7 recoveries and 2 perfect tackles. He was the one who always initiated the press and did motivate the forward line to contribute defensively. His movement off the ball in covering lines was perfect as well. Frank was full of praises for him after the match and will hope for such performances in the future.

Just a game would certainly not decide how he will perform in the future but such a promising start will boost up confidence in the team. More time to link up with fellow mates and the team will be a force to reckon.