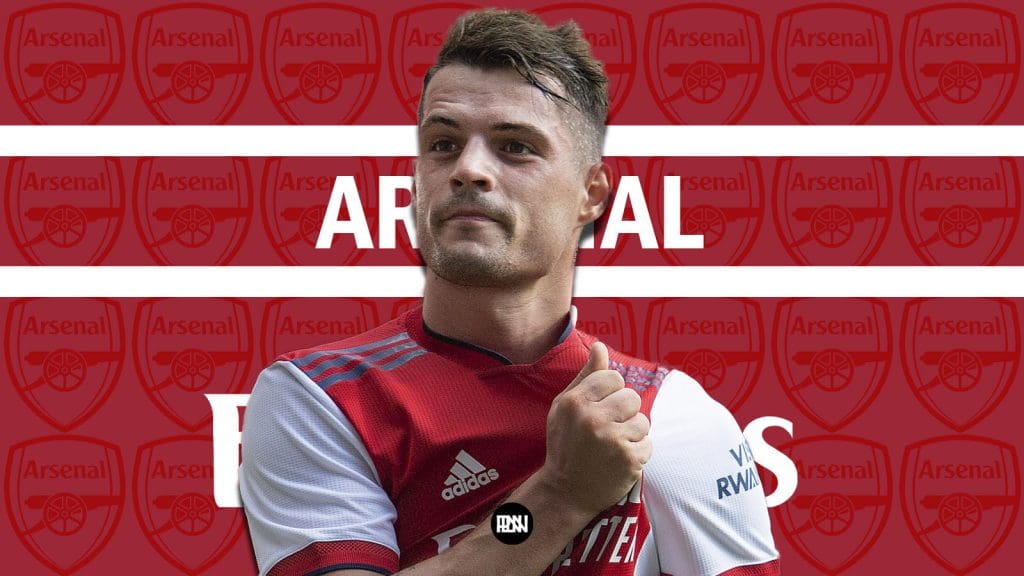 Arsenal’s midfielder Granit Xhaka was poised to end his Gunners’ adventure before the conclusion of summer’s transfer window, as AS Roma were strongly linked with the Switzerland international captain relentlessly.

The 28-year-old midfielder literally gave a hint about a possible interest in joining the Serie A outfit which is being coached by the media’s most entertained and controversial Portuguese descent Jose Mourinho. Both men had previously cynically commented on each other’s social media pages, and Jose Mourinho had once praised Xhaka for his unglamorous but instrumental impact on Arsenal’s team.

Since Granit Xhaka’s signing from Borussia Monchengladbach in the 2016 summer transfer, his performances has continued to divide opinion among the fans despite being very vocal on and off the pitch. His abilities, impact, and leadership qualities which he has widely been praised for have always been his major strength which can’t be denied.

Apart from losing the captain’s armband to Aubameyang after his altercation with the fans, in Arsenal’s match against Crystal Palace during Unai Emery’s era – Xhaka has looked destined to be heading towards the exit door, but Mikel Arteta’s intervention after taking over the managerial position from Unai Emery proved critical in his stay at the Emirates. This summer’s contract extension has notably being Mikel Arteta’s second influence in stopping the 28-year-old player from dumping the Emirate side in his tenure.

HOW WAS HIS CONTRACT EXTENSION ANNOUNCED?

As it’s widely done or expected, many fans were waiting for an official announcement from Arsenal’s website to confirm the widely spread rumour concerning his contract extension but surprisingly, Xhaka revealed the news over his social media (Instagram) page almost immediately after it was posted through a statement from the owners in the matchday program before Arsenal’s match against Chelsea. It was stated that: “We have renewed the deals of Kieran Tierney and Emile Smith Rowe, both on a long-term basis. These are young players that we are convinced can develop further and have a bright future with us. They are supported by a strong group of more experienced players including Granit Xhaka, who has signed an extended contract. This is an important step in terms of maintaining balance and stability in the squad.” 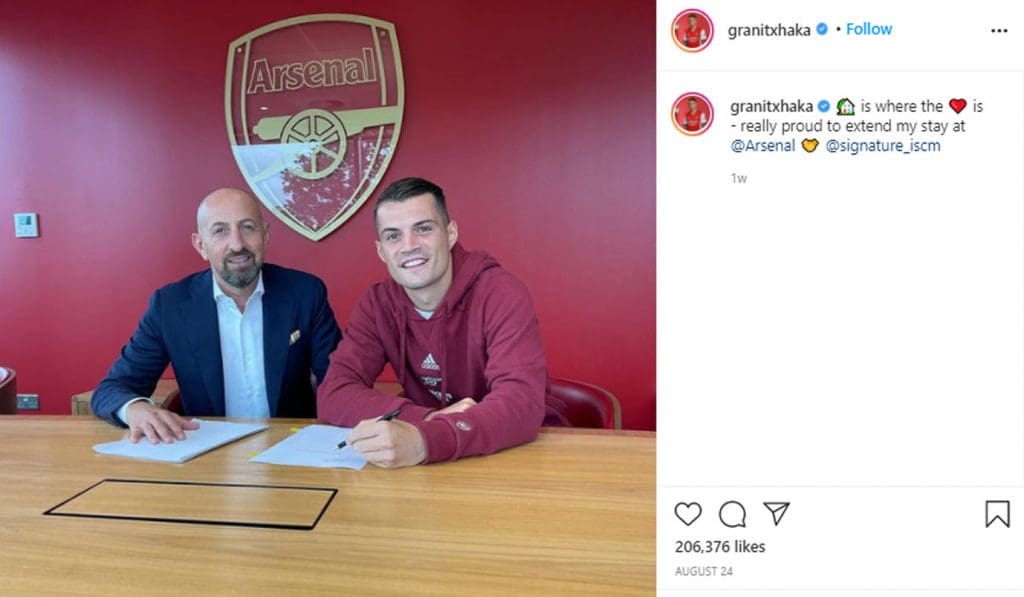 In Xhaka’s statement, he stated that “Home is where the heart is, really proud to extend my stay at Arsenal”.

After the club’s second game, talking through the official club website, he revealed that: “I’m very happy, I’m still here. I’ve signed a new contract of course and I want to give back, first of all to tour staff, and then after to our fans. They know I will give everything – in every game and every training session. So yeah, I think we have to show that as a team soon.”

Xhaka’s contract with the North London side was said to have been extended until 2024 with an option for a further year but questions will never stop being asked. He had a great outing during the just concluded Euro 2020 tournament which seems more than enough to attract suitors. Why was his contract extended when he seemed destined to be on his way out?

Mikel Arteta had once quoted to have a preference for a 4-3-3 formation, which requires a mobile, swift, versatile, and good ball carrier. These traits aren’t too familiar with Xhaka. His inability to make a swift move, quick progressive decisions or deficiency as a renowned ball carrier has most times slowed down the pace of the game during the transition, while directing his passes into safe and easy channels instead of progressing the ball quickly to the more attacking players. He’s not press resistant neither is he an excellent dribbler with good off-the-ball intelligence.

Over the summer, Arsenal had been linked with midfielders like Houssem Aouar and James Maddison, who seem to be more suited to Arteta’s preferred system. Then what happened?

WHAT COULD BE THE REASON BEHIND XHAKA’S CONTRACT EXTENSION?

Regardless of Xhaka’s deficiencies, the Swiss is known to be a great leader in the locker room and also well respected among his mate. Being the managers’ captaincy choice consecutively can never be tagged as a coincident. His influence and reputation in the dressing room seem to be the major reason why he was given an extension coupled with maintaining his value as he would have had a year left on contract next summer if he hadn’t signed an extension.

Cited by the Mirror, Arteta revealed the reason behind their decision to extend his contract against all odds: “We never wanted to let him go,” he said. “We explained to him the role he would have in the team, how important he was and how far he has come in the last two seasons.

“And the fact that he has come through some difficult moments and how he has reacted and achieved and the respect he has gained, not only on the field, but around the club and in that dressing room.

“We believed that he was a really important figure and we need players like that for the development of the young players we have.

“It’s difficult because you don’t get to see much of what happens inside. People just analyze a performance or a way of a player and whether you like him more or less. But from our side there is no doubting his importance in the team and squad.”

WHY WAS XHAKA’S CONTRACT EXTENSION NOT ANNOUNCED ON THE CLUB’S WEBSITE?

Definitely, the board seems to be aware of the fans’ displeasure about Xhaka’s extension considering the fans yearning for a more direct and progressive midfielder to complement Thomas Partey’s bravery, technical ability, and grit. Having a mobile and technically gifted player like Sambi Lokonga has always been expected to be signed but there is still time before we see him live upto his potential at the Emirates.

Irrespective of anything and everything going around the club, Mikel & his men need a personality like Xhaka in the dressing room and it’d do him great if fans get behind him rather than doubting the club on every step they take.