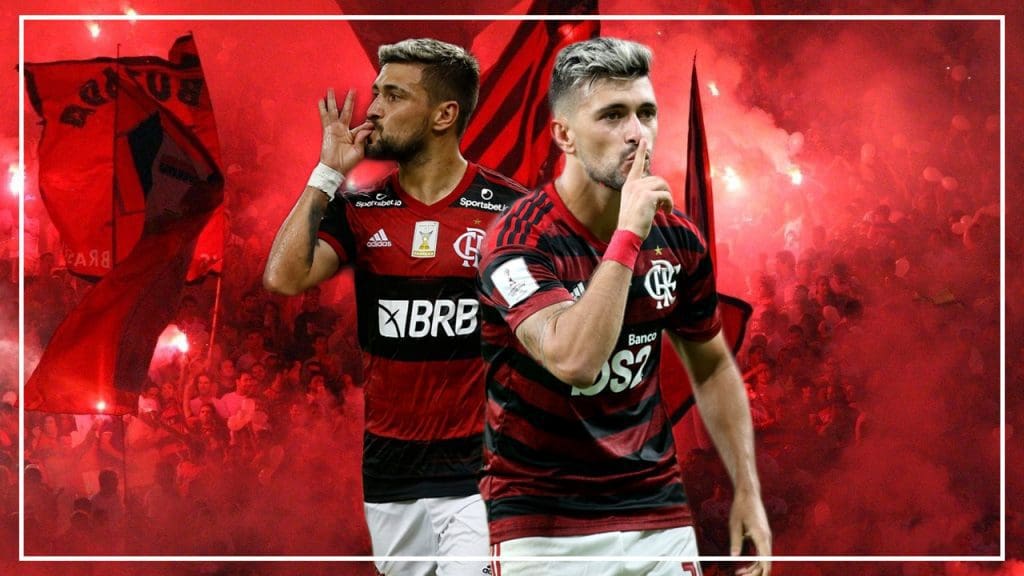 It is often said that the Brazilian league i.e Brasileiro Serie A produces the best footballing talent in the world. However, it is a little-known fact that several players (mainly South American) who are at their footballing peak also play in this league due to the league’s style of football. One such case is Giorgian De Arrascaeta, who is currently playing his best football at Flamengo and it has often been argued as to why the Uruguayan has not shifted to Europe yet.

However, according to recent reports from Urguyuan news outlet Traspaos, Premier League club, Aston Villa are interested in signing Arrascaeta this summer.

Giorgian De Arrascaeta style of play and what makes the Uruguayan a good prospect:

Arrascaeta, who started his career with Uruguayan club, Defensor, made the move to Cruzeiro (second division Brazilian club) in 2013, on the back of an excellent confederations cup in 2013. While most people expected the Uruguyan to move to Europe, Cruizerio was Arrascaeta’s choice, and it made sense at the time, given that he was only 21-years-old.

He who developed as a central midfielder played his best football as an attacking midfielder in a three-man midfield. A powerful runner and an inventive creator, Arrascaeta made his name in South American football through his incredible dribbling ability and his innate passing ability. Thus, by the time he was 25, everybody expected the Uruguyan to leave for Europe with several clubs interested. However, yet again Arrascaeta chose a Brazilian club, this time in the first tier of Brazilian football with Flamengo for a club-record fee of £13.32 million.

Last season, Arrascaeta was instrumental for Flamengo as he scored 8 goals and provided 9 assists in 28 Serie A appearances for the club. For a first season and the huge transfer fee, the 26-year-old justified everything he had promised and has followed it up this season. Although the league is in its early stages, Arrascaeta has managed to score 2 goals and provide 3 assists in 4 appearances this season with a promise to better his goal tally from last season.

Arrascaeta’s vision, pace, and shooting range has made him one of the best prospects in the league and has caught the attention of Aston Villa in England who are now interested in bringing the Urguyuan to Villa Park in the summer.

Aston Villa have had a strong second season in the Premier League since their promotion in 2019. Currently 11th in the table with 49 points, Villa could finish in the top half of the table by the end of the season, while they were also top of the league table for a brief period at the start of the season.

Players like Jack Grealish, John McGinn, Ollie Watkins, and Ezri Konsa have been brilliant this season for the club, while Chelsea loanee Ross Barkley has also played a decent role in midfield for the club. However, with Villa not interested in buying Barkley on a permanent transfer, the attacking midfield role will be vacant and Villa have recognised Giorgian De Arrascaeta as the ideal replacement for that role.

Much like Watkins and Grealish, Arrascaeta is a player with a lot of speed while his creativity can propel Aston Villa to compete for a spot in Europe next summer. Villa are keen to form a solid starting XI, and Arrascaeta could be the missing piece of the otherwise well-assembled puzzle.

While there has been no formal offer from the club, once the season is over on the 23rd of May, Villa will try to secure a number of their transfer targets, Arrascaeta being one of them. Flamengo are set to hold out for a £25 million fee for the attacking midfielder and if Aston Villa are in need to fill that role immediately, the price should not be an issue for them.

Aston Villa are trying to bring back their glory days, and buying good players is a good starting point. Whether Arrascaeta will be at Villa Park next season, only time will tell.

Why Rafael Borre is the ideal signing for Watford!
Chelsea are keeping an eye on Maxence Lacroix
To Top