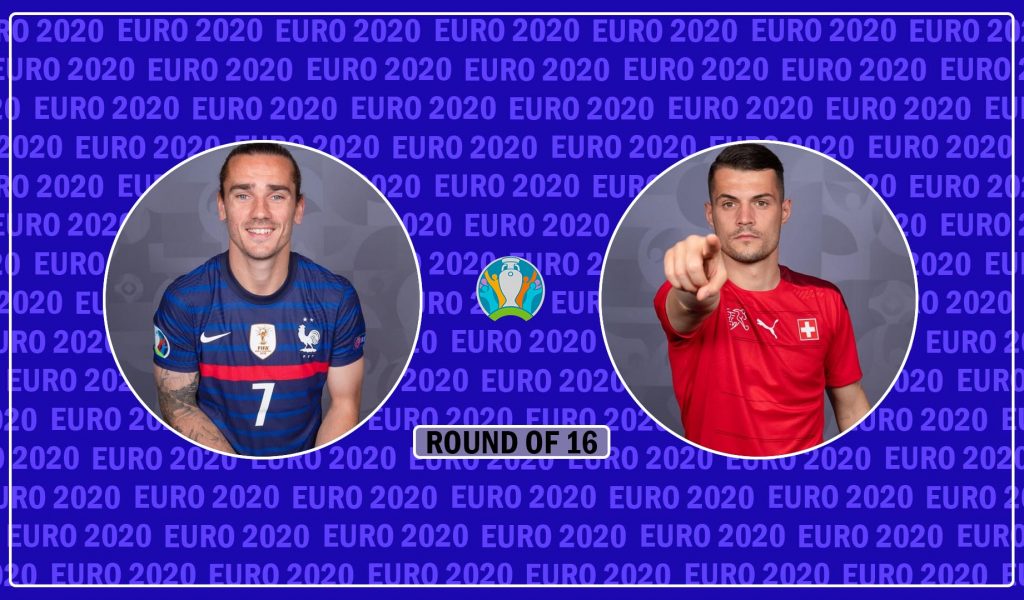 It’s the battle of David vs Goliath in the UEFA Euro 2020 Round of 16 when minnows Switzerland go up against reigning World Champions and Euro 2020 favourites France on Monday night at the National Arena in Bucharest. The Round of 16 has already thrown up some upsets, with big names Netherlands and Portugal already knocked out. Fans are now eager to see if this game will have something similar and if Switzerland can pull off a shock victory.

France have a squad full of stars from various leagues across Europe, and it is hard to look past this team when predicting who will lift the trophy at the end. They did well to top their group, a group consisting of Portugal, Germany, and Hungary besides them. France were embroiled in an end-to-end battle with Portugal in their last group game, a game that ended 2-2 and provided a treat for viewers with their quality football.

Les Bleus showed their attacking strength with Karim Benzema scoring twice, in what were his first goals for his country since 2015. Coach Didier Deschamps was pleased with his side’s display although he will be ruing the defensive errors by his team that gave Portugal two penalties. He will be hoping for a better defensive performance against Switzerland, and there could be changes to the backline.

Switzerland are no doubt the underdogs coming into this game, but they will be hopeful of producing a miracle. It was not the best of group stages for the Swiss, but they progressed through as one of the four best third-placed teams. A clash against France would not have been their ideal choice, but nevertheless, they will be gearing up for this game and will aim to give it their all. This just their second time in the knockout stages of the Euros, the previous appearance coming in the Euro 2016, when they were knocked out of the tournament at this exact stage.

The Swiss were in fine form against Turkey in their last group game, with talisman Xherdan Shaqiri coming up with the goods yet again. A brace from the 29-year-old after striker Haris Seferovic opened the scoring early in the first half was enough to send Turkey packing as they cruised to a win. Shaqiri has been his side’s main man so often in the past, and he will once again be the one all Swiss eyes look up to on Monday against a vastly superior side.

Ousmane Dembele limped off just 30 minutes after coming on in the second half against Hungary with a muscle injury and has since been ruled out of the tournament. France have been hit by injuries, with fullbacks Lucas Digne suffering an injury against Portugal, and Lucas Hernandez also a huge doubt for the round of 16 clash. Thomas Lemar suffered a leg injury in training while Marcus Thuram hurt his right thigh possibly ruling them out of the clash against Switzerland too.

Switzerland have no injury issues as of now, and have a fully fit squad ready for selection for Monday night, as they aim to win a knockout round for the first time in a major tournament since the 1930s.

The midfielder has put in three solid displays in three games in the Euro 2020 so far and looks like the most in-form person for France right now. Pogba is one of the most talented players in world football, and his talent was on show against Portugal when he picked out Mbappe and Benzema with some amazing passes that broke the Portugal defence line like a hot knife through butter.

He was unlucky not to get a goal that night when a wonderful save from Patricio denied him. He has a dominating presence in that midfield, and with Kante as defensive cover, he can roam forward freely without having to worry much about defense. His long passes are a thing of beauty and he will be the man to make France tick. Unless Switzerland shut him down completely, he is expected to have a lot of influence on the game.