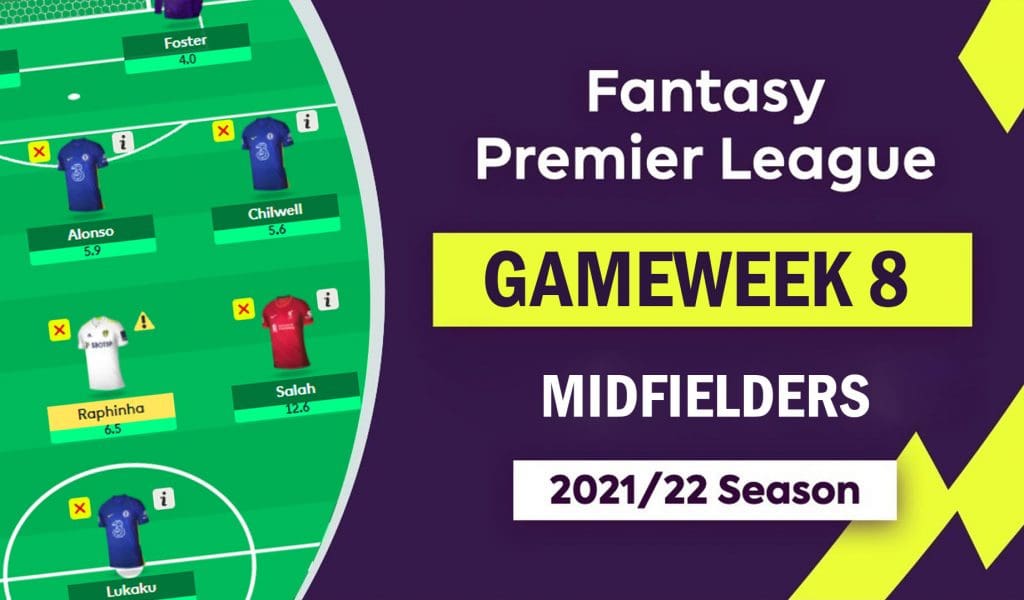 With GW-8 just around the corner, Fantasy Premier League managers will be hoping that their players stayed injury-free throughout the international break and returned to their Premier League teams in time to participate.

For almost everyone, GW-8 arrives far too late after many FPL managers had a poor GW-7, notably when it came to selecting a captain. Thankfully, this week’s matches have a lot of high-scoring promise, so let’s take a look at who should sparkle in midfield this weekend:

This season, the South Korean has been performing splendidly. So far, he has three goals and two assists, and he is emerging to be Spurs’ most valuable asset. Son has produced an xG of 2.36, an xA of 084, 3 big chances, 9 chances, and 10 shots in the box.

In Gameweek 8, Spurs face Newcastle United, who have been among the poorest defensive teams in the league. They’ve given up the most Big Chances (20) while also having the lowest xGC (14.6). The Magpies are also one of just two clubs in the division without a clean sheet.

Last Gameweek, Spurs scored more than one goal for the first time this campaign and performed considerably well. Nuno Espirito Santo’s team appeared to be improving, and Son was once again their key player. The South Korean had two assists and appeared to be the most dangerous player on the field. Son is an excellent choice this Gameweek against a poor Newcastle team, as he also takes corners and free-kicks.

This season, there seem to be no adjectives to appropriately characterize Mohamed Salah. He’s been fantastic in his first seven games, scoring six goals and adding four assists. Salah has managed to pick up four double-digit hauls and has blanked just once. The Egyptian has produced an xG of 5.58, 23 shots in the box, 8 big chances, and 16 shots on target, along with an xA of 3.14 and also creating 4 big chances.

These are frighteningly impressive figures, making him a must-have for our lineups.

In Gameweek 8, Liverpool will visit Watford. The Hornets are among the top five worst defenses in the league as they have conceded 10 goals and have allowed an xGC of 11.4. Liverpool, on the other hand, are the best in the league when it comes to attacking numbers. They have scored the most goals (17) and have the highest xG (18.8).

In a season where it feels like the Brazilian could have added more goals to his tally, Raphinha has still managed to pick up three goals, which is not a bad tally for a midfielder worth £6.5m on FPL. The Leeds winger has produced an xG of 1.88, an xA of 1.66, 24 shots, 7 shots on target, 7 shots in the box while creating 2 big chances and 14 chances.

This week, Leeds United faces Southampton (a), who have likewise struggled at the defense this season. The Saints have given up 18 Big Chances and have an xGC of 11.8. Leeds won their first game of the season against Watford last week, but their offensive statistics haven’t been as good this season.

However, one can anticipate this improvement as the season develops, particularly against inferior opponents. What is evident is that they are continuing to play the same offensive game that brought them so much success last season. They have the players and attacking approach to produce against any opponent, and Raphinha now appears to be their biggest provider of FPL points.