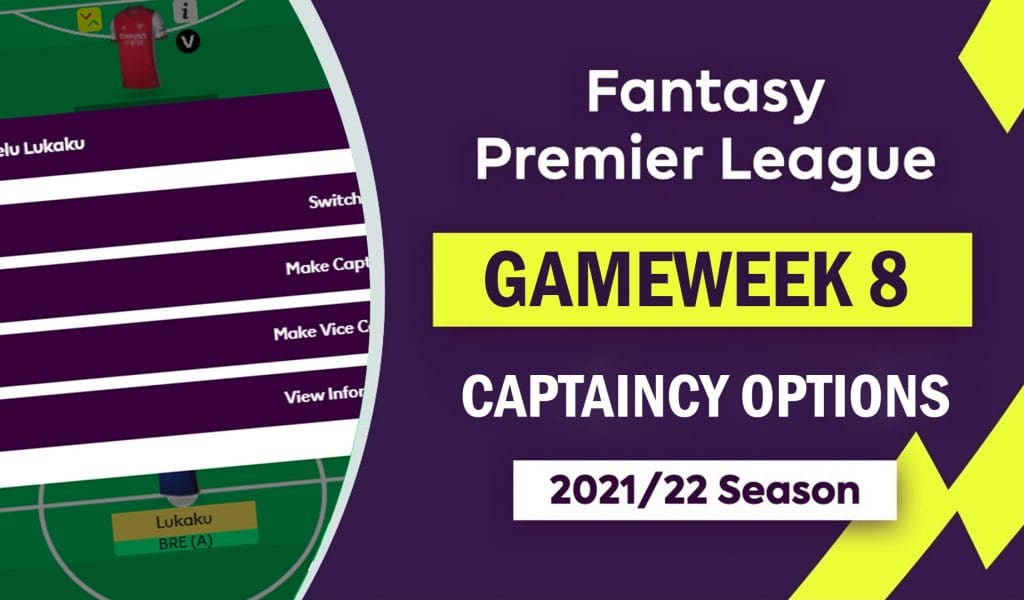 Following a disappointing period of game-weeks vis-à-vis captaincy picks before the international break, FPL managers are, once again, faced with the dilemma of selecting a reliable option for the coming weekend. While Mohamed Salah (£12.7mn) proved his worth against Manchester City, the lack of impressive performances by reliable premiums and differentials resulted in a low-scoring weekend for many Fantasy Premier League managers in gameweek 7.

Now, with several highly-picked premiums doubtful and yet to provide substantial returns for two consecutive game-weeks, the coming weekend could turn the tide vis-à-vis overall rankings this season. Given the multitude of options and relatively friendly fixtures for the majority of premium players, gameweek 8 could change the course going forward, provided one’s asset succeeds in delivering with the armband at the weekend.

Manchester City’s highest-scoring (44 pts.) FPL asset, hitherto, the Portuguese has been one of only three outfield players to have started every game for the club, in the Premier League, this season. Cancelo has been increasingly impressive, having already registered two double-digit hauls whilst keeping five clean sheets during the ongoing campaign.

The Portuguese international has recorded two attacking returns, thus far, and is likely to remain a regular starter for the coming weeks. Cancelo boasts decent attacking numbers, ranking joint-fifth for expected assists (0.9xA) and first for completed passes (20) into the 18-yard-box, amongst his teammates, this season. Additionally, he also ranks fourth for Shot-Creating Actions (15) at the club.

Facing a defensively vulnerable Burnley at the weekend, City are favourites to walk out as victors this weekend. Given City’s formidable defensive record and Cancelo’s willingness to contribute with attacking returns, game-week eighth could prove to be, yet another, satisfactory weekend for the Portuguese international.

The forward has started every league fixture and faces an injury-hampered Manchester United backline at the weekend. Although the Foxes are yet to gain consistent results, the club have scored a goal in every game barring their league fixture against Manchester City in game-week four, this season. Vardy has already registered seven goals contributions and will rely upon to be Brendan Rodgers’ focal point of attack in the coming weeks.

Given their need to find victories and dominate games going into the deep end of the season, Vardy is likely to emerge as Leicester’s most prominent attacker this season. Although 33 years of age, the Englishman could prove to be a portentous captaincy option at the weekend.

Undeniably, the league’s most impressive performer this season, Salah has remained the intransigently FPL asset, hitherto. While most dithered at captaining the Egyptian against a tricky Man City’s side, Salah, once again, reinstated his value, scoring 12 points against the defending champions in game-week seven. Salah has already registered attacking returns in six games and remains the likeliest to provide substantial returns in gameweek eighth.

While his underlying attacking numbers speak for themselves, the Egyptian is already 21 points clear of second-placed Michail Antonio (£8.0mn) in the overall points chart, hitherto. Facing a Watford side desperate to keep a clean sheet, Salah could, once again, provide substantial returns at the weekend. Given the return of Trent-Alexander Arnold (£7.6mn) from injury and the need to continue their unbeaten run this season, Salah could, once again, be the difference for Liverpool in game-week eighth.

Lille rejected Wolves approach for Sven Botman in the summer
The curious case of Raheem Sterling – Why is the England star struggling at Manchester City?
To Top