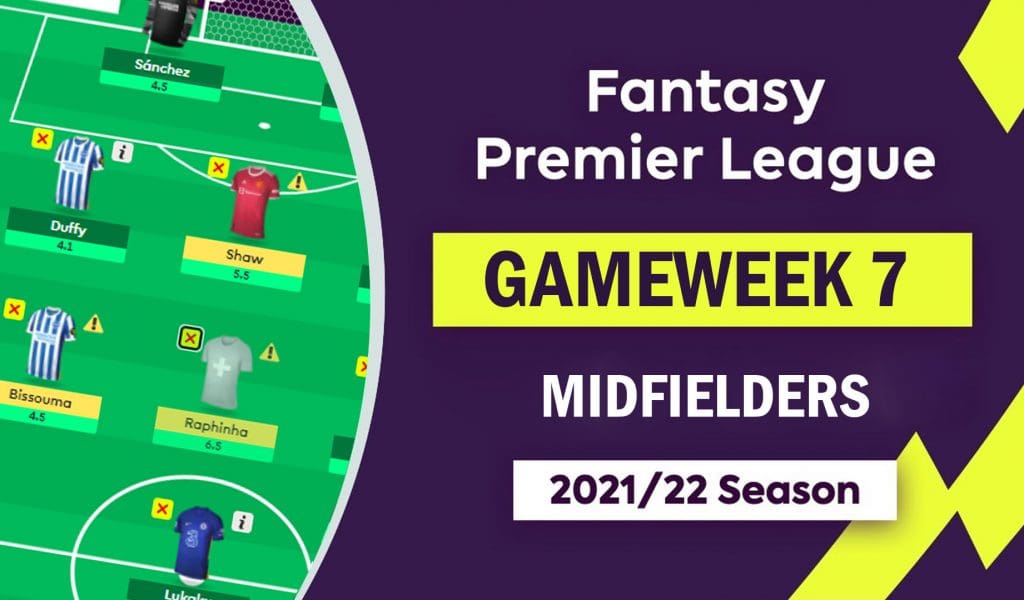 FPL returns this weekend with the seventh instalment of its Gameweeks. A lot of FPL managers will be looking to bring in some quality midfielders given the fact that a few of the most popular ones like Mohamed Salah, Diogo Jota, Kevin De Bruyne and Jack Grealish have a tough matchup as they face each other this weekend. Keeping that in mind, let us have a look at some of the best midfield FPL options for Gameweek 7:

This season, Said Benrahma has become a fantastic alternative. Along with the three goals and two assists in his first six games this season, the Algerian has produced an xG of 1.68, an xA of 1.83, 5 shots in the box, 6 shots on target, while creating 3 big chances and 10 chances.

In Gameweek 7, West Ham host Brentford in London. Thus far, the freshly promoted team has been very solid, particularly at the back. The Bees have one of the best defenses this season. They have allowed an xGC of just 6.5, 9 big chances and have conceded just 39 shots in the box. Their only game where they were not strong at the back was last week against Liverpool.

However, the Hammers have been excellent in the attack as well, and considering their attacking prowess, one should expect this game to have some goals involved too. They have produced an xG of 11.7, 13 goals, 34 shots on target and 60 shots in the box. Benrahma has proven to be excellent value for money, with a starting price of just £6.0 million. His value has increased by £0.5 million as a result of his outstanding performances, and he has paired up extremely well with Michail Antonio (£7.9 million).

Brentford’s defense could be overwhelmed by West Ham’s onslaught, and the Algerian is their best attacking midfielder. For both xG and xA, he is just behind Antonio.

Son has opened the season well for Spurs, netting three goals in five appearances. Given that they have only registered four goals, this is quite astounding and demonstrates that he is now hoarding the points at Spurs. He has been the main creator along with being the top scorer for the Spurs. Son has produced an xG of 1.80, an xA of 0.62, 7 shots in the box, 2 big chances and has also created 7 chances for his teammates.

In Gameweek 7, Spurs play Aston Villa at the London Stadium. Villa have been pretty good in terms of defending this season, allowing an xGC of just 7.2, conceding just 54 shots in the box and 19 shots on target.

So far, the North London club has been one of the league’s weakest attacking teams. They have scored just four goals, which is the third-least total in the league and have an xG of just 5.9 . However, the South Korean has proven to be a deadly finisher throughout his tenure and doesn’t require many opportunities to score. He always outscores his xG, and he appears to be Spurs’ most likely point producer at the moment.

Heung-Min Son can also score FPL points from corners and free kicks, so he has a variety of opportunities. He can contribute to assists as well as score because he has 24 assists in the last two seasons.

Raphinha is starting to find his rhythm this season, having scored three goals in his first six appearances. That’s amazing value at £6.5 million. The fact that he should have a lot more offensive output is both promising and disheartening for owners. The Brazilian has produced an xG 1.83, xA of 1.58, 7 shots on target, 5 shots in the box, 13 chances and 2 big chances. This season, he’ll almost certainly get some large hauls.

Leeds United host Watford in one of the better matchups of the week. Watford have allowed an xGC of 10.1, 47 shots in the box, 14 big chances and have also conceded 9 goals. This season, Marco Bielsa’s team hasn’t been at full steam and has suffered. Despite having a 7.4 xG, they have only tallied 5 goals. What is evident, though, is that they haven’t tweaked their approach to the game and are in the midst of their most opportune encounters so far. Even if they aren’t at their best, they will be able to score a few goals here.