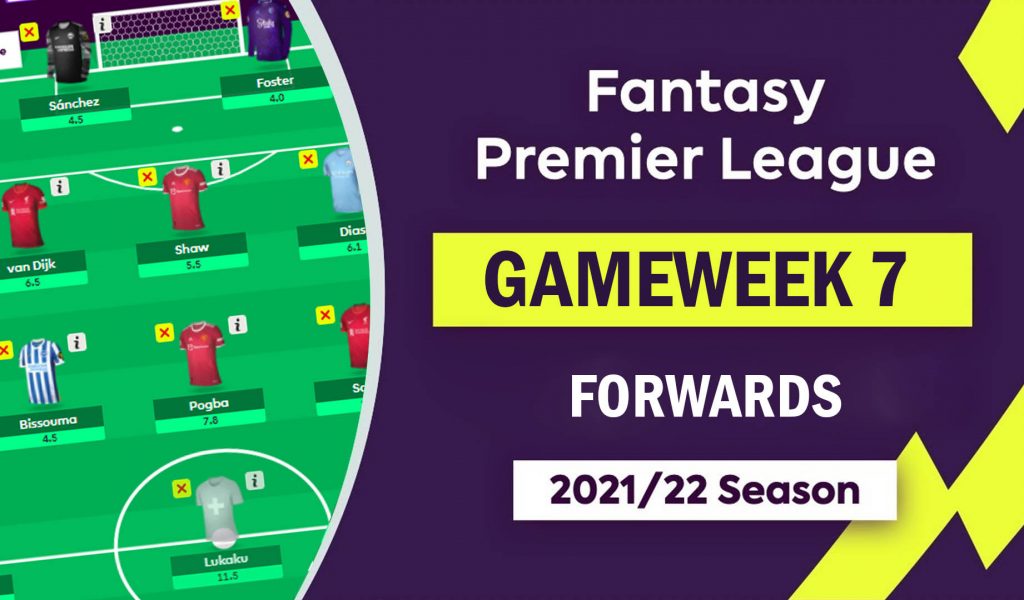 After another intriguing set of mid-week European fixtures, we turn our attention to the weekend as Premier League football returns for gameweek seven before the second international break. Gameweek six posed several obstacles for many FPL managers following surprise absentees and unexpected results across the numerous fixtures.

In the forward position, West Ham’s Michail Antonio (£8.0mn), yet again, proved his worth against Leeds United after the striker netted his fifth league goal of the season last weekend. Although both, Romelu Lukaku (£11.7mn) and Cristiano Ronaldo (£12.7mn) failed to provide attacking returns, Wolves’ Raul Jimenez (£7.5mn) scored his first goal of the season while Jamie Vardy (£10.4mn) continued his excellent form, registering his second double-digit haul of the season against Burnley in game-week six.

Now, with a swing in fixtures already underway and both, differentials and premium options heading into a favourable set of ties following the international break, the upcoming game week offers a tempting opportunity to shuffle the forward line before potentially considering a wildcard in the coming weeks. In an attempt to shortlist the most valuable forwards for the coming weekend, in this article, we take a look at three forwards capable of providing the desired returns and examine their long-term potential ahead of a demanding period of fixtures following the international break.

Having netted his first goal of the campaign against Southampton last weekend, FPL managers are banking on the Mexican to perform to his potential heading into a pivotal period of fixtures within the Premier League. Although yet to significantly contribute through goals and assists, Jimenez’s underlying attacking numbers reflect his desire to create and provide himself with goal-scoring opportunities in the final third of the pitch.

In Newcastle, Jimenez faces a defensively fallible side at the weekend. The Magpies account for the second-highest number of goals conceded (14) while also conceding the second-highest number of shots on target (37) in the league this season. Provided Wolves find their rhythm and succeed in capitalizing on their opportunities in the final third, Jimenez could increase his goal tally before heading into a pivotal set of fixtures following the international break.

Undeniably, the standout player from the ongoing campaign, Antonio’s performances have earned him a glorious reputation amongst FPL managers. The West Ham talisman currently stands as the highest-scoring forward in the league, while also remaining the most consistent in his department. In addition to garnering an invincible FPL reputation, Antonio has fulfilled expectations, having been the only player alongside Mohamed Salah (£12.6mn) and Said Benrahma (£6.6mn) to register three double-digit hauls this season, hitherto.

Facing a formidable Brentford defence, Antonio is, once again, expected to deliver the goods for Moyes’ side at the London Stadium on Saturday. The Jamaican international has been pivotal to West Ham’s creativity in the final third, having registered four assists alongside his five goals this season. Antonio boasts an envious 21 shots from within the box, 11 shots on target, and an incredible number of expected goals (4.75xG) in the ongoing campaign. Additionally, West Ham have also been amongst the most expansive sides across the league, having scored the second-highest number of goals (13) and registered the third-highest number of shots on target (34) this season.

Although facing a Brentford defence that has conceded the fourth-lowest number of big chances (9) and fifth-lowest number of shots from within the box (39) this season, Antonio is expected to be the difference at the weekend. Provided they create and successfully take their goal-scoring opportunities against Brentford at the London Stadium, Antonio is likely to produce an attacking return and a potential double-digit haul at the weekend.

Although yet to produce an attacking return in consecutive game weeks since his initial performances on arriving at Chelsea, Lukaku is likely to emerge as a high-priority premium asset heading into a turn in fixtures starting at the weekend. The Belgian international has been impressive on the pitch, having already netted three goals in five league appearances this season. In addition, Lukaku is also the team’s most probable attacking starter and is likely to significantly increase his attacking contributions in the coming weeks.

Lukaku has been Chelsea’s most lethal forward and already boasts exceptional underlying attacking numbers. The Belgian striker has already recorded 14 shots from the box and six shots on target with a decent number of expected goals (2.17xG) this season. Additionally, he has also created nine chances including two big chances at a noticeable number of expected assists (1.65xA) in the current campaign.

Hosting a defensively vulnerable Southampton at the weekend, Lukaku will be keen on increasing his attacking contributions before heading into the international break. Although having kept two remarkable clean sheets this season, the Saints aren’t the most defensively formidable sides across the table this season. Southampton have conceded 48 shots from within the box and 12 big chances, while Chelsea have already taken 51 shots from the box, created 12 big chances, and scored the same number of goals this season.

Given their need to bounce back following consecutive losses across two competitions, Chelsea will be keen on taking three points at the weekend. Lukaku will be hoping to find the back of the net before the Belgian returns for a favourable run of fixtures following the international break.