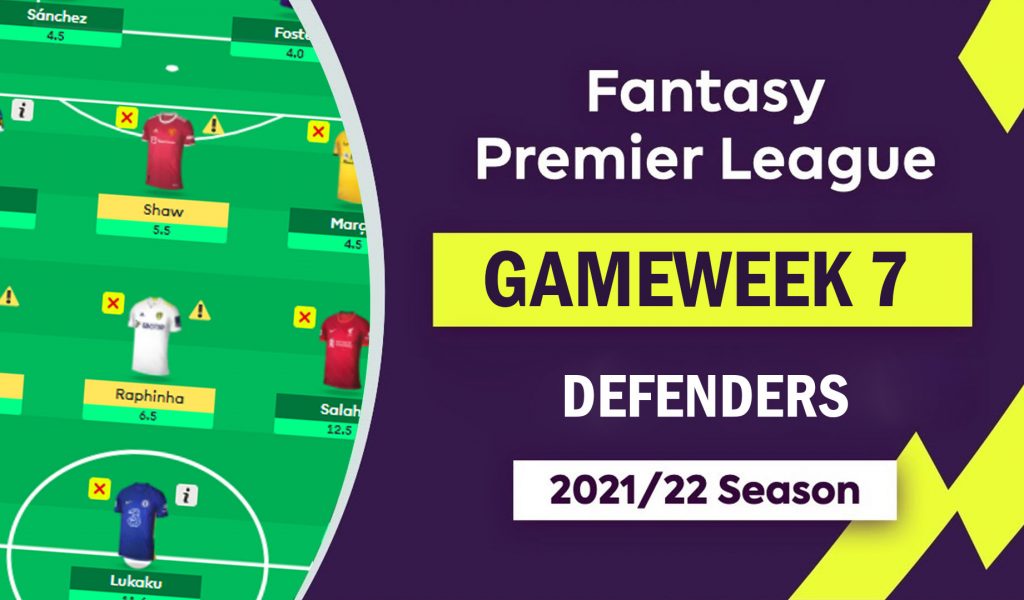 After another intriguing set of mid-week European fixtures, we turn our attention to the weekend as Premier League football returns for game week seven before the second international break. Game-week six posed several obstacles for many FPL managers following surprise absentees and unexpected results across the numerous fixtures.

Although still the two highest picked defenders within the game, both Trent Alexander-Arnold (£7.6mn) and Luke Shaw (£5.5mn) failed to record a clean sheet or pick up an attacking return last weekend, with the former out of contention and the latter remaining doubtful ahead of the forthcoming game-week. Meanwhile, Chelsea suffered their first defeat of the season against Manchester City as Guardiola’s side kept their fifth consecutive clean sheet in the league last weekend.

Now, with a swing in fixtures already underway and managers keen to double-up on consistent assets, game-week seven offers a tempting opportunity to draft in a reliable defender before consideration of a wildcard in the coming weeks. Owing to injury concerns and the appealing range of options across multiple price ranges, defensive cover remains vital ahead of the forthcoming game-week. Hence, in this article, we have shortlisted three defenders boasting immense potential for the coming weeks, and assess their long-term dependence vis-à-vis rotation, fitness, and performance going deeper into the campaign.

Although yet to register an attacking return, despite his threatening runs into the final third this season, Semedo managed to contribute to Wolves’ second clean sheet of the season against Southampton last weekend. The Portuguese has remained a regular starter at right-back and still boats promising potential in the coming weeks.

Semedo has already registered five shots from within the box, created three chances and two big chances this season. Additionally, he also boasts impressive underlying stats for goal contributions with a decent number of expected assists (0.30xA) this season. In Newcastle, Wolves face a defensively underwhelming side yet to keep a clean sheet this season.

Provided Wolves display a dominating performance and succeed in stifling Newcastle’s flair players, Semedo has the potential to finally register his first attacking returns whilst keeping a clean sheet this season. With a favourable set of fixtures until game-week 11, the right-back could prove to be a bargain, given he performs to his potential going into the campaign.

Soaring in reputation since his consistent run of form following the appointment of Thomas Tuchel, the centre-back has emerged as Chelsea’s most rotation-immune defender this season. Alongside Marcos Alonso, Rudiger is the only Chelsea defender to have started every league game this season, thus, succeeding in cementing his spot in the Blues backline for the season.

In addition to contributing to Chelsea’s four clean sheets in the league, Rudiger has also bagged a double-digit haul this season. A formidable performance against Tottenham Hotspur in game-week five saw him score 14 points whilst keeping a clean sheet. Further, being Chelsea’s primary progressive centre-back during possession, Rudiger is likely to contribute in attack and remains a vital target on set-pieces.

Having failed to keep a clean sheet in their last two fixtures, the Blues will be hoping to display a formidable performance at the weekend. Based on the evidence, being the most viable Chelsea asset at the moment, the German offers exceptional value given his team’s ability to win and manage to keep clean sheets this season.

Arguably, the most surprising performer amongst full-backs, Marcos Alonso has remained consistently impressive since the beginning of the campaign for Chelsea this season. The Spaniard’s performances have earned him a call-up to the international squad following an exceptional start to the season.

Alonso has remained a consistent FPL asset, having already bagged two double-digit hauls this campaign. The wing-back has flourished under a suitable system, which has helped him record four clean sheets and two attacking returns already. The Spaniard boasts impressive underlying attacking numbers, having registered six shots from within the box, four shots on target whilst creating 12 chances this season. In addition, he also registers an envious number of expected goals (1.06xG) and assists (0.71xA) in the league, hitherto.

Facing a vulnerable Southampton defence this weekend, Alonso is among those expected to produce favourable returns at Stamford Bridge. Given the need to bounce back following two straight losses across all competitions, Chelsea will be keen on taking three points against the Saints in game-week seven.