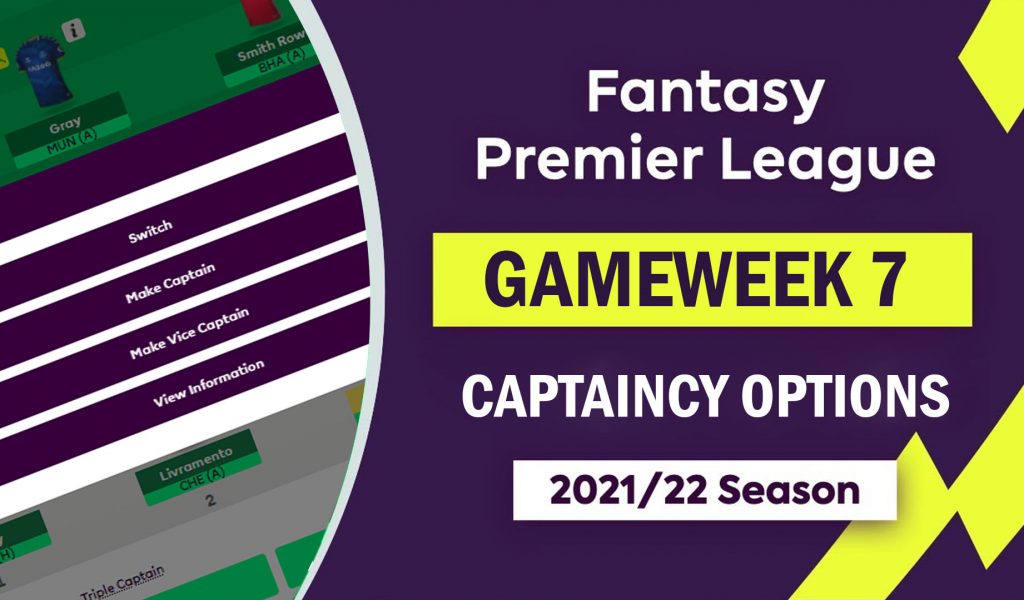 Deciding on your captain for each game week is an important aspect of playing Fantasy Premier League. A significant increase in points can drastically affect your gameweek and propel you up or down the FPL rankings. As a result, selecting the best captain each week is a judgment that should be carefully considered.

In Fantasy Premier League, Gameweek 7 is going to be harsh. There seems to be a lot of injuries, a lot of player uncertainty, and a lot of popular FPL assets canceling each other out as Liverpool and Manchester City meet in a single match. This is likely to be one of the most difficult gameweeks ever, with a significant level of unpredictability. There is plenty to gain and much to lose.

Keeping that in mind, let us have a look at the best captaincy options for your FPL teams this Gameweek:

Over his first five Premier League matches, the Belgian has so far faced Liverpool, Manchester City, Tottenham, Arsenal, and Aston Villa. Despite having such a challenging sequence, Lukaku was still capable enough to score three goals. Lukaku’s and Chelsea’s schedule is now a lot easier, commencing with a match against Southampton at home on matchday 7. The Saints have been unable to win a league game this season, and while they have earned four draws, they have still conceded seven goals.

In Gameweek 7, Chelsea host Southampton at Stamford Bridge, in what appears to be a very appealing matchup for the Blues. The Saints have given up an XGC of 8.3, 12 big chances, and allowed 48 shots in the box.  Chelsea have scored 12 goals, notwithstanding a difficult start to the season. They have also produced an xG of 9.0, 51 shots in the box, and 12 big chances. They are now on a really good run of games, commencing with Ralph Hassenhutl’s side.

This season, Lukaku will be Chelsea’s beacon of light. His statistics over the last few seasons suggest that he is a top choice who can score and assist.

Son has opened the season well for Spurs, netting three goals in five appearances. Given that they have only registered four goals, this is quite astounding and demonstrates that he is now hoarding the points at Spurs. He has been the main creator along with being the top scorer for the Spurs. Son has produced an xG of 1.80, an xA of 0.62, 7 shots in the box, 2 big chances and has also created 7 chances for his teammates.

In Gameweek 7, Spurs play Aston Villa at the London Stadium. Villa have been pretty good in terms of defending this season, allowing an xGC of just 7.2, conceding just 54 shots in the box and 19 shots on target.

So far, the North London club has been one of the league’s weakest attacking teams. They have scored just four goals, which is the third-least total in the league, and have an xG of just 5.9. However, the South Korean has proven to be a deadly finisher throughout his tenure and doesn’t require many opportunities to score. He always outscores his xG, and he appears to be Spurs’ most likely point producer at the moment.

Heung-Min Son can also score FPL points from corners and free kicks, so he has a variety of opportunities. He can contribute to assists as well as score because he has 24 assists in the last two seasons.

Michail Antonio has been a godsend for FPL managers this season, and he’s a brilliant captain’s pick again this week. Antonio is now the game’s leading scorer in the forward position. At the time of this post, he has an xG of 4.75 (2nd) in the PL and the third-highest xA of any forward in the league in 2021/22. He has also produced 21 shots in the box and 11 shots on target.

While Brentford, West Ham’s opponents this week, have had a solid defensive background in the past, their 3-3 tie with Liverpool in GW6 demonstrated that they are more than ready to concede goals when against the correct offence, which Antonio and his teammates should be. Thus far, the freshly promoted team has been very solid, particularly at the back. The Bees have one of the best defenses this season. They have allowed an xGC of just 6.5, 9 big chances, and have conceded just 39 shots in the box. Their only game where they were not strong at the back was last week against Liverpool.

With such a variety of attacking talent, the Hammers have become one of the finest offensive teams at the moment. West Ham have scored the second-highest goals in the league this season (13), along with an xG of 11.7, 60 shots in the box, and 34 shots on target.

Antonio has proved that he is virtually unaffected by any of the teams he faces and can score against any opponent. His overall stats are top-notch, and he ranks among some of the league’s finest. Antonio has not only established himself as one of the finest FPL forwards for Gameweek 7, but he is also skilled at scoring 20 league goals every season if he can remain fit. He can also assist, making him ideal for FPL.