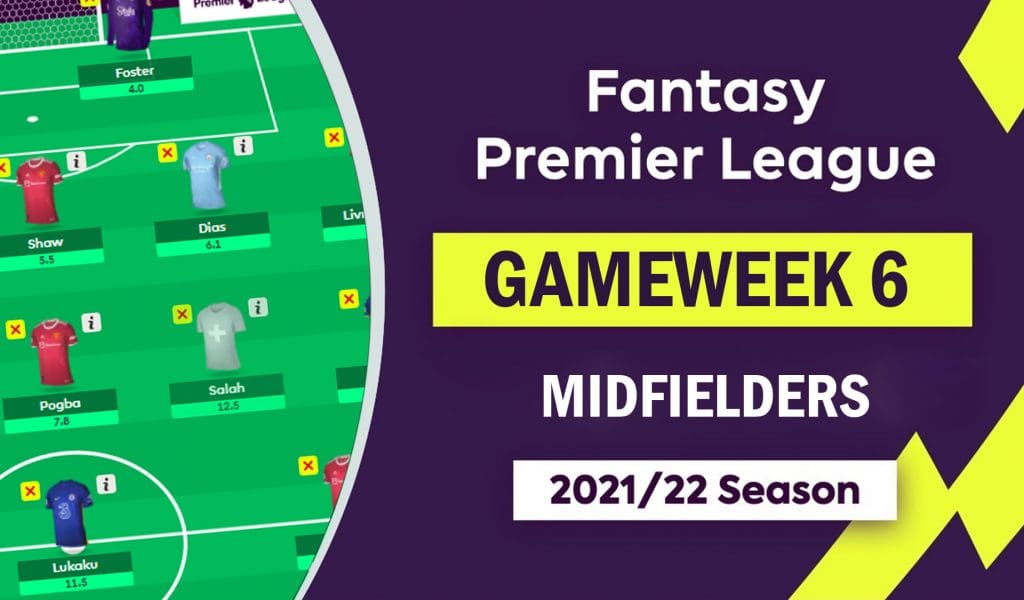 Unexpected absentees, a lack of cutting edge, and unfavourable outcomes culminated into an eventful low-scoring game-week five, as FPL managers look to launch a counter-attack with a turn in fixtures on the horizon. Liverpool’s Mohamed Salah (£12.6mn), once again, emerged as the saving grace last weekend owing to his 12-point haul against Crystal Palace at Anfield. Additionally, while his potential challenger for the golden boot in Romelu Lukaku (£11.6mn) failed to produce returns last weekend, Cristiano Ronaldo (£12.7mn), continued his excellent form, netting his third goal in two starts for Manchester United.

Now, with an exciting turn in fixtures for formidable sides such as Chelsea, Leeds United, and Wolverhampton Wanderers, the coming weekend serves as an excellent foundation to reconsider or build on one’s long-term strategy for the coming weeks. While the consideration to roll a transfer holds reasonable value, game-week six offers a tempting range of fixture-dependent options across the midfield.

Hence, in this article, we take a look at three midfielders offering the best potential value/returns in the game week and examine their long-term potential considering a favourable turn in fixtures for several sides following the weekend.

Coming off an exquisite match-winning performance against Norwich City last weekend, the Senegalese international offers excellent value owing to a healthy run of fixtures. Sarr produced a scintillating 15-point haul against Norwich and remains Watford’s most potent threat upfront. His 30 overall points make him the best-performing asset in his price range, while his underlying stats add to his prospects ahead of a favourable string of fixtures.

The Senegalese’s boasts the sixth-highest amount of shots (11) from within the box and ranks second for shots on target (9) this season. Additionally, Sarr boasts an excellent expected goals percentage (2.75xG) and has created nine chances with a decent number of expected assists (0.83xG). The winger is also the hornets’ primary penalty taker, thus, making him a strong contender for a midfield spot heading into a pivotal game week for FPL managers.

In Newcastle United, Sarr will be up against a fallible defensive side. The visitors have conceded the second-highest amount of goals (13) and record the worst percentage of expected goals conceded (12.4xGC) in the league this season. In addition, they have also conceded 33 shots on target and a total of 52 shots from within the box. As a result, considering a fragile backline alongside a decent run of fixtures post the international break, Sarr offers exceptional value for his price range and is capable of outscoring several higher-priced preferences in the forthcoming run of fixtures.

A surprising outcome saw the West Ham midfielder produce a double-digit haul against Manchester United last weekend, making him the second-highest scoring midfielder (39 pts.) in FPL this season. Despite a stagnant start to his career at West Ham last season, the Algerian has continued to impress since the commencement of the current campaign, having already scored three goals and recorded two assists to his name this season. And, with a wounded Leeds backline to face at the weekend, Benrahma, yet again, emerges as a favourable option in the midfield department.

With Michail Antonio (£7.9mn) set to return this weekend, Benrahma remains the pick of West Ham’s midfield options. The Algerian has already created seven chances, including two big chances at a decent number of expected assists (1.30xA). Additionally, he has also registered four shots from within the box and five on target with a tempting expected goal percentage (1.50xG).

Further, despite their lack of depth in the forward line, West Ham boasts exquisite attacking numbers, registering them as favourites against a defensively vulnerable Leeds set-up. West Ham have scored the third-highest amount of goals (11), and had the fourth-highest amount of shots in the box (49) and on target (27) this season. Meanwhile, Leeds have conceded the most amount of shots from within the box (62) and shots on target (35), and the third-worst number of big chances (13) in the league this campaign.

Hence, considering a favourable fixture for attacking returns and a decent run of games following the international break, Benhrama remains a tempting prospect in the midfield, and could potentially be subject to a rise in value in the coming weeks.

Despite only registering his second attacking return of the campaign against Newcastle United last weekend, Leeds’ Brazilian forward remains a strong contender for a midfield spot. Since the start of the campaign, Raphinha has been Marcelo Bielsa’s most threatening attacker on the eye, and facing a strong, yet, underperforming backline of West Ham at Elland Road this weekend, the Brazilian has the opportunity to add to his tally of attacking returns this season.

Raphinha has registered five shots from within the box and the same number of shots on targets, scoring two goals, this season. Although yet to record an assist, the winger has created ten chances and one big chance, so far, this campaign. While Leeds haven’t been the most prolific in defence, Bielsa’s side remains a threat in the opposite end of the pitch. In West Ham, they face a side who have conceded the fifth-highest amount of goals (8) and eighth-highest amount of shots (41) from within the box this season.

As a result, considering a favourable tie at the weekend followed but a scintillating run of decent fixtures going into the international break, Raphinha emerges as a valuable pick amongst a tricky bunch of midfield assets for the coming weeks. The Brazilian certainly boasts a healthy potential and could produce favourable returns at the weekend.

Charlie Patino: The Rolls-Royce midfielder Arsenal have been brewing in their ranks
Thomas Tuchel’s tactical tweak that toppled Tottenham: & what it bodes for the Blues for the rest of the season
To Top