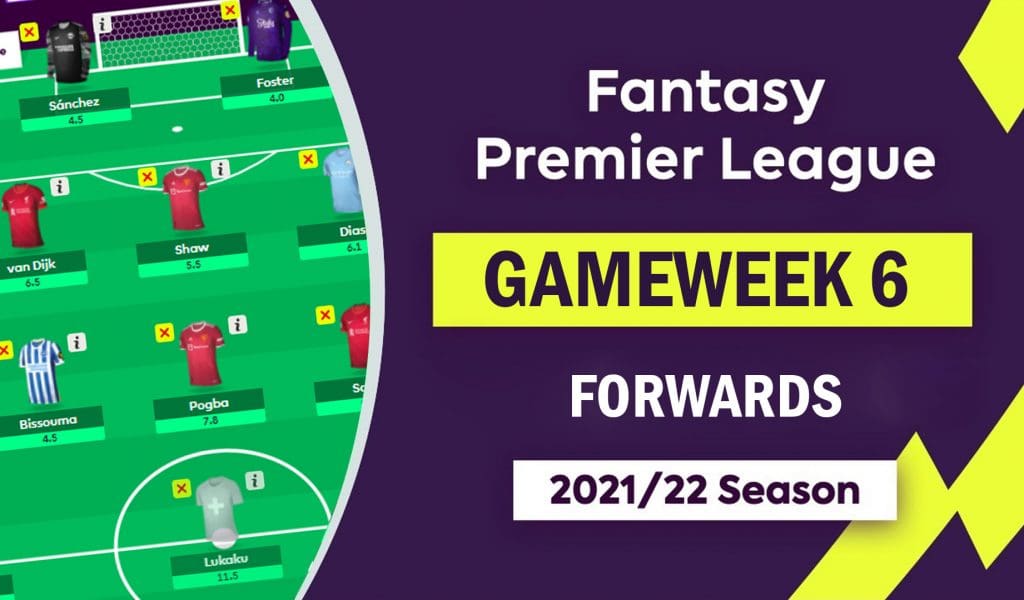 Owing to the rapid transition, FPL Gameweek 5 just ended a few days ago and Gameweek 6 is almost here. Last week, Southampton drew away from Manchester City, dropping them out of the top four and allowing Brighton & Hove Albion to join Liverpool, Chelsea, and Manchester United in the European places.

However, it is time to focus on the upcoming gameweek, and keeping that in mind, let us have a look at the best forwards for your FPL teams for Gameweek 6:

Despite his untimely red card in Gameweek 4, Antonio remains the game’s top scoring forward. With four goals and four assists, he enjoyed a fantastic start to the season. Despite skipping a game due to his ban, he has an xG of 3.60 (3rd) and an xA of 1.99 (4th). He still remains a must in FPL until he stays match fit. In Gameweek 6, West Ham will face Leeds United, which is a dream match for the Jamaican. Both teams are strong in the offensive zone, and as expected, one can expect this to be a high-scoring game.

West Ham have one of the best-attacking records in the Premier League this season. They have the fourth-best numbers in the league in terms of shots in the box (49), shots on target (27), and an xG of 9.9. They have also scored the third-most goals in the league with 11.

Leeds, in similarity to the previous season, have some of the league’s poorest defensive statistics. They have the league’s second-highest xGC while also allowing the most shots in the box (62) and also the most shots on target (35). These figures are highly promising for Antonio and his FPL owners. His numbers and productivity have been among the greatest in the league, and he is currently the most valuable player in the game.

This season, Allan Saint-Maximin has established himself as a valuable FPL asset. After five gameweeks, I don’t think many people anticipated him to have such a strong start and be considered a forward alternative.

The Frenchman has scored two goals while also providing his teammates with two assists. He has produced an xG of 1.22 along with 6 shots in the box and 5 shots on target. He has also produced an xA of 1.46, 11 chances, and 2 big chances. With Callum Wilson presently sidelined, he appears to be Newcastle’s sole realistic attacking option. He is their new talisman, not only producing goals but also orchestrating games for Steve Bruce’s team.

In Gameweek 6, Newcastle faces Watford at Vicarage Road. Watford have conceded 8 goals while also allowing an xGC of 8.1 and conceding 11 big chances. Both clubs aren’t particularly strong on defense and appear to be closely matched. According to statistics, Saint-Maximin appears to be the most likely to win the match. He also appears to be a mainstay in Newcastle’s starting lineup, having started and completed 90 minutes in each premier league match thus far.

Ronaldo has now struck three goals in Manchester United’s opening two league games. He has definitely gotten off to a fast start, and his stats have been fantastic. The Portuguese striker has the best-attacking numbers in the league, which include the highest xG (2.76), the most shots in the box (12), the most shots on target (7), and the most big chances (5).

In Gameweek 6, Man United host Aston Villa at Old Trafford, and this appears to be another opportunity for Ronaldo to add to his goalscoring record. United have one of the best-attacking statistics in the league as well, with the most goals scored, an xG of 10.4, 54 shots in the box, 32 shots on target, and 15 big chances. In these parameters, only Liverpool and Manchester City are clear of them.

Aston Villa’s defensive numbers have been pretty decent this season. They have allowed an xGC of just 5.2 alongside just 15 shots on target and 37 shots in the box. However, it seems like keeping United silent will be a tough job for them. Since his return, the Portuguese has put up the best offensive figures in the league, and he is the sort of player who gets opportunities in most games because he spearheads the onslaught in such an attacking side.